Environment: Windows 10
Question: If possible - how do we set the name of the top-most folder on a drive as a variable?

We receive a disc from a third-party that contains updates to a system we use - on the disc is a folder with the current version's title (e.g. blahblahSystemblah-2018October-finalblah) and it contains all of the data in that version. After we put the disc in the system we use robocopy to update the server with the changes, and then users who run the system after that are updated by the server. Our current issues are that we have to set the folder name manually since robocopy can't (to my knowledge) use a wildcard in it's source, the folder name is important elsewhere so we cannot simply get them to put the contents directly on the disc, and ideally we'd like to not have to move the batch file before running it (using current directory would be easy, but as I said: the folder name is important, and we're trying to keep any manual input/effort from users to a bare minimum).

The relevant part of the script would look like this:

The closest thing I could find to getting there is this piece of script, where "knownfile" is the name of a file that will always be in the folder:

-- but this script spits out more than just the folder with that known file, and it also clips the first character of the folder name. I'll be the first to admit that I do not fully understand the syntax or where it's going wrong, so if anyone could point me in a better direction or help me refine the above code to only return that one folder, it would be very much appreciated.

You can use something as simple as: 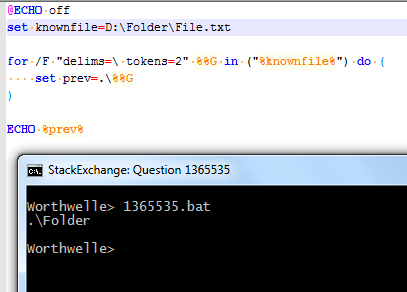 With for /R, you're walking through a directory tree, whereas for /F is simply processing a string and splitting it at the \ character.

tokens=1 tells it to use the first portion of the string. If you wanted to use any folders after that, you could do that by using tokens=1,2,3 and then set prev=.\%%G\%%H\%%I

Not the answer you're looking for? Browse other questions tagged windows windows-10 script batch-file or ask your own question.

0
Having a problem executing .bat file (sub-menu) through .bat file (menu)
2
How do I open a random file in a folder, and set that only files with the specified filename extension(s) should be opened?
2
Fast NT batch script for determining path lengths in a folder
5
Name of user profile folder on Windows 10
3
Windows batch: Get the first folder name starting with some value?
3
Need .bat that will make folder based on filename
0
Escaping Parenthesis within a file path Parameter in a batch script