How to stop web site navigation hover pop-ups in browser

I've run into an annoying type of pop-up and can't figure out how to suppress it. The problem is links at certain sites related to web site navigation that activate when you hover on them. It happens with all browsers. I don't recall this behavior previously, but I'm suddenly running into it with multiple browsers and multiple sites.

The amazon.com and walmart.com sites are at least two where I'm running into this. On both, there is a row of shopping "helper" links (circled in the pictures below), near the top of product pages. These are site navigation menus. If you click on one of those links, it takes you to a dedicated page.

But there's a hover "feature". If you hover the mouse over most of these links, it pops up a window with a menu of links, an abbreviated version of the "click-on" page. That window covers a large portion of the screen, and remains displayed as long as the mouse is over any portion of the pop-up window. There are other similar "hover booby traps" scattered throughout the page.

The problem is that there is no hover delay, so merely passing over one of these links is treated as a hover. Accidentally passing over anything in this mine field suddenly obscures the page with a giant navigation menu (or other content), that continues to block the page until the mouse cursor is moved outside of that window. Even worse, I sometimes find myself on a new page related to some garbage in the pop-up window.

My main browser is Firefox (V62), but I've replicated it with Chromium and Vivaldi, in both Windows 7 and Linux, as well as Internet Explorer in Windows. Daniel B commented that he also replicated it with Edge. (Earlier, it appeared that the Microsoft browsers behaved differently, but that turns out not to be the case.)

I've discovered that reproducing the problem isn't as straightforward as I thought. The web sites appear to tailor the content based on your prior history on the site, whether you're logged into the site, and even the route used to navigate to the product page (likely the source of earlier confusion in replicating the symptoms).

I'll provide a specific link for each site as an example, but the variation may limit some reader's ability to answer. For example, I tested the direct links below on my wife's computer and got different page features before noticing that the site had "remembered" her, and automatically logged her in. The screens changed when I logged her out.

Here is a product page at walmart.com, with the shopping helper row circled:

Hovering or passing over one of the circled links:

Here is a product page at amazon.com with the shopping helper row circled: 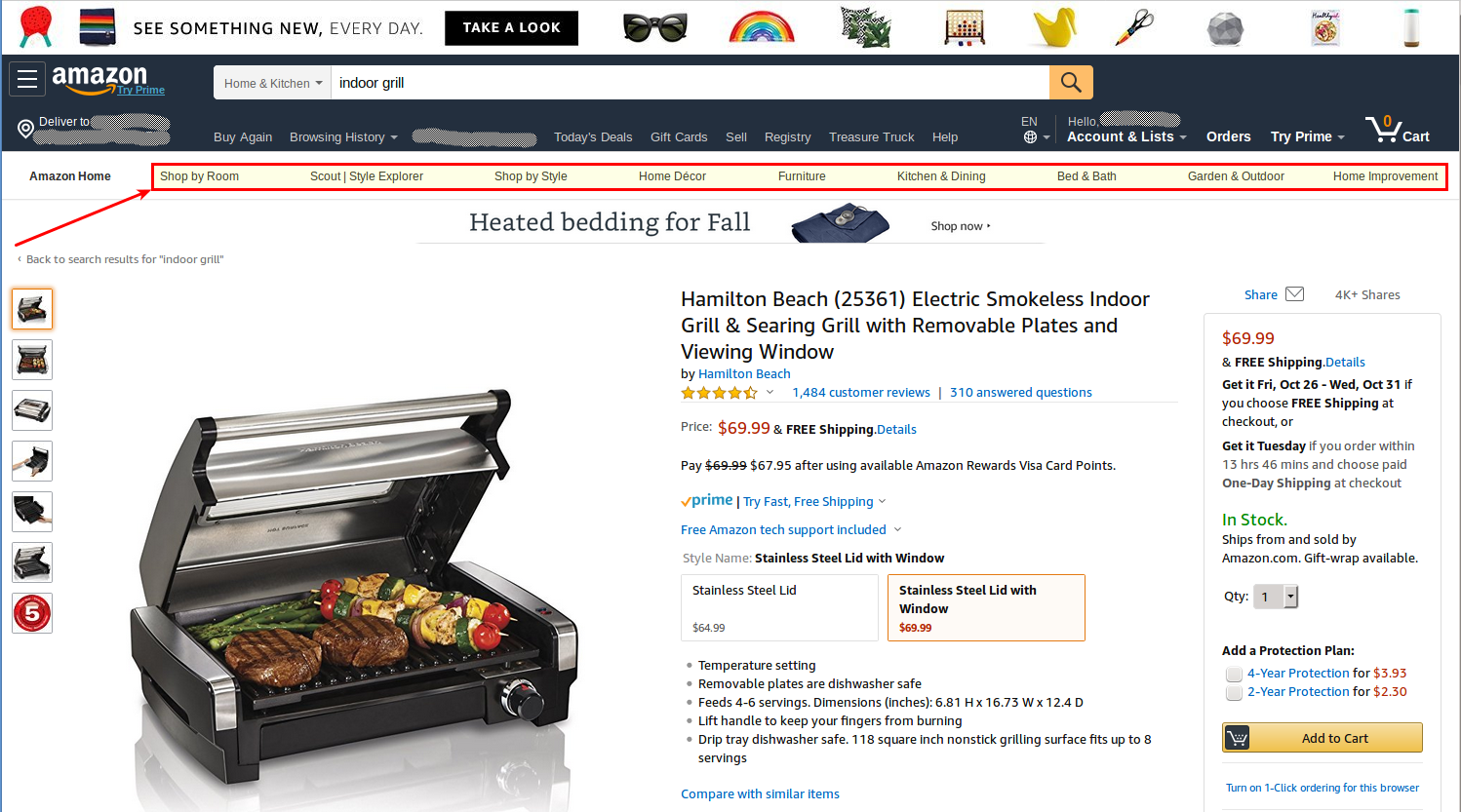 Hovering or passing over one of the circled links: 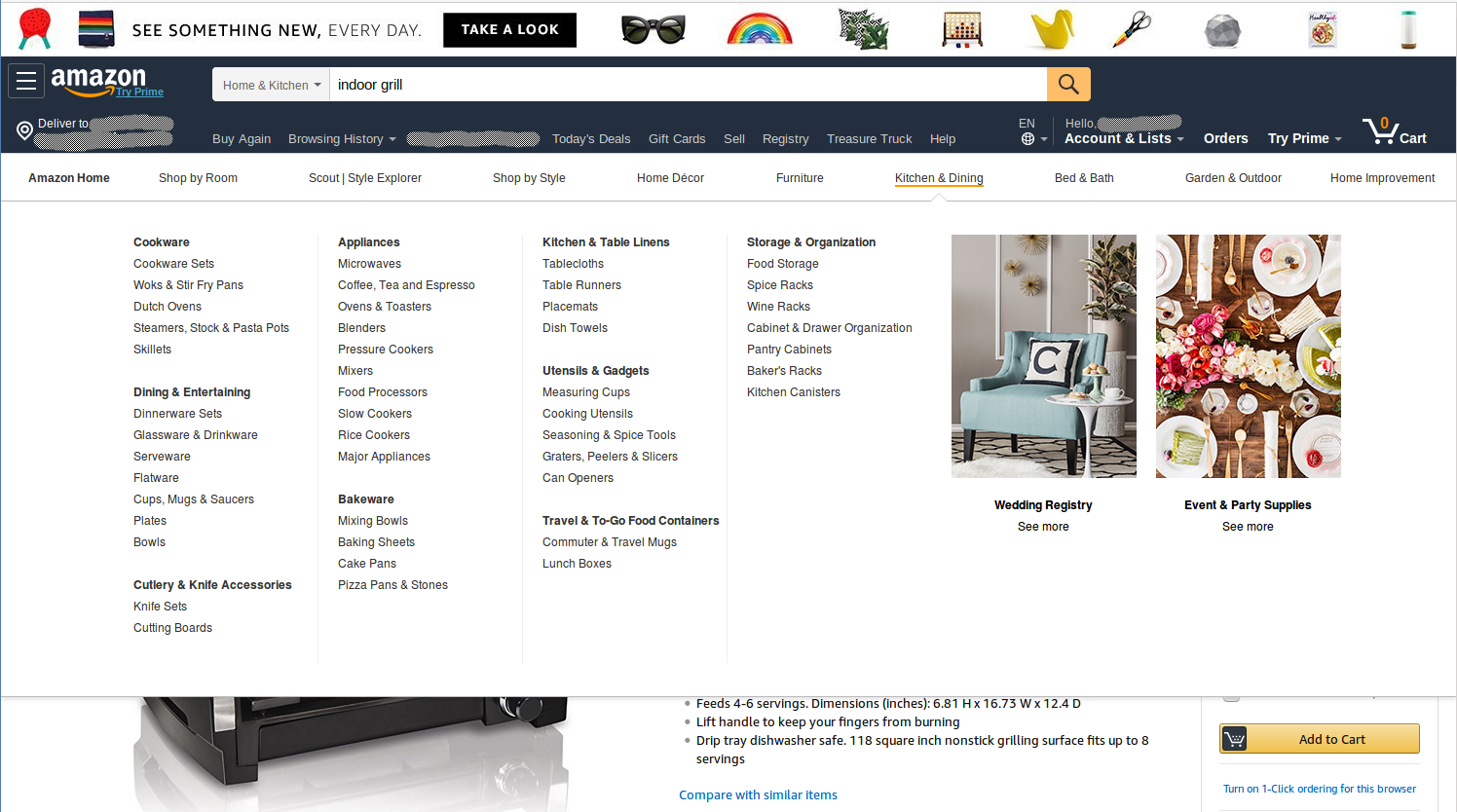 On all product pages at Amazon, regardless of route, the Account & Lists link in the upper right exhibits the hover action, but I can't be sure it is the same mechanism.

Researching this, I haven't found online discussion about this problem with navigation menus (but it does seem to be very recent, which may also be indicated by the fact that going to a product page via an old bookmark or history link often doesn't exhibit the symptom, but getting to the same page via a fresh search does). There is, however, discussion related to pop-ups of other kinds, with solutions such as:

What you describe appears to be a natural design of website navigation/design and the browser simply following what your mouse is asking of it - to show a navigation menu when your mouse hovers over an element designed to fire the showing of the element, and when the mouse leaves the trigger element(s) the content disappears (or hides).

Having content flash open/closed whenever the user did not intend for this action - e.g. when simply moving their mouse about the screen for any reason than not wanting to navigate the site - prompted a solution. From as early as I can remember, it is called hoverIntent (demo: https://briancherne.github.io/jquery-hoverIntent/). A jQuery plugin that developers can include into their source code that can target elements and, when the target element is hovered over for a defined minimum amount of time, fire the hover effect desired by the developer - for example, show a navigation menu.

A demonstration of the problem, although specifically not using the original hoverIntent plugin, can be demonstrated here (source: http://www.csslab.cl/2015/05/07/hover-intent-moderno-en-menues-dropdown/)

Unfortunately, as the functionality of the website is entirely at the mercy of the developer(s), it is very difficult to override intended functionality without the use of browser plugins. One such plugin, which seems to offer the ability to selectively override JavaScript and CSS for individual sites, is Kyle Paulsen's Resource Override, at least, for Chrome (https://chrome.google.com/webstore/detail/resource-override/pkoacgokdfckfpndoffpifphamojphii?hl=en).

Kyle Paulsen provides a YouTube tutorial which goes through all the possible capabilities - looks a very promising solution and looks like it could be fairly easy to pick up: https://www.youtube.com/watch?v=62QIWAP9mMM.

Not the answer you're looking for? Browse other questions tagged browser chromium popups webpage firefox-quantum or ask your own question.

10
Is Chrome's popup blocker working at all?
4
How do I prevent a web page from directly embedding data from other external sites?
3
Why does IE (7, 8, 9, 10) make me refresh the entire page if I want to allow blocked pop-ups?
2
How to block a particular pop-up window from opening?
3
How to block all in-page pop-ups?
2
How do I stop popunders in Firefox that resist ad blockers?