Corrupt .zip file after being downloaded by Netcat

I create a .zip file with WinRAR on my Windows, it can be opened and extracted on Linux as well as Windows if I transfer it via mail or any other common way.

But when I transfer it via Netcat, the zip file gets damaged.

On Linux, when I try to extract the netcatted file with 7z, I get errors like:

I move that same netcatted zip file back to windows and try to open it, I get error:

The zip file in question contains a folder, which contains files.

My linux machine is the listener, I used this netcat solution: HERE

I thought that may have been the problem, so I just used the basic solution:

Note that I had no problem transferring text files, just zip files.

Below is the comparison of the same 2 zip files, the left one is transferred via netcat (can't be opened by either Linux or Windows), the right one is via mail (can be opened by both). They were opened in gedit.

What am I doing wrong and how to make it work? 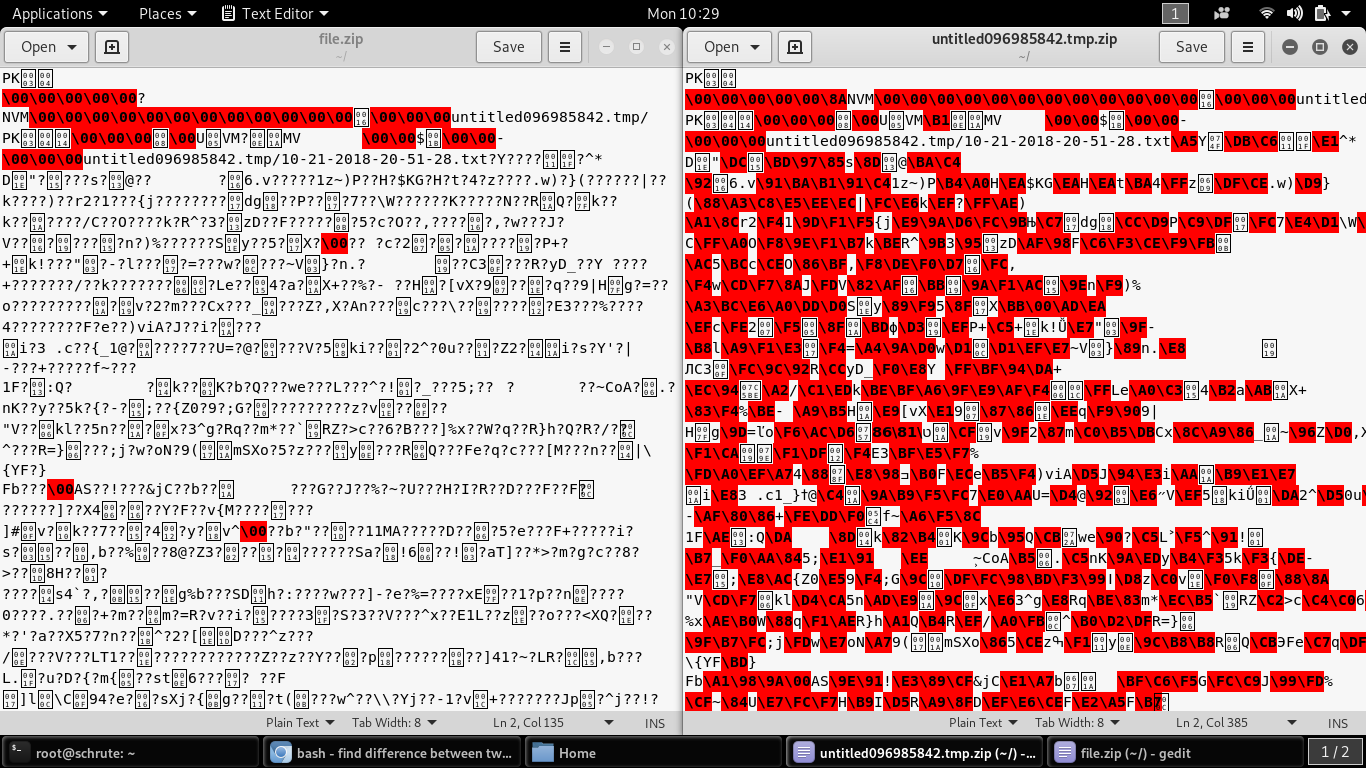 EDIT: According to Kamil Maciorowski I've tried to send the zip file through netcat as an stream of bytes, using this code in Powershell, Windows:

Now on the linux machine I have a zip file that is 6 times the original size (which is no problem), and its contents are 1-3 digit numbers in each newline. (But shouldn't they all be in 1 line because I used the -ReadCount 0 tag? (see -ReadCount HERE)

I cannot open that file. Trying to extract it I get an error: "Is not an archive".

Typing the linux command file to see the file type of "file.zip" I get: "ASCII TEXT, with CRLF line terminators"

I booted another linux (as client), tried transfering the SAME problematic zip file that has been originally created on windows, and it worked without problems.

I booted back into windows and tried the following commands in cmd.exe:

I tried the same on powershell. I even tried using get-content with all the available encoding types (unknown, utf8, unicode...). No success.

It seems that the problem is in powershell and its own cat command synonyms (gc, get-content, type, cat)..

OK, I have to run the command via cmd.exe, but I wish to run the cmd.exe command inside powershell if possible.

My current solution that works is to have a .bat file with the whole command, which is called inside of powershell... But I'd be glad to have a cleaner option.

EDIT 3: No need for a .bat file... I had problems with invoke-command, invoke-expression, start-job... but this command worked successfuly:

Problem was in the way the Powershell Get-Content command works, so I had to use solutions in cmd.exe

I will wait 1-2 days for a powershell solution before I answer the question.

The problem was not in Netcat, but in the way PowerShell's command Get-Content works.

What was as easy as cat file.zip > newfile.zip in Linux creates a corrupt zip file on Windows with the PowerShell alternative Get-Content file.zip | Out-File newfile.zip

I have yet to figure out how to use it. It probably an encoding problem. (But I've tried all types of encoding with the -Encoding tag). And since no one answers, I'll close the question.

Not the answer you're looking for? Browse other questions tagged linux windows powershell zip netcat or ask your own question.

1
Uncompressing a .zip file in Linux
5
Restoring ancient zip file spanning floppy disks: pkzipfix equivalents?
5
Windows zip error: Windows cannot complete the extraction. The destination file could not be created
0
Piping commands into a NetCat shell on a Windows machine from Linux?
0
Connection timed out for netcat after opening port in router
3
Proper encoding for file names in zip archives created in Windows and unpacked in linux
0
Receiving multiple files at once in Netcat without overwriting last file
3
Zip file made in Powershell can't be used in Linux
0
Zip file corrupted after SSH file transfer
3
How does a zip utility identify the file content and why .exe files can be unzipped?