What is the Windows Projected File System?

In the latest builds of Windows 10, there is a new feature, in Beta, called Windows Projected File System. I cannot find any information on Google, other than programming APIs that do not make sense to me.

What is it, and what kind of users would it be targeted for? 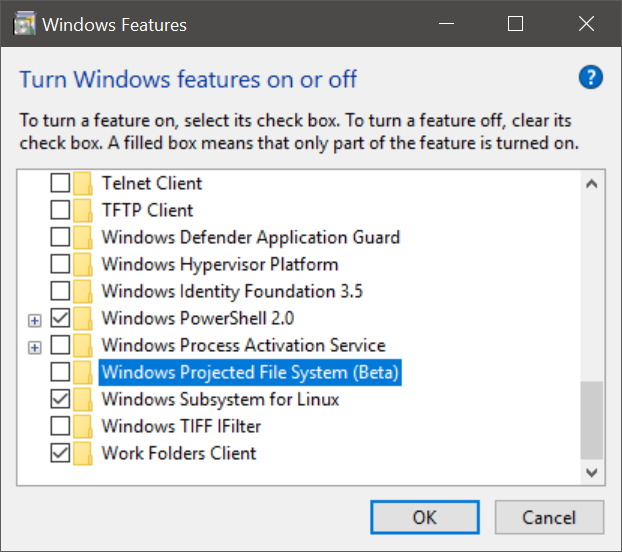 Projected File System aka ProjFS is a feature similar to FUSE found on Linux (or to Dokan & WinFSP). It allows apps to create virtual file systems which appear indistinguishable from local folders, but their entire contents are generated "live" by the program. (In other words, you're seeing projections of files which might not be there.)

The primary use of ProjFS is Microsoft's "Git Virtual File System", an addon to the Git version management tool aimed at increasing its performance and reducing disk space usage when dealing with massive repositories. (Git was built for repositories containing just tens of thousands of files, such as Linux.git; but Microsoft have started using it internally for the Windows source repository, which is several orders of magnitude larger.)

Currently ProjFS doesn't seem to be publicly documented, but I expect that sooner or later third-party developers will figure out how to use it as a FUSE alternative for implementing such virtual filesystems as sshfs, ftpfs, and so on.

Note: Projected File System has nothing to do with Windows File Protection.

As noted in the comments, documentation is now available for the feature.

Windows Projected File System is not an alternative to FUSE or Dokan.

It appears to be similar to FUSE and Dokan at first glance, even using callbacks to populate the file list, and read data from files.

However, once you read a file, the projected file is replaced with a physical file on your hard disk, which will stay on the disk.

46
Is it possible to use FUSE with Windows?

4
Windows 10 File History: How include other folders in backup?
3
What is written in the EFI partition ? In details
1
What is this Instaero folder in the root of my C: drive?
2
How to fix "This build of Windows will expire soon" after switching Windows Insider Program channel from Dev to Beta?
1
System can not find a file that exists