How to find geolocation of a photo in Linux?

I have taken some photos on my Ubuntu machine, and I'd like to know whether they contain geolocation, and if so, what are they.

How can I do that?

exiftool can be used to print out the metadata of the image. If the location was stored when the image was taken (usually called 'geotagging'), you can find it there:

You can also use exiftool to strip the GPS information out of an existing image:

Any tool that can look at image metadata can look at this information. For example, the identify tool from ImageMagic will also do it:

and GUI tools can often do so as well - here's Image Viewer from Ubuntu 18: 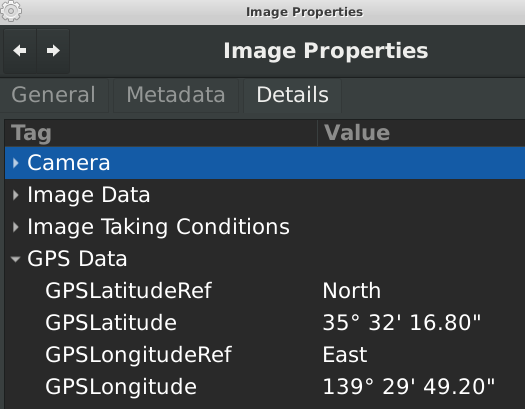 Many images do not have GPS entries in their metadata - for example, if you take a picture with a camera that doesn't have GPS, it won't store it - here's a list of cameras that do have GPS.

Most cell phones, of course, have a GPS, and often will geotag by default. You can choose to disable this in Android and iPhones.

This command will check your photos in a directory and looks up whether Geo tags are saved in Exif. It will report those where data was found:

If you want to automatically parse the geo information in computer-readable format in order to further process the coordinates, you can use this

This tool (bash script) does it automatically on the file that is passed to it as argument: https://gist.github.com/pas-calc/0e6063affa749fedc2e51cea88345929 . The results will be displayed on the Geo Tool website.

Not the answer you're looking for? Browse other questions tagged linux geolocation or ask your own question.

6
How does precise GeoLocation in HTML5 work?
1
How do I find out the Mac Address Firefox submits for Geolocation?
4
Override geolocation with static one in Opera 10.63
6
How can I set my current location for geolocation APIs to pick up?
2
Is it possible to provide local geolocation data?
3
How to tell Google Geolocation that I moved home and took my Wifi networks with me?