I recently decided to follow the best practice of storing backups at a different site (a safety deposit box). I only backup up my personal data, and the zip files are in the order of 100MB. Multiple backups can fit on a DVD.

Normal DVDs are too big for my safety deposit box, so I'm considering mini-DVDs. I have a 2011 era laptop, and I know that it reads mini-DVDs -- some products I've purchased provide documentation on mini-DVDs, which I was able to read. However, I'm not sure if the drive can write on mini-DVDs (it writes fine on normal DVDs).

It use to be that disc drives had markings on their faces to show what kinds of discs they are compatible with.

The manual can be found at this Toshiba site. Page 2-14 says that the laptop has a "DVD Super Multi drive" (I don't have BD). According to Tom's Hardware, this should be able to "read/write/rewrite CD's, DVD+r, DVD-r, DVD+- r, DVD+-RW, and use Dual layer DVD's". It doesn't say anything about different sizes.

The very next sentence in the manual says 'A Serial ATA interface controller is used for 12cm(4.72") and 8cm(3.15") (Tray ODD) and 12cm(4.72") (Slot ODD) CD/DVD/BD operation.' The crime of not defining the acronym ODD is committed, but I suspect it refers to optical disc drive. As was customary with laptops in the day, my built-in ODD is of the form of a slide-out tray, with a quarter of floor of the tray missing (I'm sure there's a good reason for this, but I haven't yet found it via web search). I assume that this still falls under the "tray" definition.

However, it could very well be that the SATA interface description is merely a description of an internal SATA interface or the external eSATA port. Interpretted literally, that is all that is stated. Further evidence that the passage does not refer to the physical ODD itself is the fact that it refers to possible ODDs rather than a specific ODD. In fact, I find the passage quite confusing, as it describes both an interface, an ODD, and the disc sizes supported by various ODDs. Therefore, I don't see that passage as an reliable attestation that my ODD can write to mini-DVDs.

Mini DVD/CDs are no different than full size ones, they just hold less. All DVD/CD writers can use them. When you open your optical drive tray there are two circles pressed into the tray. One is for the the full size media and the smaller one is for mini-sized media. You can see the circles in the image of the tray below. 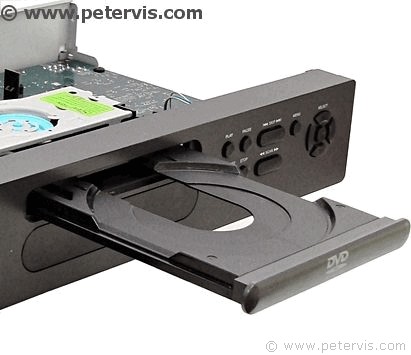 The only difference between regular and 'mini' CDs or DVDs is their size (diameter as well as data capacity) – their structure is otherwise exactly the same. This means that they can also store the same kinds of data.

(For that matter, as far as I know, there's nothing special about camcorder DVDs anyway; they're just video DVDs and those use the same structure as a data DVD – just an UDF filesystem with .vob files. They don't require a different writing mode the way audio CDs do.)

As long as the drive can hold the smaller discs physically (i.e. has a proper tray and isn't a slot-loading drive), and because you've already determined that it can successfully read from them, then it should be able to write to them without problems.

Not the answer you're looking for? Browse other questions tagged backup dvd optical-drive or ask your own question.

1
DVD Drive won't play DVDs, weird context menu
14
Windows won't release lock on drive tray after burning a disc
0
Disc Format Settings for Video DVDs
1
Windows does not recognize DVDs inserted into Blu-ray drive
3
How do I consistently rip my DVDs to ISOs in Windows Vista?
1
Sudden doubts about DVD+R reliability
0
Can I be sure that files copied from a DVD are not corrupted?
1
Disc drive doesn't read DVDs anymore
0
How can I determine which track is played when I select an entry in a DVD menu?