How to wipe unallocated disk space in Windows

Due to the nature of how filesystems like NTFS work, files that are deleted "permanently" from within Windows aren't immediately deleted - they're simply marked as deleted from the Master File Table (the hard drive's index) and therefore inaccessible from within the operating system using normal means.

This means that although a little harder to get to, they still exist on the drive until the space they occupy is overwritten by a newer piece of data, which can be never at all depending on how much free space the hard drive has. This makes deleted data easily recoverable to anyone capable of using dedicated data recovery tools like Recuva and GetDataBack.

On Windows, the wiping of free space is usually done via a (typically bloated) third-party GUI, despite the fact that it can be done relatively simply via the command-line in Linux.

Does such a command-line tool exist for Windows?

Such a tool exists in the form of a native, little-known Windows utility called cipher.

cipher.exe has been included in Windows systems since Windows 2000, with the original purpose of encrypting and decrypting files and folders using EFS encryption.

However, all that's needed to securely wipe the free space on a hard drive is cipher's /w switch:

Note that cipher's syntax is slightly odd in that it requires one colon after the /w switch, followed by the drive letter of the volume that you want to securely wipe. If your system contains both a boot drive and a data drive, you'll want to wipe both separately with cipher /w for maximum security, or wipe just the data drive to cover yourself for most purposes. 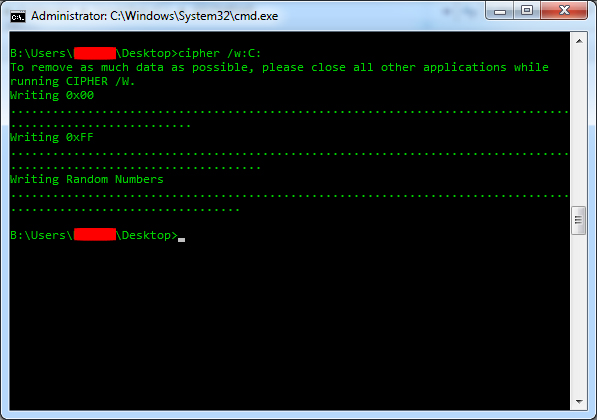 cipher works by creating a folder called EFSTMPWP on the root of the target drive; inside this folder, it successively fills three temporary files with zeroes, ones and random data, one after the other, each one filling the size of the empty space left on the drive. By the time a file has taken up all of the drive's empty space, it's effectively forced the filesystem to overwrite all data held in its free space with the file's newly-written data, rendering any data previously held there permanently irrecoverable.

Not the answer you're looking for? Browse other questions tagged windows hard-drive command-line cmd.exe cipher or ask your own question.

162
How to wipe free disk space in Linux?
23
Where do deleted items go on the hard drive?
0
Why does cipher /w fill up temporary files instead of writing to the raw disk?

10
Why some recovery tools are still able to find deleted files after I purge Recycle Bin, defrag the disk and zero-fill free space?
2
How to reset an NTFS MFT for no tracks of deleted files names to be found there?
0
How to wipe a specific region of a hard drive partition?
0
A program is using up 150MB/s of disk usage
0
How mechanical HDD's determine which files to overwrite when copying data
0
Purpose of hard drive wiper software?
0
Why does cipher /w fill up temporary files instead of writing to the raw disk?
0
What marks data as deleted - the hard drive or the filesystem?
1
How do I delete programs that dont exist according to windows explorer