Why is my EPSON L130 printer printing pages with lines all starting with “@JPL” when I connect it to my new Windows 10 laptop computer?

Every time I turn on my EPSON L130 printer connected to my Windows 10 laptop PC, it prints out a page containing some lines of a code of some kind and it all begins with "@PJL". When I give it a job to print, it again prints the same page with lines of code. Every now and then I get the printout of what is required but I can't find a pattern as to when the correct prints occur. 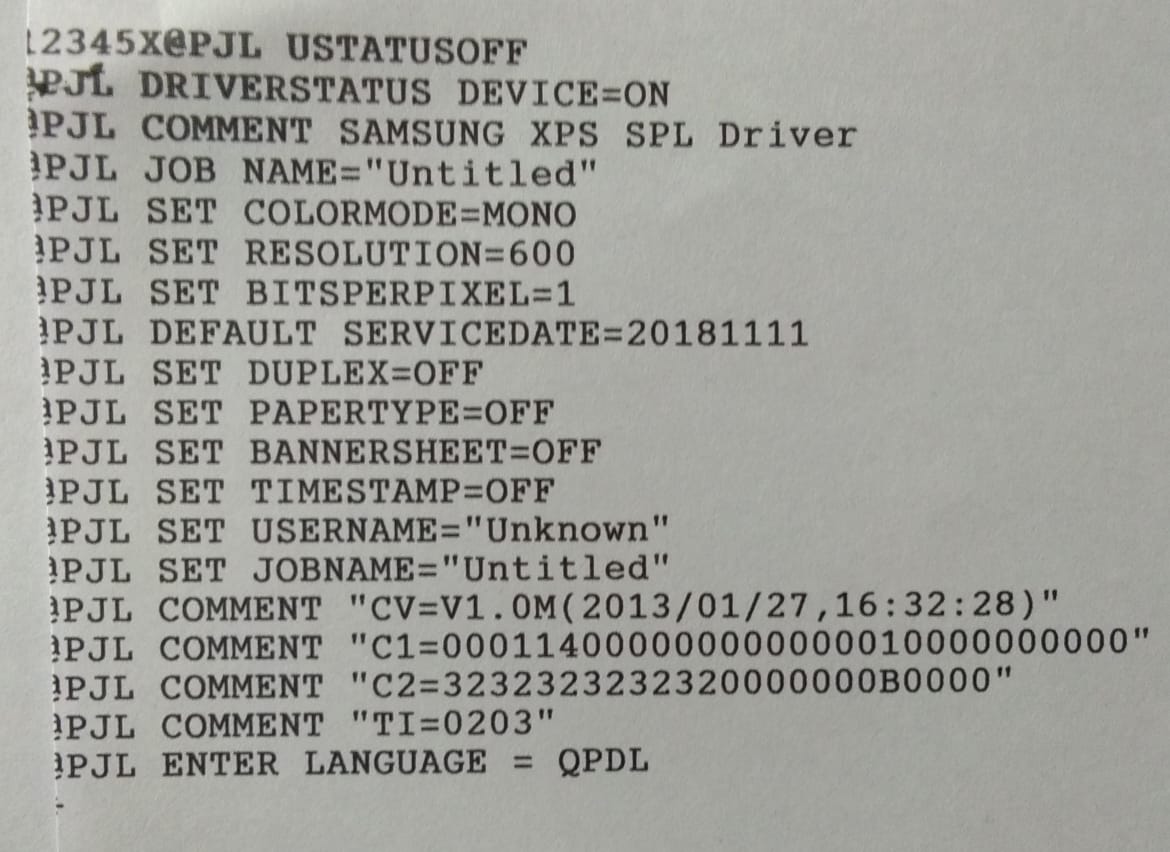 PJL stands for "Printer Job Language". This is a set of commands that are used to set the printer up for specific printing functions, before the actual job is sent. Examples are duplexing, stapling, etc. The PJL commands are added to the beginning of the job by the driver.

I have not been able to find out what languages (if any) your printer understands. Neither the data sheet nor the manual mention it, which makes me think your printer is host-based.

However, the fact that it prints the PJL commands implies that you are not using the correct driver. Try re-installing the printer. Go to Devices and Printers. First delete the printer. The click on any other printer and select Print Server Properties from the menu that appears at the top. Click The Drivers tab and remove any instances of your printer. Now install from CD or from a downloaded driver. Click the Download button on that page.

Note that the link @harrymc gave is not an Epson Support link, although that driver may well be the same.

It seems like your Epson driver is set to print JPEG images rather than Postscript. You could search the driver configuration page for such an option. This page is reachable from various places, including the File menu of your displayed print queue (I don't really remember where, maybe also from Device Manager, Properties of printer).

If you can't find anything, try to download and install the driver from the Epson L130 Driver page. Get the 32-bit or 64-bit version that matches your Windows version.

Not the answer you're looking for? Browse other questions tagged windows-10 printer or ask your own question.

0
HP Printer odd behaviour in Vista Home Basic (further information)
0
Can't install shared printer on Windows 7
1
Windows printing: printer works locally, but over network it can't find driver
5
Why does my printer stop printing after a few lines and then eject the paper?
0
Cups line printer skip page after printing one line
0
How many pages can be printed continuously on HP LaserJet 1020 - 1020 Plus Single Function Laser Printer at 40 degree celsius
0
Unable to print on network printer from WIFI connected device
0
How to disable restart print job which goes to error state?