Windows 10: generate a display with the laptop lid closed

Is there a way to make Windows 10 (Home edition with all current updates installed) generate a display on a laptop computer with the lid closed and the following settings?

Control Panel > Power Options > When I close the lid > Do nothing

In this thread concerning remotely controlled laptops with the lids closed, the techie answers that

To fix this, you would need a way to make the remote side generate a display with the lid closed. Even an external monitor or dummy plug would work.

Now an external monitor is out of the question in my case due to space considerations, but could someone please elaborate on what exactly is meant by a "dummy plug" in this context? Would that be a wireless display adapter or could something less expensive be used?

According to the link, this problem arose after a Windows update, but it's not clear whether this is solely a Windows 10 problem or not. Does anyone know? And, more importantly, does anybody out there have a software fix for this or any other suggestions?

So I ended up using an older laptop with an earlier Windows version (7.1) running on it instead, and it works flawlessly for the task at hand. Moreover, I can confirm this is in fact a relatively recent Windows 10 problem. I didn't try harrymc's suggestion below, but his is a relatively inexpensive solution that should work in theory, if you don't have a laptop not running on Windows 10 at your disposal. As far as I can tell, no readily available software fix currently exists for Windows 10 for this particular problem.

A video dummy plug is something that emulates a monitor connection, like this one: 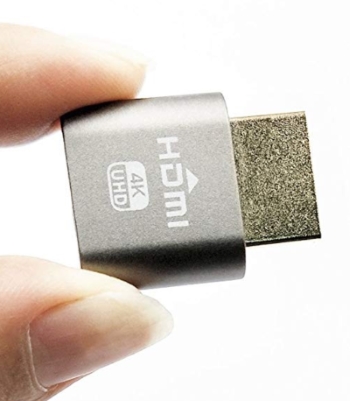 If that does not help, please explain your problem in more detail.

Solution for issues with screen being not refreshed properly when laptop's lid is closed, involves exchanging "ACPI lid" driver with something else:

Please note that starting from some specific version of Windows 10, the Volume Manager is now filed under 'Microsoft' manufacturer name, and not inside '(Standard system devices)' where it used to be.

Please also note that you will lose the ability to define an action like hibernation/sleep on closing the lid (relevant drop-down list will just disappear from Power Options Control Panel applet).

I suspect that each year with major Win'10 update you will probably have to repeat there steps as Windows will likely redetect ACPI Lid.

I guess that it is just a matter of changing the driver to anything else that won't BSOD, not necessarily Volume Manager, or maybe disabling the 'ACPI Lid' driver will suffice, but I've did just what the instruction said.
This solution is either underrepresented here on SuperUser, or completely absent, since - after reading several questions - I was about to buy not less than 12 HDMI dummy plugs (honestly, I needed just a half of that, but didn't tested then), which is not an ideal solution (something sticks out from the laptop, costs money and is not strictly necessary, as the issue is just a software thing). I've also considered some virtual monitor software, but found none.
This allowed me to 'fix' 5 out of 8 Win'10 laptops, that used to cease refreshing image on the screen with lid closed (three others were not affected, as well as two with Windows 7 and two with Windows 8.1).
Strange thing is that there's no rule as for my 8 laptops. Older machines upgraded to Win'10 (one with forced ATI Radeon x1270 driver, that Win'10 insists on uninstalling with major update each year, another one with ATI Radeon HD 3400 - each has got a VGA out AFAIR) don't exhibit such a behavior. Newish machines from Win'10 era generally do exhibit such a behavior (one HP 15-RA0XX, three Lenovo Ideapads 110-15IBR 80T7, one Acer Aspire A515-52G), but Lenovo v110-15ISK that is somewhere in-between those older Lenovos and HP, judging by BIOS date, is not affected whatsoever. It ain't also a matter of discrete vs. integrated GPU, as all of those Win'10 era machines - but the Acer - got integrated Intel GPUs.
On one of the older laptops (Gateway M-1631U, the one with forced ATI Radeon x1270 driver) I could even add second fake display, though with only 1024x768 resolution - and in spite of correctly updating the screen with lid closed, I don't need that anyway.) On another older laptop (Toshiba Satellite A300 - the one with ATI Radeon HD 3400) I couldn't, but on this one I don't have to as it also works fine with lid closed.

I've just come across this problem after Win10 20H2 update (actually, I held the affected laptop back on v1909, as the same problem occurred on 2004 update and I couldn't be bothered to fix it, until other updates wouldn't install). The laptop concerned is a Lenovo L440 (more Ham Radio), and I resolved it slightly differently, by forcing Windows to use the Microsoft Basic Display Adaptor, rather that the Intel HD Graphics 4600 driver that windows wants to use (device manager is also happy then)

I belong to a volunteer ham radio group which uses laptops running win10 to run remote radio equipment. Right now we have limited physical access to the equipment so a remote fix is the only solution for us. I have fixed 4 machines with this problem by doing the following: using Teamviewer use the windowkey+P Return recommended by others. After a couple tries, this gives a window access. Then use the TeamView options, advanced, change driver fix also recommended by others. NOW, in windows, settings, personalization, make sure the background is set to solid and the color check mark IS on a blue color. I found it on black on all but 1 laptop. Leave Team View, then return and hope you have a normal view. This has worked on all 4 of our remote machines and some have had this fix installed for over a month. I have no idea what any win10 update will do to it. If you are using Anydesk, you know that there is no joy until you fix this black screen problem. I used the Teamview access process to make the screen appear normal. Anydesk is now happy also.

We are working on preparing new laptops for these sites when we eventually get access. We are intending to also add HDMI ghost monitor plugs as extra insurance. Belts and suspenders.

Not the answer you're looking for? Browse other questions tagged windows-10 laptop power-management remote-control or ask your own question.

1
External Monitor display issue when closing the lid of laptop
11
Secondary monitor shuts off when laptop lid close
0
Remove closed laptop screen from Windows desktop
27
Disable laptop screen when lid is closed
1
Windows 10 - close laptop lid
0
Windows 10 places login screen on my closed laptop lid at boot time
0
Can I connect laptop to external screen with lid closed
50
Is it wrong to use a laptop with the lid closed?