I really want This PC to be the first element in my navigation pane, after Quick access, but things like OneDrive and Dropbox give themselves higher priority: 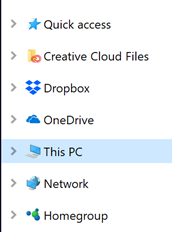 How can I reorder or remove specific entries?

I have only found the Navigation Pane to be configurable directly in the Windows Registry.

3rd-party entries are under the path \HKEY_USERS\[*SID*]_Classes\CLSID\[*ApplicationHash*]. If you're the only user logged on, your SID (or Security Identifier) will be obvious because there will only be one. It is the long one. Entries only exist for users currently logged in, otherwise you can determine your SID by using the Command Prompt statement wmic useraccount get name,sid.

Entries can be found by searching for the name that shows in the Navigation Pane. The ones listed in the question are as follows:

Note that different people may have a varying value for the last 12-digit segment in the path.

Entries are configured using the two values System.IsPinnedToNameSpaceTree (boolean) and SortOrderIndex (integer) which control visibility and the order ranking, respectively:

Reorder the entries by updating all the SortOrderIndex values (ignoring those you disable, of course), with new values such that sorting those smallest to largest would be in the same order you want the Navigation Pane entries3.

For example, to reorder such that This PC comes before DropBox and then OneDrive, you could set SortOrder of DropBox to 998 and OneDrive to 999.

Once you have specified your configuration, force restart Windows Explorer to effect the update by killing it with Task Manager (open directly with Ctrl+Shift+Esc) and re-launching from there (File > Run new task > explorer.exe).

Quick Access can be removed by adding a new REG_DWORD HubMode with value 1 to the path HKEY_LOCAL_MACHINE\SOFTWARE\Microsoft\Windows\CurrentVersion\Explorer. More info.

So to fix this problem I used WinAero (free software).
After opening it, look for

Uncheck / check some items and they will appear in that specific order.

Not the answer you're looking for? Browse other questions tagged windows-10 windows-explorer or ask your own question.