What is the easiest way to disable the touch pad on a laptop?

What is the easiest way to disable the touch pad on a laptop?

I have a laptop which lacks a means to turn off the touchpad with a simple Function key sequence. I would like to disable the touchpad so that it stops detecting movement when I am typing. This is quite an annoyance as it sometimes results in deletions of sections of a sentence I am typing. Right now I have a thick piece of paper over the top to decrease the sensitivity.

Any other suggestions on how to do this?

Original post isn't real clear on if you need something that can be quickly turned back on or not. Typically, the connector from the touchpad to the mobo is easily reached under the keyboard. You could unplug it as long as you don't need to be able to turn it on/off on the fly (and you're not worried about warranty/possible accidental damage concerns). Obviously, don't do this unless you're quite certain of what you're doing, etc. Poking/proding the wrong thing could cause permanent damage. Insert additional disclaimers here, etc.

The simplest is often the best method. All (almost) windows-based laptops have touchpad / touchstyk running on drivers that are based on synaptics. These are easily accessible from : 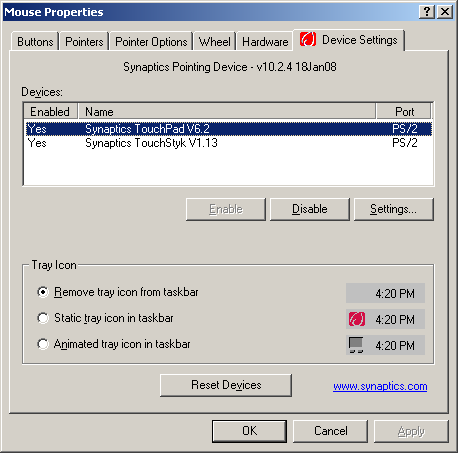 Here you can Disable the touchpad.

But if you can't do it that way you could always disable it using the device manager found under "My Computer"->Preferences and it's on one of the tabs found there.

I don't know precisely what the tab/menu says because I have a Swedish version of windows.

I've not tried this myself, but you could try using the DevCon utility, which is kind of like Device Manager for the command line. You could, therefore, use it to write a couple of batch scripts to enable/disable your touchpad device. You could then bind these scripts to a couple of hotkey combos using Autohotkey or the like. Like I say, I've not tried this, though, so I'm not sure if it will work.

I found the following tutorial for using Devcon to enable/disable a wireless card, which is very similar to what you're trying to do.

It might be worth a close inspection of the funny extra key combinations that most laptops have, often mapped onto normal keys along with a special shift key. My netbook has a touchpad, and the combination Fn+F3 toggles it on and off which is quite handy. Most of its F keys have an extra function accessed with the Fn key. My only real complaint is that Fn shares real estate with the left-shift key which is narrower than I'd like as a result.

I've seen similar features on other laptops. In one case, the touch pad was controlled by a non-obvious button along the top edge of the pad.

It'd be a shame to unplug it if such a feature is already there... Of course, it is also likely that the maker didn't think that feature would be important... but I personally would disable the pad with extreme prejudice if it didn't have a soft key to turn it off!

Often the manufacturer will have custom software that does this.

On Linux, just install syndaemon and run it when your session starts. I suggest you use the -k and -t options

If you were using a Mac you can turn off the trackpad when an external mouse is plugged in by by using the Keyboard & Mouse Preference Pane in System Preferences (< 10.5.6), or the Trackpad Preference Pane (10.5.7+).

I disabled the ability of the touchpad to do mouse clicks. Even when I might touch the touchpad accidently it will only move the mouse curser with isn't any problem while typing.

Try http://tpp.desofto.com/. This disables the touchpad during typing. 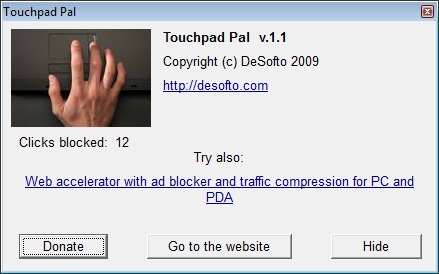 Not the answer you're looking for? Browse other questions tagged laptop touchpad or ask your own question.

1
Need help disabling my touchpad
1
How to disable the touchpad in Windows 7 while typing?
0
Quickly turning off and turning on a notebook touchpad