Generally speaking, assuming all the data to be compressed is of the same type and the compression algorithm used is the same (and that I also don't care about the time it would take to decompress the larger file), will either method result in better compression than another, or will the total sizes of the compressed files in the two scenarios tend to be equal?

Only if the archive is using solid compression. A non-solid archive (like a Zip archive) compresses files individually. This enables you to easily decompress single files from the archive. It also allows you to add files to the archive without having to recompress everything.

With solid archives, all this is a lot harder: To decompress a file at the very end of the stream, everything has to be decompressed (though not necessarily written to disk). When adding a file, the algorithm also needs to go through everything.

There is a middle ground, however: Using “solid blocks”. Now the archiver doesn’t have to process the entire file all the time but only some of the file. 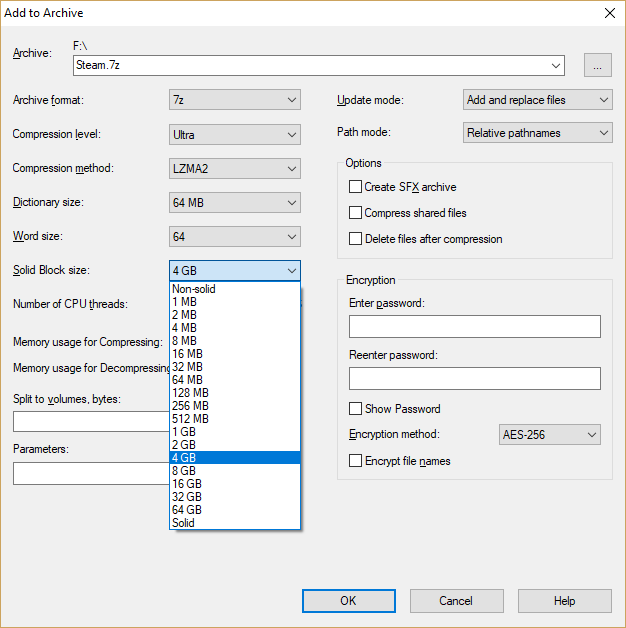 Without taking into account the data being compressed, it’s really simple:

Depending on the predicted access pattern, you should select a suitable variant.

While it is impossible to say with absolute certainty, one larger archive theoretically should result in a smaller archive size, as more blocks of data can be found as repetitive. This is assuming the data is as homogenized as you say.

However, it is entirely possible that certain folders contain files that have more similar blocks of data and therefore, might compress better as its own individual archive.

The only true way to know which method is best would be to test both ways.

The single archive will almost always be smaller, though not for the reason you think.

Put simply, by having only one archive, you don't waste space with multiple archive file headers. There's some minimal amount of space an archive file takes up just to be a valid archive, and you end up taking up that much space with each archive you create. The only widely used exception to this is the cpio format, which has no header for the archive itself, but instead just has per-file headers.

More realistically, you will usually get at least as good of a compression ratio using just one archive instead of more than one, and with some archivers it can be significantly better (for example, zpaq does deduplication within the archive, so it can save a lot of space if there's lots of duplicated data).

There's another question you need to ask before you decide on this though: Is the overhead of having to handle a single large archive instead of multiple smaller ones worth the space savings? Depending on where you're storing the data, it may be more economical to just use the smaller archives, especially if you're likely to only need one of the folders at a time.

Overall though, Keltari is correct, the only way to know for sure is to test it.

Not the answer you're looking for? Browse other questions tagged windows compression 7-zip archiving or ask your own question.

3
Should I compress hard drives containing large video files?
0
zip sub folders individually
8
How can I specify the order files should be compressed in 7zip?
2
Does specifying the compression engine to tar directly actually use less intermediate disk space than tarring first and then compressing?
1
How to compress a bunch of files efficiently?
0
Powershell script to compress all child directories and move to archive; keep file structure. Delete originals
1
Do 7z archives compress each file individually or compress everything together as one?
33
7-Zip seems unable to compress zero-filled virtual disk image after 1.8 GB