Ok so this is a weird one. I'm used to troubleshooting things like this one myself, but now i'm rather stuck.

Just bought a new PC with RTX 2080 & Ryzen 7 2700X. All good, runs smooth and rather cool. While gaming i have heard a weird buzzing noise coming from my PC. I tried to locate the sound and it seems that it might be coming from the PSU (all components are new).

Here comes the weird part: I tried reproducing it instead of having it show up randomly by stress testing my CPU and GPU at the same time. I figured if its a PSU problem while gaming then it should show up while stress testing (especially since no game has challenged my CPU & GPU at the same time so far). Ran it for about 10-15 minutes. No buzzing.

The noise can also be heard very briefly (and at a lower volume so to speak) randomly. Last night i was watching a movie, it heard a low buzz and its not the first time. Now i'm in a game (ATLAS) and SOMETIMES it starts buzzing.

Any tips on how i could troubleshoot this ? All temps are fine, no PC freeze, no BSOD, no errors at all of any kind, yet the buzzing sound is there.

I must add that i just bought a UPS because i needed it and i also thought it might be because of my houses electricity "bouncing" (not very good at electrical stuff). Nothing changed.

I also managed to record it here -> https://www.youtube.com/watch?v=u7O7np_p6fU

You can also hear the fans, but the sound cant be missed (also a bit louder since i was recording near the source).

P.S: Not sure if the hardware-failure tag is fine since nothing failed so far, but i'm unsure what to use.

Edit: Forgot to mention, i checked task manager while in-game when it started buzzing. Nothing was even near 100% and my HDD was at 1% (the one the game is on). 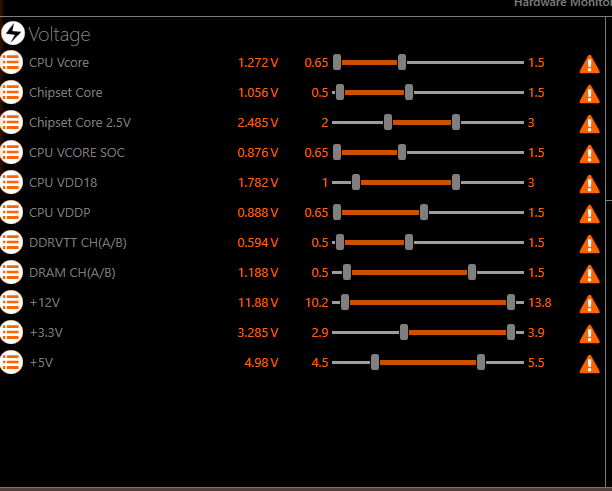 Edit: Finally found the source of the buzzing! Its the GPU, but its not a fan. I think its the GPU case that is buzzing. After 3 days i managed to get the buzzing while my case panel was off. I tried slowing down one of the fans, the buzzing stopped while my finger was slowing the fan. Then i tried another fan, same thing. And then FINALLY i simply touched the plastic case on my GPU and the same outcome -> buzzing stopped.

From this i assume my GPU case is actually buzzing due to FAN vibrations ? My card doesnt seem to be 100% in place in the PCI slot (its rather big), but i dont think that has anything to do with it (its a not a perfect line so to speak). Any tips on how to fix the buzzing now ? I'm attaching a picture of my GPU for ref. 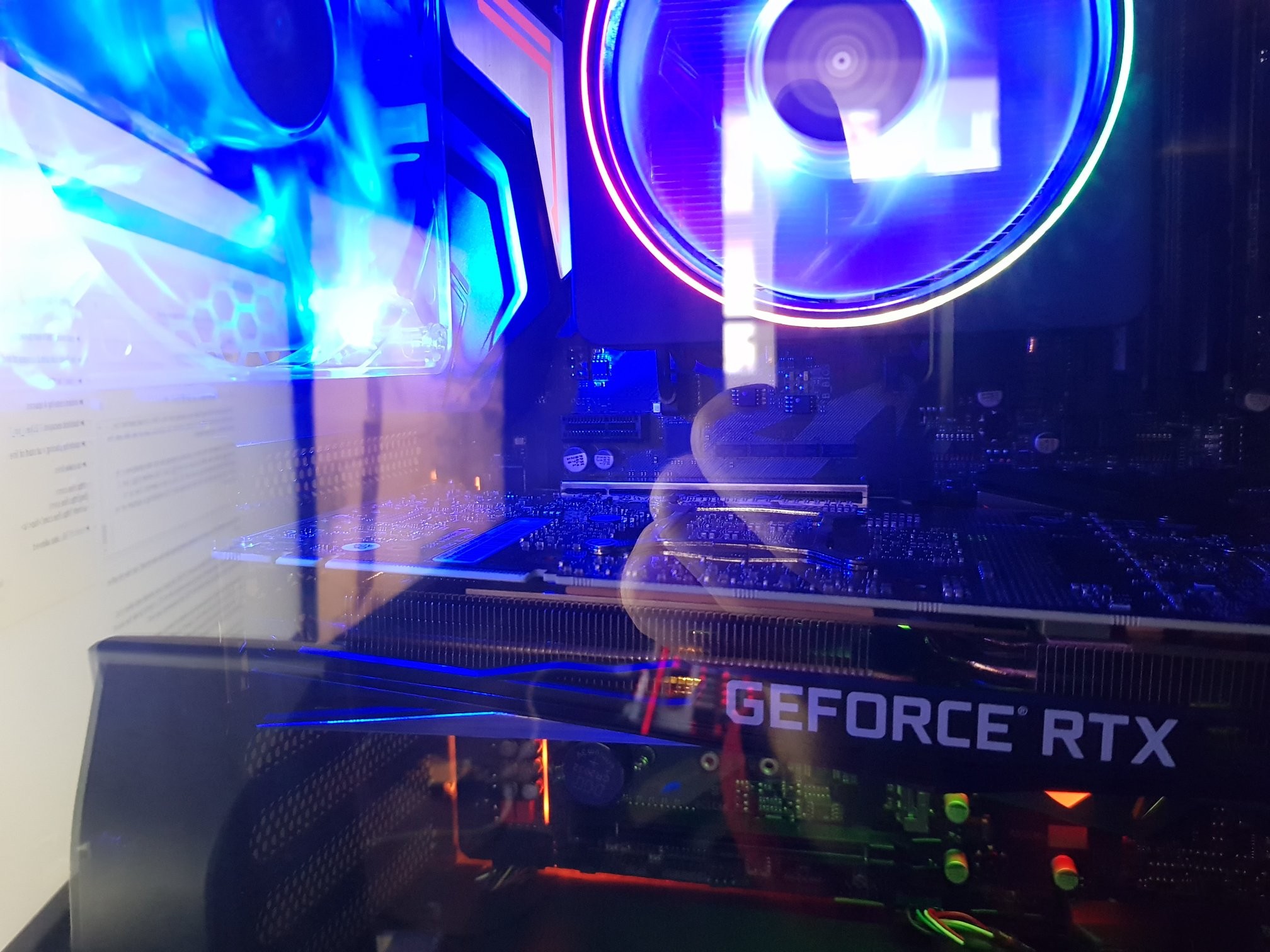 You can see that its not perfectly aligned if you look at the MB port. By touching the case and it stopped i mean the grey case part on the GPU that you can see in the pic (bottom of GPU).

I would recommend figuring out what is making the buzzing sound for starters. The most likely cause for buzzing would be the fans but as you've said, you don't think that is the case.

If the sound relates to electrical buzzing, the likely source is the Power Supply (PSU) coils. I currently have a similar intermittent problem involving coil whine which is however more whine than buzz. Where coil whine tends to be higher in pitch than what you're describing hence I don't think that's what you have.

There is a chance that something is shorting (and therefore arcing) somewhere in your computer. If you see any sparks, the part should be sent with great haste for repair or simply binned.

Having just listened to the recording, this does not sound like anything electrical, nor does it sound like coil whine. If my ears are not mistaken, that is a fan. There could be a piece of plastic in a fan somewhere, something like a zip tie perhaps? Since it's intermittent, the offending fan may be on a temperature switch (it turns on when it gets too hot). Your main hardware is very good so it's unlikely to be that, I would check motherboard fans or other little fans that can be dotted around various components. The PSU fan is the likeliest cause.

Look for things caught in the fan blades, or at the edges of the blades. If that turns up empty, and the card is under warranty, I would return it. If the card is no longer under warranty and you have the technical know how, you can attempt to locate the problem yourself by pulling apart the card. One of the fans themselves may be buzzing in which case you could try to replace it or just unplug it.

By the looks of it, your card is sagging in it's slot a great deal. This is likely what's causing the problem. For starters, you can try lying the case on it's back (such that the motherboard is facing up) which would decrease the strain on the GPU case. If this works to stop the buzzing, you are going to need to find a way to support the gpu. These usually do the trick: AMAZON

Just to remark that the RTX 2080 is a noisy card. It can also be the PSU, but you should be able to distinguish between the two by opening the case and listening closely.

You can hear very similar noise on YouTube in the following:

I believe that the noise is not the fans, but rather Coil Whine:

Coil whine, also known as electromagnetically excited acoustic noise and vibration or audible magnetic noise, is one of the most frustrating phenomena in modern technology. As its name suggests, this high-pitched noise is caused by electromagnetic coils that act as inductors or transformers. Though it can come from many components, coil whine is usually found in video cards. High-end graphics cards are used to run intensive software or demanding games, which can cause them to work very hard and vibrate. Every PC component has a resonant frequency when coupled with the rest of the electrical circuit. Noise can also occur when the coil is poorly secured to the circuit board. Unfortunately, there is little you can do to reverse or remove coil whine once you have it.

This can explain why the noise is random and bears only a feint relationship to the GPU workload, if you hit the resonance only under special conditions and load.

If the problem is indeed Coil Whine from your video card, then your only options are:

See also Tom's Hardware review of noise levels of the RTX 2080 in a closed case. The average noise level was about 40 dB(A), which I saw being compared to urban bird calls in volume.

Easy answer would be: You need to do something that stops it from vibrating.

Maybe something that could serve as a support "column" from underneath and up that could align it perfectly.

I had a problem with more of a thudding noise coming from my power supply, it turned out to be cords from my graphics card hanging down, make sure to check and make sure the fan is clear

Not the answer you're looking for? Browse other questions tagged power-supply hardware-failure or ask your own question.