Is it possible to open a SQLite database from within Microsoft SQL Server Management Studio?

Is there a way to open a .db file (SQLite database file) from within Microsoft SQL Server Management Studio?

Right now we have a process that will grab the data from a Microsoft SQL Server database and put it into a SQLite database file that will be used by an application later on.

Is there a way to open the SQLite database file so that it can be compared to the data inside the SQL Server database... using only one SQL query?

Is there a plug-in for microsoft sql management studio? Or maybe there is another way to do this same task using only one query.

Right now we have to write two scripts... one for sql server database and one for sqlite database ... then take the output from each in the same format and put them each in their own OpenOffice spreadsheet file. Finally, we compare the two files to see if there are any differences. Perhaps there's a better way to do this.

Edit: The table columns and layouts are different so using the combo of http://www.codeproject.com/KB/database/convsqlservertosqlite.aspx and http://www.sqlitecompare.com/ will not work here.

P.S. A lot of applications use SQLite internally: Well-Known Users Of SQLite

Hi Yes it is possible to open any sql server from within management studio when you have the correct odbc driver to do so. Create an ODBC connection to the *.db3 file and call it something like SQLite then try this is a query window

-- needs to be a system odbc connection not user

This is how you get the data, you can create views using this sql as well if you like

The OP is asking for a way to query between DBs and so I understand the linked server responses. However, if you're here because you simply want to open an SQLite db with MSSMS, it's a lot easier than that.

Call me lazy, but all of these answers are kind of laborious and/or require things you may not want to do, have access to do in every case, or are just the wrong thing to do if all you are looking for is something better than DB Browser For SQLite such as MSSMS. 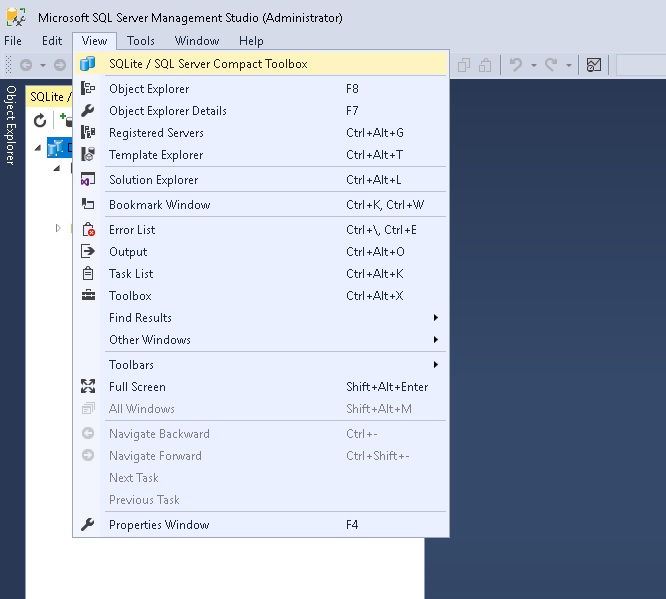 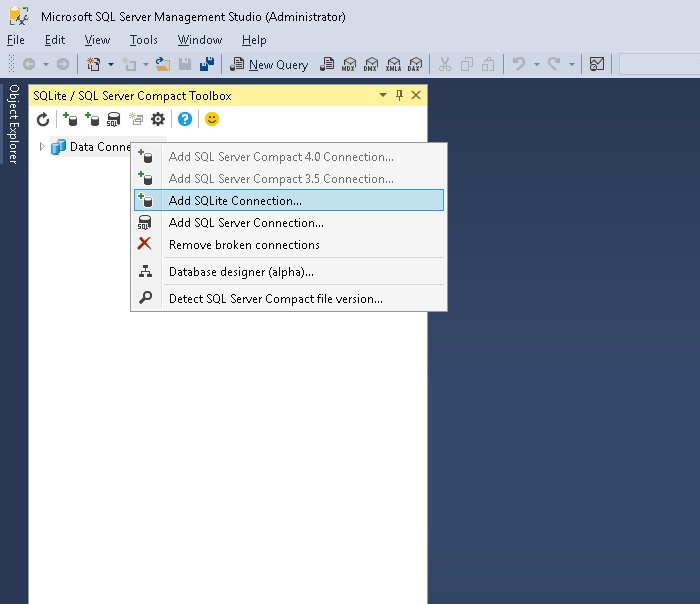 Browse to the file 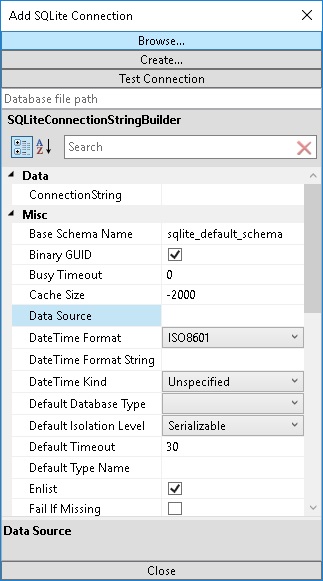 You may want to create a linked server, if you have a provider for SQLite that SQL Server will accept.

Connect to your database and then navigate through "Server Objects", "Linked Servers" and add a new linked server. You can then use SQL Server to query the SQLite database, and compare the results directly.

Here is a tutorial for MySQL, so if you can create an ODBC connection for SQLite then you will be good to go.

If you cannot install a System DNS, then the following steps should work:

You should now be able to query the SQLite DB with

It IS possible to open another type of database in Management Studio. I opened an Informix database, using a linked server to the Informix server.

Not the answer you're looking for? Browse other questions tagged comparison sql-server-2008 sql sql-management-studio sqlite or ask your own question.