I have a laptop with native screen resolution as 2560*1440. So that means it has 2560 pixels dot horizontally and 1440 pixel dots vertically.

I can also force the system to display as a screen with resolution as 1280*720 (which is basically 1/4th of the pixels when compared to 2560*1440). which forces the system to use 4 native pixels to display 1 pixel of the picture.

Similar effect when i keep the screen resolution at 2560*1440 and zoom of 200%. ie, to display every pixel of the picture, screen uses its 4 native pixels.

Still i see difference in the screen clarity between the two settings. Please see below for the screen shot of the two-

Can somebody explain the reason for this difference in clarity?

It looks like you are referring to "zoom 200%" in some OS settings.

When you use 1280*720 everything is rendered in this resolution and then scaled up as a bitmap (by your monitor). The final image indeed consists of 2x2 pixel blocks.

When you use 2560*1440 resolution with zoom of 200% then every object is scaled up first, then rendered in the full resolution. With a bitmap it may not make a difference but objects like TrueType fonts or vector graphics scale "smoothly", they can alter every available pixel separately. In effect the resulting image doesn't necessarily form 2x2 pixel blocks on your screen as in the first case. 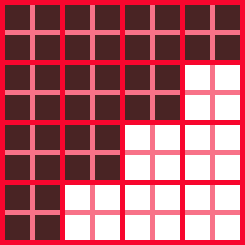 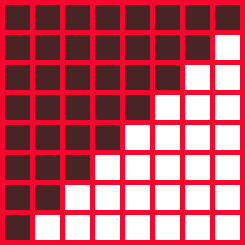 Note if we only had the original 4x4 triangle as a bitmap, the final result would be like the left one above, regardless if the scaling was done by the OS or the monitor. Mathematical description of the triangle allowed the OS to recalculate it to new dimensions and get the smooth image at the end.

In modern operating systems many GUI elements, fonts etc. are available as "mathematical descriptions" that may be recalculated smoothly to given dimensions (zoomed). The general term is vector graphics.

In addition to Kamil's excellent answer (graphics and text will be drawn at the improved resolution and therefore look better), MacOS and iOS actually allow the developer to use different artwork depending on the screen resolution. On a zoomed display, you may use artwork with additional details that wouldn't be readable on a lower quality display, and use artwork with fewer details for lower quality screens.

Your first image has 2511x1151 pixels. The fonts are clearly rendered to the full resolution rather than half-resolution, so your "200% zoom" concerns just the rendering scale rather than its contents (unless, of course, the content is only available as a bitmap in the original resolution). Your image is better than you expected it.

Now assuming that we scale up prerendered content (I can do this on my desktop using ALT-scroll rather than CTRL-scroll but don't know how prevalent that may be on desktops other than XFCE), you might encounter the opposite situation: that prerendered content looks worse than at original scale.

In that case, you might be seeing the effects of subpixel rendering. In a nutshell, red, green, and blue subpixels are on slightly different locations and subpixel rendering incorporates this information for rendering shapes that are slightly better than those rendered without that knowledge. Of course, when scaling up or printing or viewing on a screen with different color specifics, the subpixel relation of the rendering intent is no longer valid and the results may look worse than what you'd want to.

In a way, this is a variant of the "blocky" look when rendering on a device with more exactly rectangular pixels than what the intended display device was.

Not the answer you're looking for? Browse other questions tagged display images resolution pixels or ask your own question.

12
Few questions regarding screen resolution
4
is there any relation between dpi setting and display resolution?
3
Cannot set Max Screen Resolution of 2560x1440 with DELL U2711 Monitor
0
Resolution scaling reduces quality
4
4k Monitor. Higher PPI than iMac 27". More Pixelated than iMac
0
Figure out monitor resolution and window sizing
0
my new SAMSUNG S27D850T monitor DVI resolution is only 2048 x 1152
1
Purchasing a larger display with the same resolution, concerned about screen space and benefits
0
Is there a point where increase in resolution makes no difference due to physical screen size?
1
Asus Zenscreen Display Resolution Configuration (macOS SwitchResX)