Why the different arc length sector have the same size data capacity?

The sector-A and sector-B, the arc length are different, but they representing data capacity are same, such as 512KB. 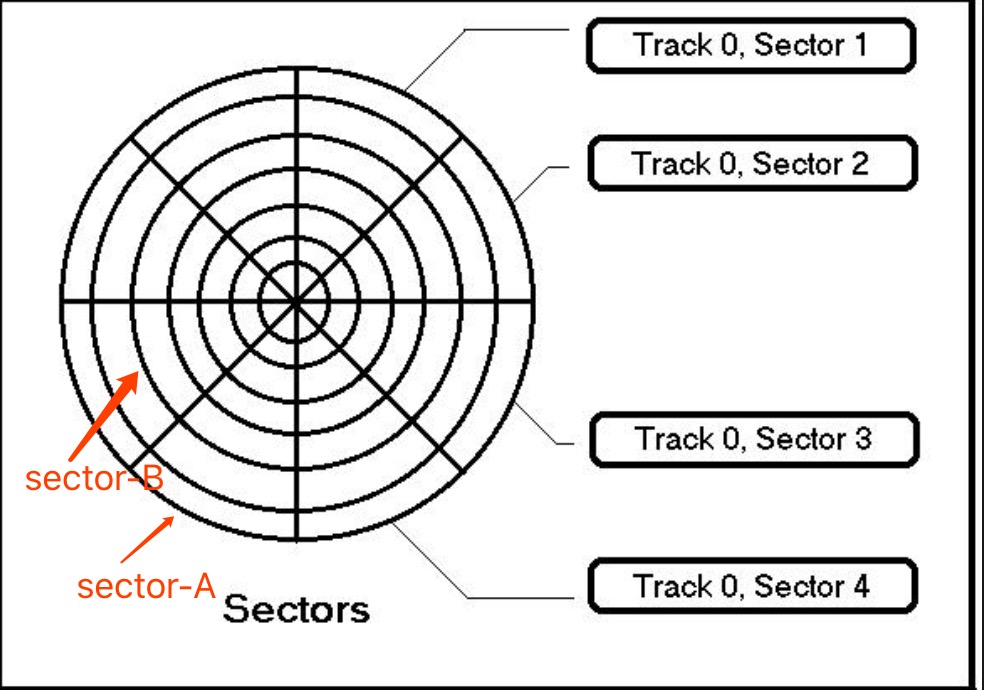 you see, whether the different cylinder sector's density is different? and if we make the disk more large, we waste more materials?

The sector-A and sector-B, the arc length are different, but they representing data capacity are same,

True, because the angular speed is constant, whereas the linear speed it not constant as the cylinder changes.
This is old technology that provided a consistent disk layout to the host device (aka CHS (cylinder, head, sector) for disk geometry), and was implementable with available technology and economic parameters.

Umm no, disk sectors are never that large.
Such a sector size exceeds the raw number of bytes per track of older HDDs.
The ECC (error correction code) would not be reliable with such a large sector size.
The IBM PC/XT established the 512 byte sector as a de-facto standard.

you see, whether the different cylinder sector's density is different?

No, there is a fixed number of sectors per track, so the "sector density" is constant.

and if we make the disk more large, we waste more materials?

No, there is no "wasted material" just because the bit density is variable.

You seem to be unaware that modern disk drives employ zone bit recording, which has a variable number of sectors per track and aims for a consistent bit density for all cylinders.
Zone bit recording only became feasible after the disk controller was integrated with the disk drive, i.e. the IDE drive, and a LBA (logical block address) could be used as an abstraction to conceal the variable disk geometry.

With a modern disk drive employing zone bit recording, the disk geometry is essentially unknown (other than the number of R/W heads). Old techniques such as cylinder alignment of partitions and seek optimizations have dubious value with modern HDDs.

To the extent it may represent a 512 block as traversing different lengths dont think that this image is correct (or at least not correct for non-ancient drives) - indeed im fairly certain that the outer tracks of drives hold more data Then the inner ones. +I wonder if it was true of the very early drives though)

Its well known that the first (outermost) part of the disk is a lot faster then the innermost part. You can verify this by doing a copy/read of a disk - ie block device - and watching the speeds (ive done this often using ddrescue). The speed typically slows down by half. As disks typically have a fixed rotation speed (7200 rpm for example) it stands to reason the outer tracks have more data.

This same line of reaoning is used in the well-established enterprised practice of "short stroking" disks to increase performance at the cost if wasting disk space (google it!)

Of-course all this is becoming less relevant woth the move to SSDs.

Not the answer you're looking for? Browse other questions tagged hard-drive sectors or ask your own question.