Can't delete a file on windows

Edit: Now, the situation seems to have fixed itself - I checked again - and the file is just gone. I removed the parent folder without any problems. I did literally nothing. I have no idea what is going on here.

I have no idea what happened with permissions to my file. I created a file using VSCode in a git repository. Then, as far as I remember, I decided that it's of no use and decided to delete it using git that is installed under ubuntu using Windows Subsystem Linux with git reset --hard. Instead I got an error that access was denied. Now I have a file that, apparently, can survive anything. Trying to remove it gives me an error that I need a permission: 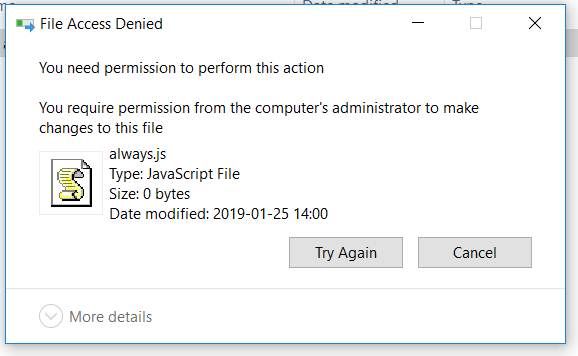 Trying to remove it from ubuntu makes it even funnier:

So I tried to change permissions to the file: 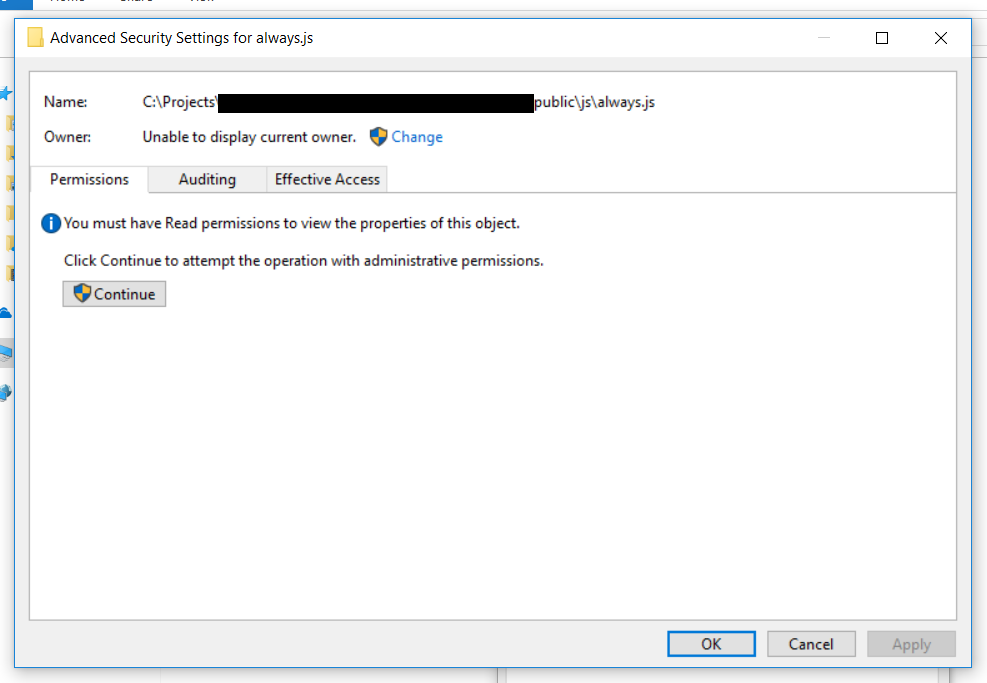 Clicking Continue yelds literally no effect. Trying to change permissions to a containing folder complains that access was denied: 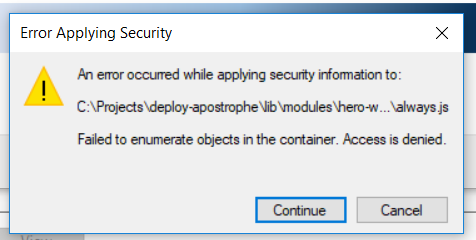 And trying to remove the parent folder says that I need permissions from... myself: 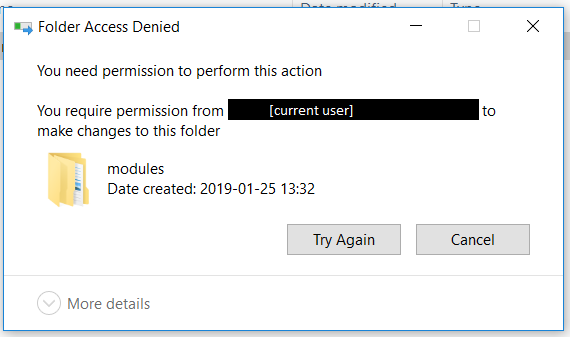 Do you have any idea what can I do to get rid of it? At some point I managed to remove a whole project folder. Cool. Then I cloned the repo again in the same place... and the file was there, marked as untracked by git (because I never added it to the repo). I'm lost.

You likely need to take ownership of the file - current ownership is probably SYSTEM or something, which you need to change to your user (andministrator) account.

Bring up the file Properties box, then the security tab, then click the "Advanced" linkbutton. That window will tell you who the current owner is, and there is another linkbutton there to change this. (You can see this linkbutton in your screenshot above)

Not the answer you're looking for? Browse other questions tagged windows-10 file-permissions windows-subsystem-for-linux or ask your own question.

3
Windows Server 2008 R2 Unable to copy file to shared folder
1
Permission: Deny Delete - How to get to Work
1
Tried to delete symbolic link on WSL from Explorer, now cannot delete
1
$WINDOWS.~BT corrupted after failed W10 update, can't delete
0
Not able to delete file without permission from Nonexistant user/directory
0
How to permanently delete a git repo which is cloned from git-bash?
0
How can I delete a Win10 folder whose permissions have been removed?
0
Installed git for windows, it broke my computer (gave me BSOD), now I can't uninstall it
2
Cannot remove file that I am the owner of