How to query macOS DNS resolver from Terminal?

I know how to query DNS using tools like dig, host, etc. But their macOS man pages state:

The results of DNS queries may also differ from queries that use the macOS DNS routing library.

Given that, how do I query DNS in terminal and get the same results as native macOS apps?

When testing DNS changes I sometimes see different results between the unix tools and native mac applications. Here is an example of what I've encountered: 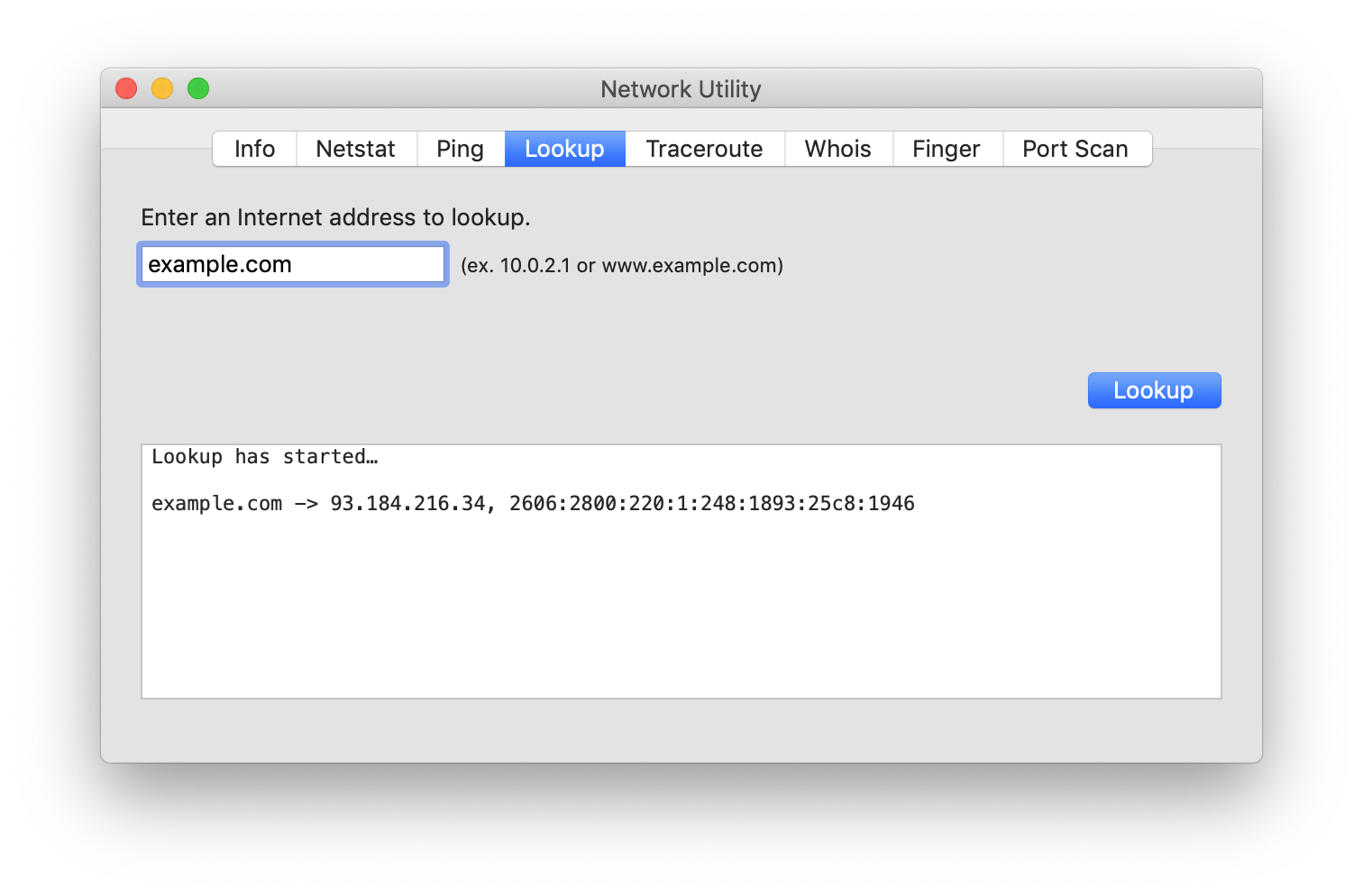 using the macOS network reachability tool, I get a cached result as well (for those not familiar with the output the IP address is revealed in the last line):

Is there a macOS command line utility to resolve addresses using the same heuristic that native mac apps use? Note: I am not interested in clearing the DNS cache, I'm interested in using the native macOS DNS resolver from a script. I've looked at man pages for mDNSResponder, dns-sd, scutil, networksetup, and dscacheutil none of which seem to query dns.

It seems taking the effort to formulate the question I understood the problem better to perform more precise google searches and found the answer.

On macOS querying DNS is achieved by:

Like most macOS shell commands it is not quite as nice as the unix equivalent, but it gives me consistent results with native mac apps.

I found this from https://random.ac/cess/2018/04/12/macos-dig-vs-dscacheutil-while-using-split-dns-with-viscosity-vpn-client/

In addition to the great dig (pun intended) of the dscacheutil usage that's not covered by the man documentation, I'd like to add that at the core of the macOs name resolution system sits the mDNSresponder service, and it seems to be gathering all different sources of the lookup information under the common interface.

The tool for interacting with the mDNS subsystem is dns-sd, and as such, there is another way of querying for the DNS records that will honor all available resolvers:

Truth to be told, this is not the best command for scripting as it operates in an interactive continuous monitoring mode that would notify of any changes on the given address until one interrupts it. Although it allows for some fun stuff like watching a VPN-only path to disappear and then reappear when you reconnect:

Not the answer you're looking for? Browse other questions tagged networking macos mac dns or ask your own question.

2
Mac OS X 10.9 treating subdomain as top-level domain?
2
Powershell DNS - how do i search a list of DNS Servers and then filter the results?
1
How to forward local DNS queries to a VM when macOS is in offline mode?
0
How the NS records in zone file work?
0
DNS queries from Linux failing, Windows succeeding - How to Troubleshoot?
1
macos ipsec vpn not using proper dns servers
0
Why does dig not show the authority section and how to make it show the authoritative name servers that hold the DNS query`s answer?