How to run a batch file without launching a "command window"? [duplicate]

On Windows XP, can I run a batch (.bat or .cmd) file, via a shortcut, without a "black window"?

Save the following as wscript, for instance, hidecmd.vbs after replacing "testing.bat" with your batch file's name.

The second parameter of oShell.Run is intWindowStyle value indicating the appearance of the program's window and zero value is for hidden window.

The reference is here http://msdn.microsoft.com/en-us/library/d5fk67ky.aspx

This is just a simplification of Shaji's answer. You can run your batch script through a VBScript (.vbs) script like this:

This will execute your batch file with no command window shown.

Just to expand on the "Use Windows Scripting" answers (which I consider best because it's built-in already) here's how to do it by using a single wrapper script and passing the name of the "real" batch file as a parameter. Additional parameters will be passed on to the batch file.

So e.g. save the above file as NoShell.vbs somewhere then call:

Finally, if you're looking to run this from somewhere that doesn't understand the .vbs file (such as an "External Tools" in Visual Studio), you'll want to call C:\Windows\System32\wscript.exe with the vbs file as its first parameter and your batch file as the second.

Use start with the '/B' option. For example:

You can change the properties of the shortcut to run minimized.

To run it completely invisibly you'll need something else, like Windows Scripting.

Microsoft Security Essentials, and probably most other virus/malware scanners will treat the executable, chp.exe, as a virus because it hides whatever program you specify from displaying a window or a task bar button, just like viruses do.

It's not a virus. It doesn't hide the target process from appearing in task manager for example. And of course the source code is included so you can see that it's very small and doesn't do anything but run whatever program you give it.

You can also just make a shortcut to the .bat or .cmd file, then right-click on the shortcut, Properties, Shortcut tab, Run: Minimized. Then in scheduled tasks, use the shortcut instead of the .bat/.cmd file directly. That will prevent a window from popping up, but a taskbar button will still appear.

You can use window scripting such as AutoIt.

As an example, just write this to the AutoIt script editor. It's fairly simple

If you want to run it in a loop,

Compile it as .exe - and you are done.

Console applications and batch files are regularly run at Windows startup or in a schedule. The main inconvenience of this is that each application opens a console window that flickers on the screen. Hidden Start (or Hstart) is a lightweight command line utility that allows you to run console applications and batch files without any window in the background, handle UAC privilege elevation under Windows 7 and Vista, start multiple commands in parallel or synchronously, and much more. 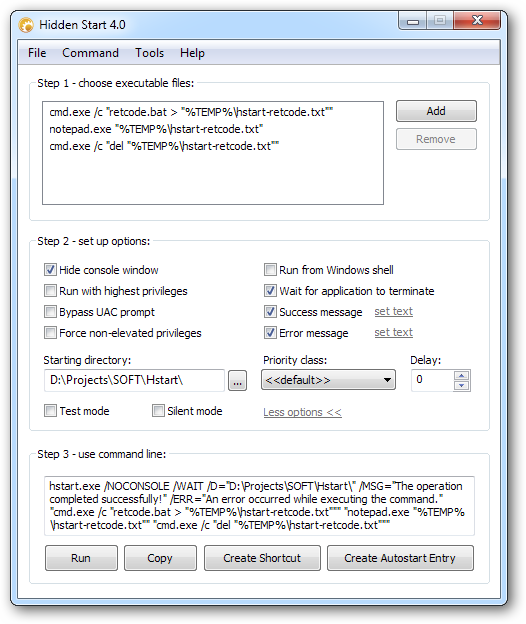 Kyle AKyle A
19177 bronze badges
1
Add a comment  |
Highly active question. Earn 10 reputation (not counting the association bonus) in order to answer this question. The reputation requirement helps protect this question from spam and non-answer activity.

179
Run a batch file in a completely hidden way
67
How do I create a Windows Batch file that does not show the Command Prompt when executed?
5
How do I associate a file type with a VBScript
2
Close command prompt after executing batch file
2
How could I make a timed mute button on windows 10?
2
Batch file process leaves extra command prompt open
1
Program not launching from registry run key
0
Can I tell windows to request network login for network drives on startup?