TL;Dr: Use bcdedit /set {dbgsettings} dhcp No or nodhcp flag.

Recall, that KDNET kernel module operates on a lower level than Windows OS. The "Microsoft Kernel Debug Network Adapter" connection's IP address settings are NOT used, nor the hidden real (Intel/Realtek/Broadcom) adapter, that had its IP address as well.

For example, setting IPV4 address to 192.168.128.1 in Network Connections control panel, the debugger (while connected to switch) reports this:

this correlates to my previous observation that when crossover cable was used:

So a crossover cable with no DHCP server results in KDNET stalling for 10 minutes on DHCP before finally falling back to link-local address.

The kernel debugger (meaning the part embedded in the target computer's kernel) is able to connect a windbg on a machine with a static IP, but it has never supported assigning a static IP to itself. You either use DHCP, or you get a fallback address in the 169.254.x.x range. That range is not routable, so the two computers have to be directly connected.

Note that the IP address assigned to the network adapter by the operating system is irrelevant. The kernel debugger has its own independent driver stack.

Also, communication is done via UDP packets, not TCP... so it doesn't need an IP address really. Here is the Wireshark packet capture showing the DHCP requests using crossover cable: 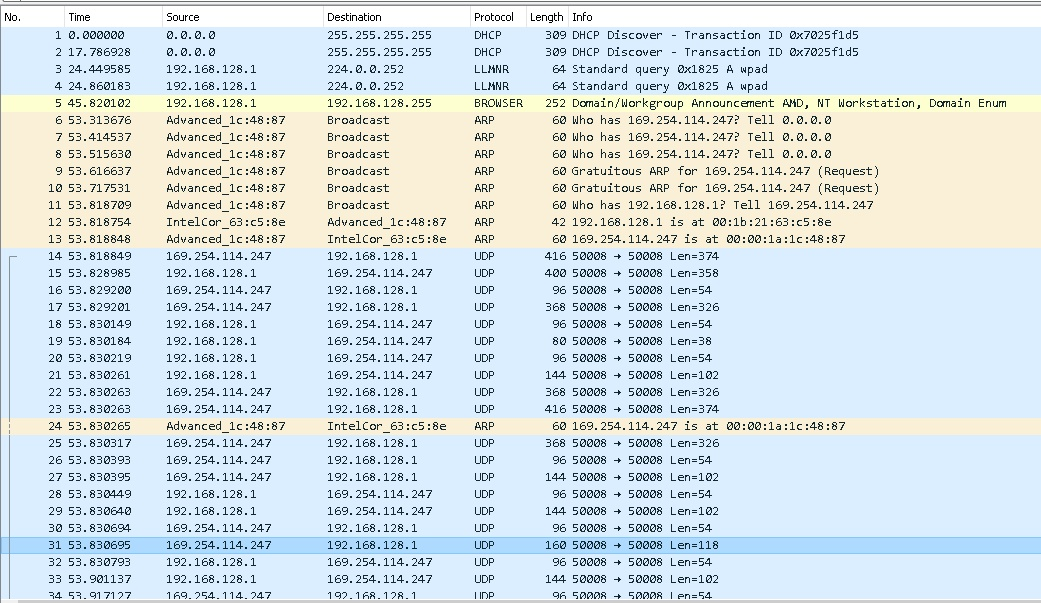 Looking closer at the output of bcdedit and bcdedit /dbgsettings I see windows automatically used the DHCP flag, despite me never adding it. I see they also added a "nodhcp" option, although its hard to find in the documentation

There is also the Firewall issue caused by static networks with no DNS being marked "public", I have this powershell snippet to fix it, but its required on Startup.... I just disabled the Firewall for this target machine to mitigate the issue instead.

Not the answer you're looking for? Browse other questions tagged networking windows-10 kernel debug or ask your own question.