Is "compress OS Drive" worth it on SSD?

My SSD is running out of disk space, and I see that "Compress your OS drive" is suggested as a means to save some disk space. 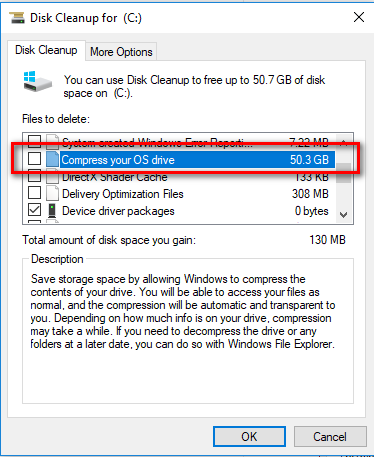 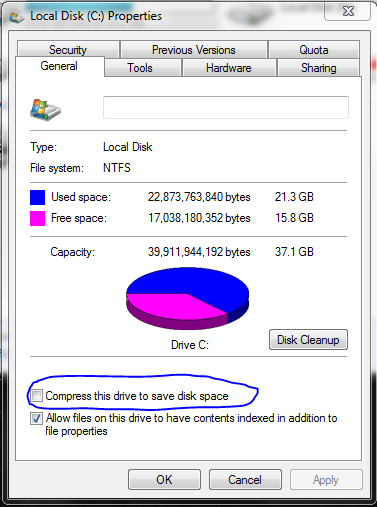 The two compress options aren't the same, but more on that later. The first thing to note is that compressing data is not the best solution when the drive is full. NTFS will suffer badly from lack of space, because there are no more good places to allocate new files or move old files around and fragmentation will increase. Especially when it begins to use the reserved space for the MFT then the MFT might become fragmented and worse things may happen

So at first some other things need to be done:

Just doing the first 2 steps above saves you tons of space immediately. Then after doing everything if more space is still needed then just compact the OS. By deleting files first you also make it faster to compress the OS. The performance difference is often negligible

The CompactOS feature does indeed worth it on small SSDs compared to HDDs. My old laptop has a 1TB HDD with a 32GB SSD cache. I've tried installing Windows onto the 32GB SSD and it ran noticeably smoother than on the HDD+cache

I'm not sure whether there are any performance penalty associating with compressing the OS drive.

Compressing files always have a CPU time penalty. That doesn't mean that it'll be slow though, since on slow storage devices like HDDs that penalty might be far less than the wasted time on accessing/reading the data from HDD. That's why sometimes compressing easily-compressed data will make it faster to access. One example is that hibernation in newer Windows compresses data before writing to disk, which makes shutdown much faster because the CPU can compress faster than the drive can write

The difference may be less obvious on SSDs, but there's no way to know that for sure except benchmarking for your specific situation. Each use case is different, and not all disks are created equal. For example old SSDs may run at only ~200MB/s which is just about as fast as an HDD nowadays (but their obvious advantage is the very fast access time and high IOPs), whereas newer algorithms like LZ4 (which is used in Linux's zram) or Zstd can sustain ~2-5GB/s which is even faster than modern SSDs. See

There's often no need to worry, because Windows will do a benchmark while installing to assess whether CompactOS should be enabled or not. Although after installing apps and things that benchmark result may not be correct anymore and you may want to do a reassessment yourself

Basically both use the compression feature of NTFS and can be configured by compact.exe, but there are many major differences

In fact you can use the new algorithms for CompactOS for any user files, but you can't do on-the-fly editing on them, as they're designed for static read-only files like mentioned above. Writing to those files will uncompress them. For more information about that as you can read NTFS compressed folders: is it possible to tweak compression ratio?

The random on-the-fly write ability also makes the "Compress this drive to save disk space" even worse for your use case, because it increases fragmentation significantly. CompactOS compresses the whole file (AFAIK) like a *.cab or *.wim file so you'll get a contiguous file. OTOH NTFS transparent compression works by splitting the file to 16-cluster chunks and compress them separately. Each chunk will be a fragment after that, which makes your contiguous file now has tons of holes between the chunks.

You may think "why worry about that" but SSD's complete immunity to fragmentation is a myth! For fast operations and small metadata size modern file systems store files as extents which is a file's contiguous section on disk, so each fragment will be stored as a separate extent. Hence a file with 1000 fragments will consume more space in the MFT for the metadata compared to a 2-fragment one, and the CPU also needs more time to parse them to get the next block of data. As a result Windows defragmenter still does some mild defragmentation for SSD drives to optimize metadata usage

The link given by Xen2050 is also good. It shows that even with the drive compression feature the difference is not that much, and in some cases it'll be faster, as I mentioned above

304
How can I visualize the file system usage on Windows?
179
Why does the /winsxs folder grow so large, and can it be made smaller?
176
Two blue arrows at top right of icons
44
How can Windows 10 function on as little as 32 GB of disk space?
23
Why don't the sizes of my folders add up to the size of my hard drive in Windows?
27
Moving Windows folders around with Junction links (mklink)
30
What if I checked the box "Compress this drive to save disk space" on an SSD?
20
NTFS compression on SSD - ups and downs
18
NTFS compressed folders: is it possible to tweak compression ratio?
17
What does a blue filename in Windows Explorer mean?
See more linked questions

4
How does the Windows 7 compression property weigh in against other compression methods?
11
Compress Similar Files Efficiently
1
Should I compress the harddisk file in a virtual machine?
0
Rebuild laptop and specify Windows 8.1 should use small SSD
3
Can compression of folder be undone when it comes to slow?
0
Is it better to replace to my optical disk drive with SSD or HDD?
0
Windows 10 SSD maintenance/defragmentation/compression query