How do I get rid of the “Finalise the string” pop-up for complex scripts in Word 2010?

When typing in Sinhala in Word 2010, a tiny pop-up box appears in the top left corner (it can be moved anywhere else) with the last few keystrokes. There is a green left-downwards pointing arrow to "Finalise the string" (this text appears if you hover over the arrow).

When I type "සිංහලා" ("Sinhala"), "සිං" is automatically "finalised" and appears in the document, then "හලා" ends up in the box. It seems related to an issue in Windows 10 that the last word/part of a word disappears when I change from Sinhala back to English, if I don't type a space, or move the cursor first. E.g. in any program other than Word, after typing "සිංහලා" and nothing else, "හලා" disappears when I change back to English, just leaving "සිං".

What is this feature and how do I get rid of it to type directly in Word? I've never seen this in any other program, including Excel 2010. I have the සිංහලා (Sinhala) Language pack installed. 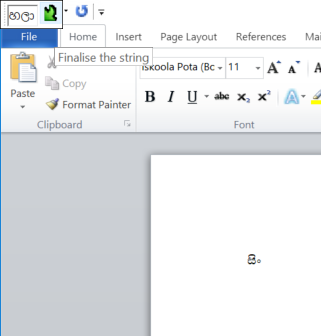 It seems this box is part of IME. Word help says:

Turn Japanese Input Method Editor (IME) on 101 keyboard on or off.

Turn Korean IME on 101 keyboard on or off.

Turn Chinese IME on 101 keyboard on or off.

As expected, none of these work for the Sinhala keyboard. 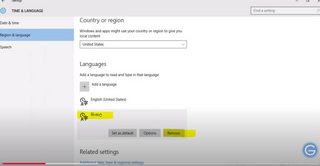 Then install the Windows 8.1 IME to Windows 10 http://www.gurulk.com/download-sinhala-tamil-language-kit-ime.php

Now you can directly input Sinhala as needed.

This is not a real solution but I think it could help. For anyone want to stick with your language IME for everything but at the same time use default english input in some specific apps:

Now go to your app window that you dont want to use IME, select the input language in taskbar as English (default). And window will remember your preference for that app even after you close and re-open it.

Not the answer you're looking for? Browse other questions tagged windows-10 microsoft-word-2010 input-languages or ask your own question.

56
Set Windows 8 to per-application input language mode
3
Get rid of gray brackets arond editable text in restricted Word docs
8
Complicated input language and display language setup in Windows 8
1
Spell checking in Word automatically turns off
0
Japanese IME is behaving strangely (MS Word 2013)
0
Is there a way to reset or repair (keyboard) input methods in Windows 10?
2
What is strange square above input in start menu in Windows 10