I've created a Pivot Table that looks like this: 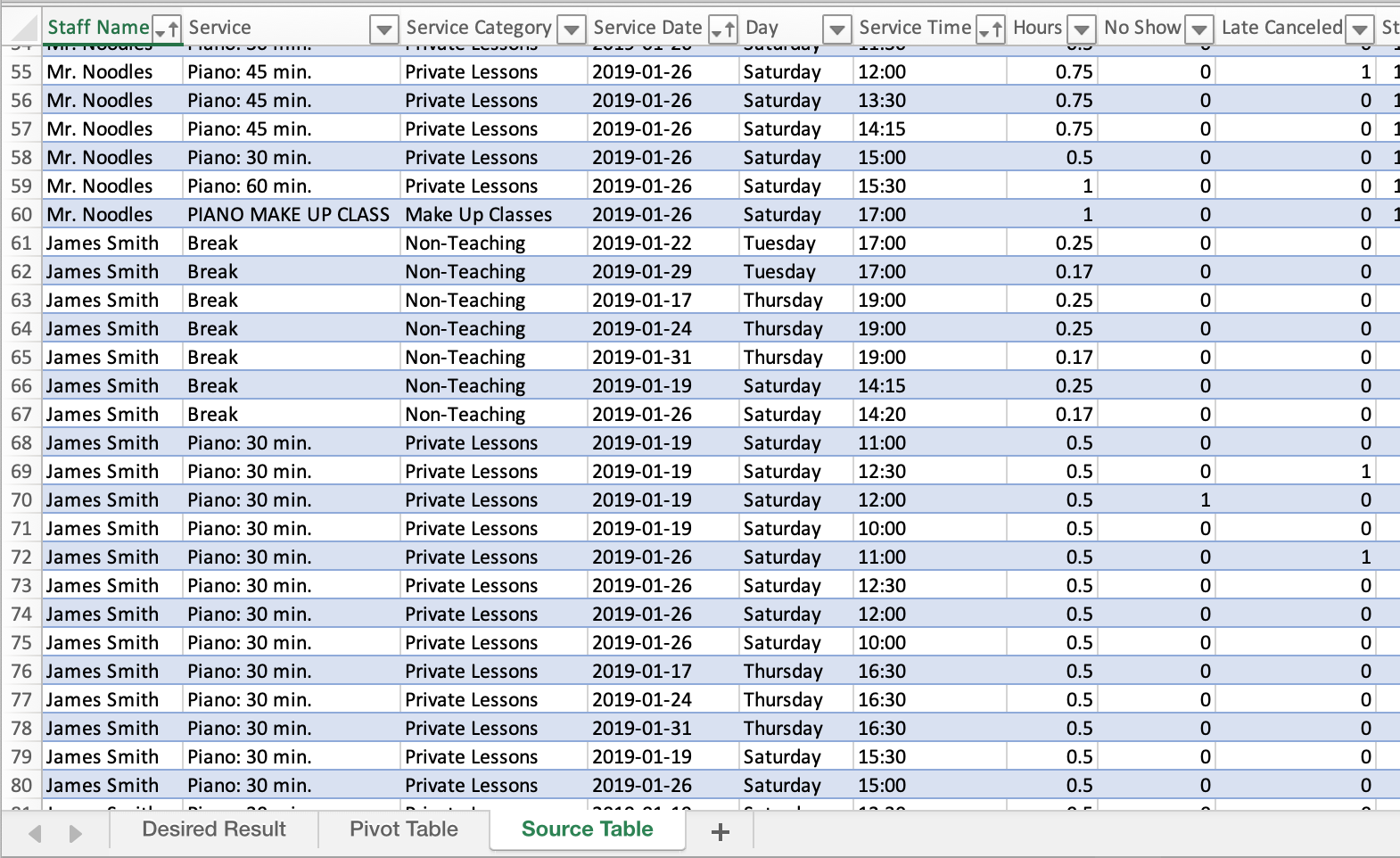 I am trying to add one more value to the table, "Cancellations" (which are already included in the "Private Lessons" total). I created a set to add the "No Show" and "Late Canceled" columns together for that value. This is what happens when I add that into the Pivot Table: 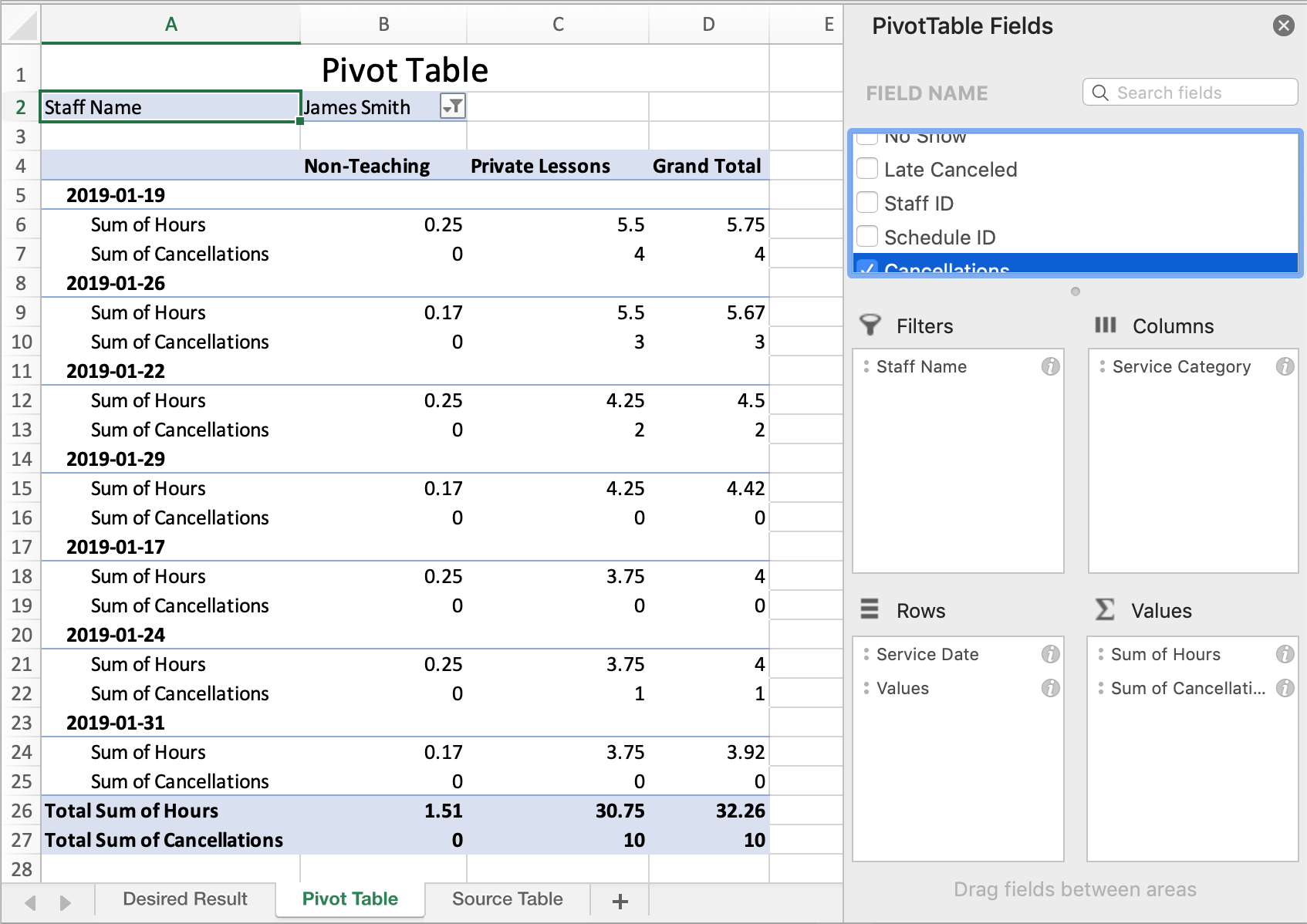 The main thing I'm trying to achieve is this: 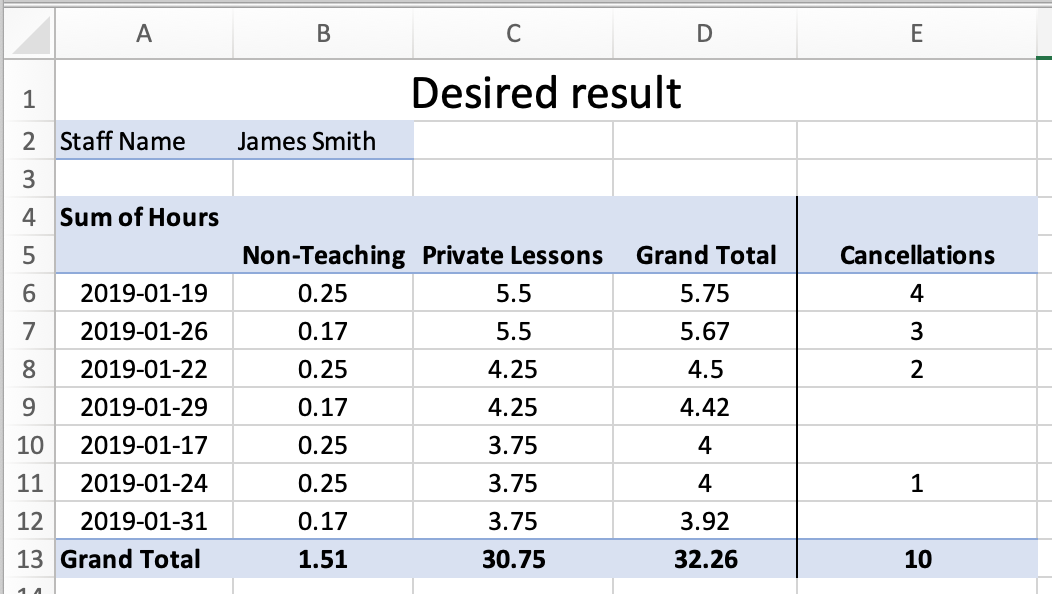 (Or perhaps someone knows of a more elegant way of presenting this data). But I just can't seem to separate the Cancellations value into its own column, it seems any new added field must be nested, no matter what Pivot Table area you put it in.

I need to be able to use the "Show Report Filter Pages" feature to generate many pivot tables across sheets, otherwise I would just create a second pivot table side by side.

A side goal is for the cancellations to be calculated as a sum of Hours, rather than number of cancellations.

Is there a way to achieve this? I attempted many Google searches, but I wasn't quite sure how to word this problem and could not find a solution.

Add a derived Column to your table. Lets call it Service Category Derived. Enter this formula into the first data cell of this new column:

changing the column names and table name as needed.

If you want the No Show and Late Cancel to be a single category, then use:

changing Special to a the name for the "No Show OR Late Cancel" category.

The hours will also be fixed with this adjustment.

Edit: How to manually enter the formula using cell selection.

The "No Show" and "Late Canceled" columns appear to be used like boolean and not a Count or amount so making them Boolean would make the formulas easier to read since there would be no need to compare to zero <>0 that text could be deleted =IF([@[No Show]],Billing[[#Headers],[No Show]],... (which reads: If this row's data in the "No Show" column is true then use the table header of the "No Show" column). Further, since false is the default for boolean, empty cells would be considered false (e.g. not a no show). So only TRUE need appear in those cases where it is a "No Show" and leave all the false cells blank making the data easier to visually digest.