Are all power cords made equal?

Referring to this type of power cords that either attach directly to the PSU, or to a power adapter that powers the monitor or laptop.

Is there anything to watch out for when swapping these cords, or do we only care about the adapter voltage/current requirements? 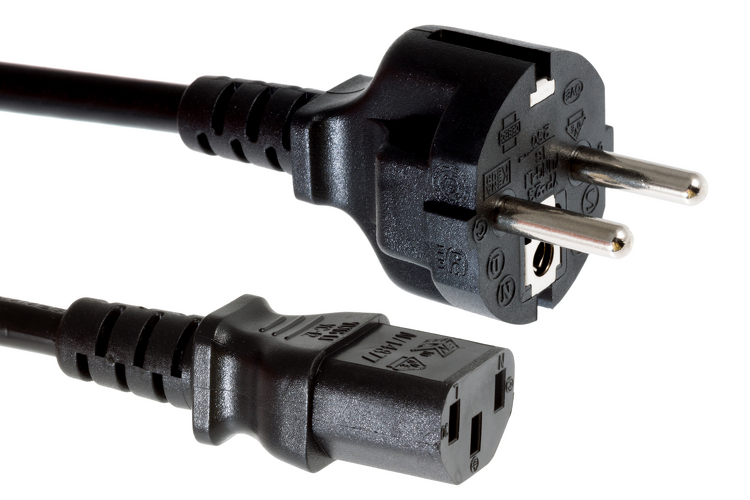 Are all power cords made equal?

Be on the lookout for poor quality cables, and throw them away recycle them... see below for more.

We are seeing more and more "unsuitable" cables packaged with things on eBay which have poor insulators, many strands of thin conductors, etc... look up "Big Clive" on YouTube for some interesting videos about such things.

For a good overview of poor cables, have a look at bigclivedotcom's "How to detect sh***y and dangerous aluminium flex" video.

Is there anything to watch out for when swapping these cords, or do we only care about the adapter voltage/current requirements?

This is the diameter of the conductive wire inside the cable – see American Wire Gauge / AWG for a common measurement.

A thicker cable can carry more current, but costs more and is less flexible.

An important factor is voltage drop due to resistance, and the potentially dangerous side effect of internal heating which can lead to melting the insulators, fire, death, etc.

Copper is a relatively good conductor of electricity (low resistance per distance), it's flexible, abundant, etc... This makes it quite suitable for use in cables. However, due to the demand for copper, it has become more expensive, and alternatives have appeared – in particular "copper coated aluminium". Aluminium being a worse conductor of electricity than copper (for a given cross section – higher resistance per distance, approx 61% as good) raises the potential for internal heating, melting, fire, death, etc.

More strands of finer conductors can make the cable more flexible... which is pleasing to handle – but this can also cause problems and reduces the cable's ability to carry current.

This can also play into internal heating, melting, death, etc.

Mains cables have been insulated by many things over the years – from fabrics, rubber, and various other materials.

You'll typically find that modern "mains" cables are double insulated, with PVC. By this I mean that each internal conductor has a layer of insulation (with the appropriate color), and the whole cable is then insulated by a second layer.

The material used plays an important part in the cable's resistance to heat and over-voltage situations.

I presume you live in Europe, which I imagine means that you're also aware of unearthed connectors – like the Europlug for example, pictured below. Other places will also have similar things. 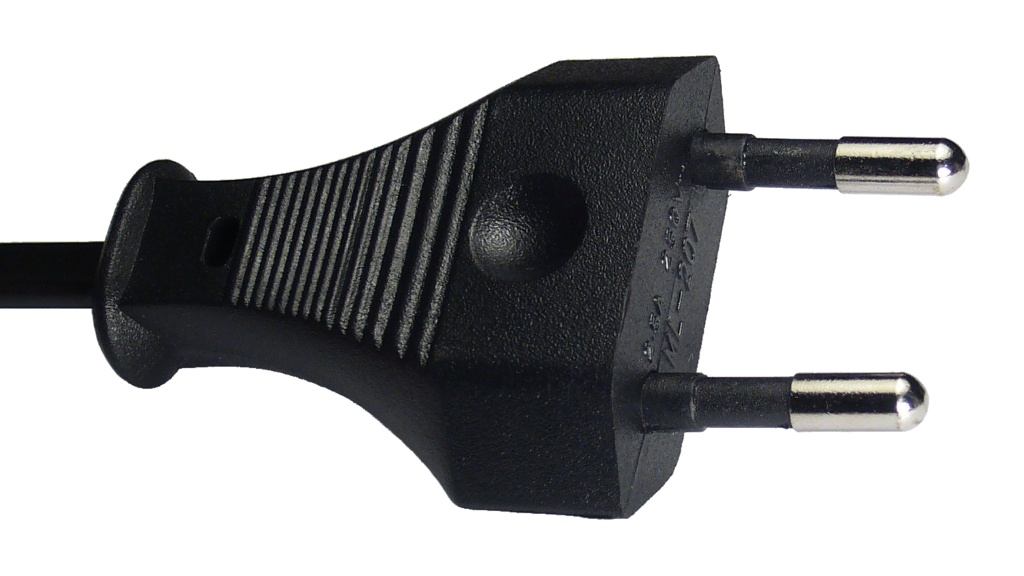 IEC 60320 outlines the C17 and C18 pair that do not have an earth pin. Luckily a cable like this will not mate with a C14 (the receptacle that mates with what you've pictured), but that doesn't stop misunderstandings or ignorance, and could almost be considered an invitation to omit the earth conductor.

The C17/C18 are used for the XBox, and while, strictly speaking, it's illegal to produce a non-earthed appliance without ensuring that it is "Double Insulated" (aka Class II), as touched on above, that might not stop everyone.

The UK requires a dummy earth pin for double-insulated appliances to open the socket's live and neutral receptacle (reason #1 to be a fan of the UK's connectors).

Another thing that I am proud of the UK for is our 13A mains connectors – as outlined by BS 1363. I don't off the top of my head know of another major mains connector that has a fuse built-in – what you've pictured certainly doesn't, America doesn't, etc. 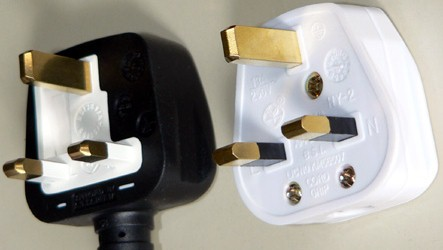 Without a fuse, you must ensure that all cables are able to carry the maximum current permitted by the outlet, as there isn't going to be a fuse until (hopefully) the appliance. This means that all cables must be heavy, of the full gauge, and expensive.

With the UK mains connector it is possible, though perhaps not necessarily a good idea (more on this below), to down-rate a cable or individual appliance – say to 3A, instead of the full 13A. Additionally, if a cable is overworked, the insulators melt, and a short occurs... the fuse should trip and make things safe – if the RCD that is hopefully in place hasn't done so already.

I suggested that down-rating isn't necessarily a good idea, because people are prone to going "Oh no, the fuse blew... I'll try a 13A one". And with some people you'd be lucky if they didn't wrap the old fuse in tin foil instead...

Today, virtually every cable bundled with an appliance comes with connectors moulded into the ends. I believe the thinking behind this is that it's safer and prevents them from being rewired incorrectly. It also makes the wire-to-connector joint considerably stronger – protecting against the wire being "yanked" out of the connector, potentially revealing live conductors.

If the over moulding separates from the flex's insulation, or there is a gap between the two, then this extra "yank"-proofing is not present. This can be an indicator of a poor quality cable.

The over moulding also usually adds strain relief, which will prevent sharp bends at the connectors from splitting the insulation – again, potentially revealing live conductors.

Connectors that can be rewired will (should) have a clamp to offer such "yank"-proofing... but there is no guarantee that it hasn't been left loose, over-tightened or removed entirely. In addition to this, there is an amount of skill required to safely rewire connector – ensuring that the double insulation extends into the connector all the way, and none of the inner insulation is visible from outside.

If copper is as thick as declared (some Chinese cables sometimes aren't as thick as advertised: you can identify them because gets hot when used). 0,75mm^2 should be fine for any PC on both 110V and 230V. 0,75 flexy is often used in space heaters where current are 3x computer usage. So use good quality 3x0,75 flex cord would be fine for any apliances drawing up to 10A.

Have a look at the cables and their connectors and what they say. Unless you got some very cheap cables it should be fine to switch them around. Just by looking at their exterior you can't say much about the actual inner structure. The cable "gauge" is important for what you should be using it for but as it's a standard product there shouldn't be much variance unless you go for very cheap cables.

Look at the markings on the cable

This will typically be in square millimeters or American Wire Gauge (AWG). (Above: 500 MCM is neither). You can look online to see if this satisfies your ampacity needs, keep in mind flexible cordage is allowed slightly higher amperes than would be permitted for in-building wiring where it is packed in with insulation.

This is also important if you like to bundle bunches of power cables for neatness. If it were permanent building wiring, you are not allowed to bundle more than 3-4 before being obliged to derate the cables, reduce their ampacity or upsize the wires. For instance I once wanted 7 circuits in a conduit. I would have had to derate from #12 wire (20A nominal) to #10 (30A nominal). Heat created is a square function of amperage, so 20A makes only 4/9 of the heat that 30A would.

UL Listing or equivalent - this takes care of so very much

Look for the mark of a recognized testing lab. That will ensure the cable is basically what it says it is. Note that CE is not a testing lab: it stands for "Chinese Excrement". Seriously, CE alone means no reputable lab would go near that thing. * The National Electrical Code (110.2, very first page) and most other Codes require you use equipment which is approved, and that means by a real lab (specifically a NRTL). Above: (UL). But check the factory molded plug and socket, as that's what certifies the assembly.

Any Competent-Lab approved cable will be made with appropriate cordage. But you can check that too.

This will vary by nationality and you can look yours up. Cable type will also address environmental conditions, such as damp locations, outdoor, or high or low temperature locations. For instance a UL listing is not enough to establish that a cable is fit for corrosive environments.

The Respected Lab listing will take care of this for you, but you can also look for types fit for cordage (e.g. SJOOW in the US) not house wiring (e.g. NM, SER, UF, THHN). Any "fit for cordage" type will imply this is stranded wire, and will imply not aluminum unless the wire gauge is enormous. These are things you need to pay attention to if building your own cords from cordage and connectors.

Above: TYPE THHN OR THWN-2 means it's dual-rated for THHN and THWN-2. Whoops, this is wire, not cable, and not fit for cordage. But notice how every mark means something! Our example cord also calls out special UL categories for "AWM" and "Gasoline and Oil Resistant II".

Things like right angle connectors, connector keying, etc. The UL etc. listing will assure ground wires are in the cable if the ends call for it.

Be aware that some high-power appliances may come with a "trick" version of the normal plug, that is keyed to fit only high-current versions of wall receptacles, e.g. the US NEMA 5-20 or Australian "tall prong" 20A plug/socket.

* CE is an "honor system" self-certification. It means the manufacturer promises they used non-lead solder and voluntarily adhered to many other care-of-construction standards; it has nothing to do with testing labs. The upside is that scamufacturers are less likely to counterfeit UL and other NRTL marks. Why risk it, CE fools 99% of people. Honestly, I halfway think CE did that on purpose to protect the genuine NRTL marks, it's like they "threw themselves on the grenade" of the counterfeiting problem.

Well, there are C13, C15, C15A plugs for the various temperature grades. You cannot plug a cord for a cold computer into a hot water kettle, but the other way around is okay. Also you can plug a grounded cord into an ungrounded appliance, but not the other way around. See: https://en.wikipedia.org/wiki/IEC_60320

There are also some rare power cords with built-in EMI suppression coils and/or shielding. These are best used with the device they came with, e.g. a TV. That TV with a regular cord may not be EM compliant. The cords will fit other devices but they may run warm, and they are too .. exclusive.

In addition to other answers, I consider it necessary to pay attention to the presence of ground wire. Some cheap three-contact cables, especially from East Asian vendors, may have only two line/neutral wires but no ground wire inside.

It is impossible to detect ground wire presence/absence visually or by touch because the cable may be as thick and hard as normal three-wire cables. The best way to test the cable is to use an ohmmeter or a conductivity indicator.

2
Power cord ratings (Volts, Amps) for monitor?
2
Insufficient power from an adapter
12
Using multiple power supplies in one PC
4
Why are WD hard drive specs inaccurate?
0
PC doesn't start. Power lights blink once
0
Interchanging Laptop Chargers
0
Dell Optiplex 790 - Won't power on
2
I have NEC laptop that have 7A/125V power cable with us plug and want to use us to eu plug adapter