Notepad++ how to auto-close all tabs when selcting new file(keeping only the active tab)?

My machine is slow, so whenever I open new file(by double click) I would like to have the previously opened tab(s) auto closed.

In Notepad++ 7.5.7, I am opening a folder as a workspace, and every time I open a new file, I need to right click and select close all but this, is there a way to do that automatically from settings?

In other words, when you open a new file, the others gets closed automatically, only one opened file(tab) at a time.

I tried limiting recent file history to one, but it is not the key.

I think the idea is to limit the number of opened tabs to 1, but how to do that?

I only saw three possible ways of solving this problem; the first two have been rejected; maybe the third will work.

Each method is described in greater detail after, with the older ones pushed lower as I've edited the answer.

THREE: Use a scripting plugin

Using the PythonScript plugin (or the LuaScript plugin, or possibly the jN Notepad++ Plugin), it is possible to attach a hook ("register a callback") to the event that's triggered after a file is opened in Notepad++ (in PythonScript, this is called the NOTIFICATION.FILEOPENED event, on the Notepad object). That function needs to close all files but the recently-opened file.

Actually, there's not much more to it than that. It will only be a few lines of code, even with the wrapper, so I'll write it for you.

From now on, it should close everything except the open file.

Oh, you'll also want Settings > preferences > backup > remember current session to be turned OFF, otherwise when you first open, there might be a second file open (though, after that, if you open a file, it will automatically close any that were opened).

if you want to undo this, just comment out the two lines from startup.py and restart Notepad++; after that, Notepad++ will allow you to edit multiple files again.

TWO: Use a shortcut as a workaround

Inspired by @Toto's comment under another answer, you can assign a shortcut to multiple actions, if you use a macro.

This will not influence Windows Explorer RClick > Open With Notepad++, or Notepad++'s File > Open. But it will give you a way to automate the process in one menu command or keystroke.

Thanks @Toto for the germ of the idea.

ONE: Can't be done by a setting (ORIGINAL RESPONSE with edits)

If you disable Settings > Preferences > Backup > ☐ Remember current session for next launch, then Notepad++ won't try to remember what files were previously open, and will just start with whatever you launch Notepad++ with -- either a blank file if you just hit your shortcut, or whatever file you're editing if you're launching from Windows Explorer or similar

update: your clarification did help me understand what you want. If you change your shortcut (and any registry entries) to include the -nosession -notabbar options, then I believe it will behave the way you want: it won't remember previously-open files when you first run Notepad++ (ie, enforcing the disabled ☐ Remember current session for next launch), and it won't have the tabbar, which (I believe) limits you to one open file at a time. I've never used this mode.

You need to be careful, because there's an asNotepad.xml file (see here and here for details, searching for asNotepad.xml in each page) which, if found, will run Notepad++ assuming -multiInst -nosession -notabbar options always enabled -- the -multiInst allows there to be more than one copy of Notepad++ running (similar to Windows being able to open more than one notepad.exe simultaneously). Since you're worried about memory, you don't want multiple Notepad++ instances open simultaneously. The other problem with multi-instance mdoe is that if you change settings in one of the open instances of Notepad++, they won't propagate to the others... and the final settings saved to disk will be the settings for whichever instance happens to be closed last.

update 2: I just ran some experiments. -notabbar isn't sufficient: if you open a second file with -notabbar active, it will still have both files open, as can be seen from Notepad++'s Window menu, which will still list both files being open. So now my answer becomes: 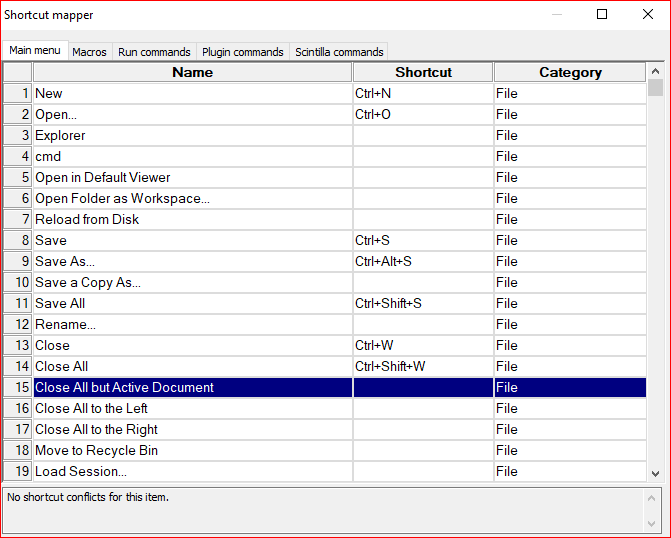 then choose the shortcut you want

74
Closing Notepad++ tabs on closing application
3
Notepad++, how to count tabs in a tab delimited file?
66
Switching to tabs to the right or left of the current tab in Notepad++
13
prevent Notepad++ from resizing when a new document is opened
5
Sometimes tabs in notepad++ won't make a new window when dragged out
0
How can I improve window/session/instance/tab/file management and organization in notepad++?
0
Notepad++: Double Click on Tabs bar to open new file
0
How to save all unsaved tabs in my notepad++ automatically with some default file names?
1
How to delete all the open files in notepad++