However the USB3.1 ports on the new hub dont work, when I plug in a flash drive, nothing happens, Windows doesnt seem to notice the drive has been plugged in. When I reconnected the old USB3 ports, they worked still, so I think that should rule out the possibility of damaging the internal header when I was removing the cables/connectors.

I have tried the hub in a different (newer) PC and there the USB3 ports on the hub worked correctly.

Despite the title question, Im not entirely certain which USB version is supported on the older motherboard, as I couldnt find a proper spec sheet.

The motherboard model is (according to CPU-Z):

Best spec sheets I could find are here:

(this site worked yesterday (15. march) but seems to be down today)

UPDATE: the site came back on, so Im adding a screengrab in case it goes down again. Pegatron 2AB5 specs

UPDATE: this HP site probably is not the exactly same model and should be disregarded

The USB hub in question is Akasa AK-HC-11BK, specs here:

And the other motherboard (where the hub works) is Asus B85M-G, specs here:

Could it be because the newer PC has support for USB3.1 and the older one doesnt? So could it be that a motherboard that only supports USB 3.0 doesnt work with USB3.1 hub ? But shouldnt the hub just operate at 3.0 speeds in that case?

When searching on the internet, I have only found the opposite situation, people asking if USB 3.0 hub will work with 3.1 motherboard.

UPDATE 2: The original USB ports on the front panel are blue and have the SS USB symbol next to them. I have tested copying a 2.5GB file from a USB flash drive (Kingston Data Traveler 3.0 32GB, https://www.kingston.com/datasheets/dtr30g2_us.pdf) . When copying from the flash drive to a mechanical hard drive using the original front USB port, Windows reported a consistent speed of around 138MB/s. Thus it seems that the original port is indeed USB3.0 at a minimum.

Here is what the device manager looks like. This is when the original front panel USB is connected and 2 of the Akasa's USB2.0 ports are connected (using a single 9-pin cable to the motherboard) Device manager

I have put the serial number in HP support site (per telcoM's suggestion) and it does list Texas Instuments USB 3.0 XHCI Host Controller drivers.

I will try to install them and report back.

Looking at its manual, it seems like Akasa AK-HC-11BK is not an USB hub. It's basically just a mounting box that fits into a 5.25" drive slot to provide a front panel for mounting the connectors.

Since the number and capabilities of the cables exactly matches the configuration of the ports in the front panel, I'd assume that all those cables are simply directly wired to the respective ports. So, referring to the letters in the manual's picture:

And the technical specifications of your motherboard seem to say that it only has 4 internal USB 2.0 headers - no USB 3.x headers at all. The service manual says otherwise.

Furthermore, Intel says the H67 chipset only has USB 2.0 support. So any USB3.x support with this chipset must come from an add-on USB3 controller on the system board. Does the Windows Device Manager indicate you have one?

Searching for "HP Elite 7300 MT", I found this specification page from HP. It confirms the system uses Intel H67 chipset, and your "Pegatron 2AB5" specification concurs. On "USB Support", it says:

Note that only an EHCI USB 2.0 controller is listed: that means no USB 3.x, period. And although it says there are supposed to be two USB 3.0 ports at the front panel, the title for that section is "External USB 2.0 ports"???

As it turned out that your system actually has a Texas Instruments XHCI USB 3.0 add-on controller on the motherboard, my next guess would be that the 19-pin header could be based on a preliminary version of the relevant standard, and so be just different enough to only work with the cable and ports that come with the chassis itself.

According to HP service manual, the PC may or may not be configured with USB 3.0 ports. While the mainboard pictures do show the 2x10 2-mm pitch "mid-board" connector (circled in red): 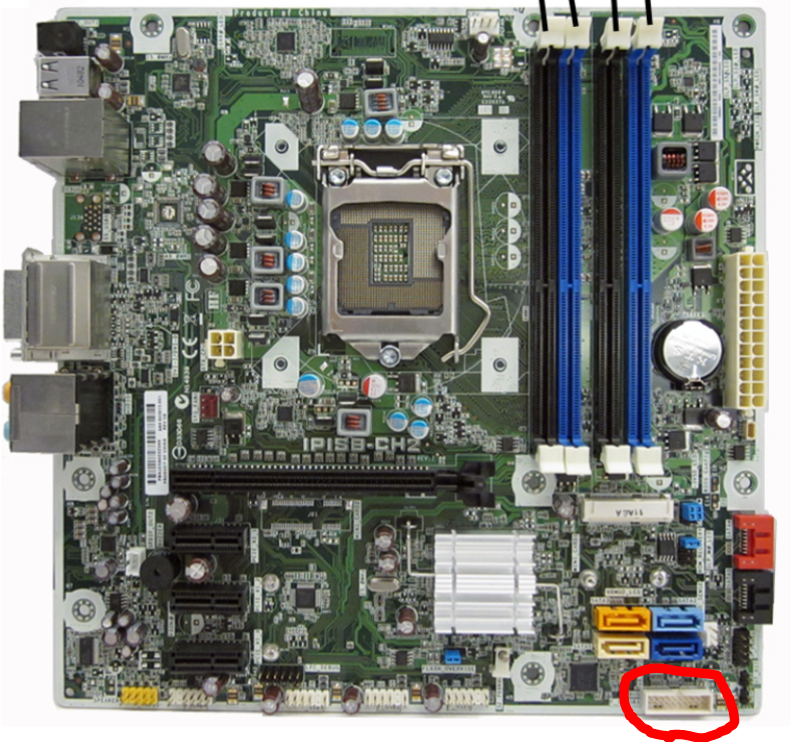 the manual doesn't mention any 20-pin USB 3.0 cable extention. More, in this particular picture the USB 3.0 back connector seems to be non-populated.

My hunch is that at the time of PC release the Intel USB 3.0 controller was not yet functional, and thus resulted in crippled line of mainboards.

In short, it looks like you need to forget about having USB 3.0 front panel using the Akasa front extender on this specific 7300 Microtower PC.