Is there a RAID 0 Equivalent for RAM?

With hard drives, you can put them in a RAID 0 configuration to split data between drives to increase read and write speed. Is there an equivalent of this for RAM? If I have 16 GB of memory, for instance, can I split it into 2 8GB sections and implement striping across them? Note: I am not talking about using ramdisks at all. I am not trying to treat ram as hard drives but rather to speed it up. I have heard that there is a RAID 1 equivalent for RAM called mirroring, but I have not heard of a RAID 0 equivalent.

Consumer-grade computers have supported this for years now. You don't have to enable it explicitly, but you have to install RAM sticks into the correct slots. Those are usually color coded, but there's no standard for this: some manufacturers mark slots on the same channel with the same color (so for dual-channel you have to use different colored slots), some use same color for slots that will enable dual-channel. Long story short, check with the manual.

Server-grade motherboards can support triple-channel or even quad-channel if the CPU can support it too. (see the comment by J...)

Like Raid 0, it exploits the fact that the CPU is often much faster than RAM and that there are lots of instances where you are basically streaming data to and from RAM. The memory controller allows the CPU to initiate the next write without waiting for the current write to complete.

For reads it works a bit like DMA where the memory controller will be told to prefetch the next values from RAM before the current data read is complete.

Yes, there's indeed an equivalent. But generally you just need to follow the instructions for your motherboard when adding RAM, and the setup will be automatic.

Technically this depends on your CPU, but in practice all CPU's that fit in the socket of your motherboard will use the same interface to RAM.

As the other answers have covered, this has already been available for over a decade.

What the other answers do not cover is that 99% of people will not notice a difference. The biggest advantage for the average user is that dual-channel (or better) memory configurations help noticeably in gaming performance when using an:

If you look up specs for LGA 775 motherboards then you will find dual-channel support going back even further such as https://www.newegg.com/Product/Product.aspx?Item=9SIA4RE8205361 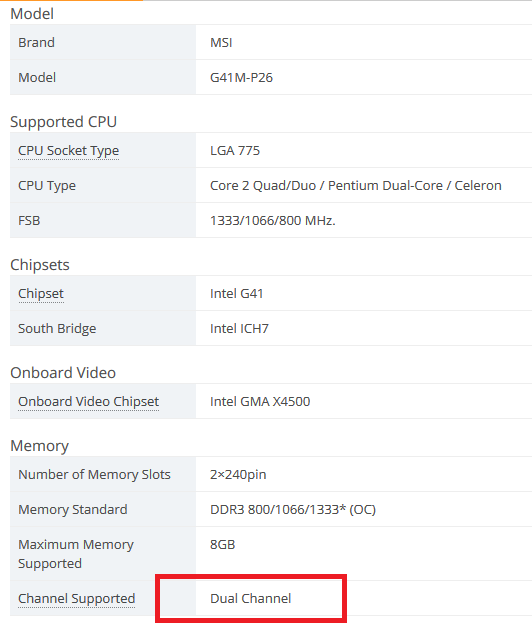 Not the answer you're looking for? Browse other questions tagged memory raid raid-0 or ask your own question.

13
What's the difference between RAID 1 software mirroring and Fake RAID?
9
Can someone explain RAID-0 in plain English?
0
Does RAID 1 allow using the entire drive or does it entail some overhead?
0
Lost RAID after boot
1
RAID striping on a desktop machine
1
Software RAID 0 under Window 7 on 2 HDD only (including system drive) - is it possible
0
Is there a RAID mode that allows files to be on one physical drive of the array?
1
Is this explanation of RAID striping incorrect?