Is it possible to sum an entire column without setting explicit cell boundaries in Excel?

I'd like to sum all the values in a column starting from a certain minimum value, but I don't want to give an upper bound because any value in the table will be appropriate for summing (minus the header of course) and I'd like to do it the "right" way instead of summing A2:A65535.

Just leave off the row numbers:

Note that this expression cannot be placed in column A (that would cause an endless recursive summation which Excel won't allow).

If you instead wanted to sum all of the rows in column A above the current row (say 51) you could do this:

If you ever move the cell that holds that expression it would change the A50 to whatever is above the current cell while keeping the starting point of the summation (A1) the same.

The same thing can be done if the total is kept above the summed cells in the current row (say row 1):

In the case of Google Spreadsheets you can do the following:

It will sum all rows in C column starting from the 4th row.

In my case the fields I didn't want to include in the range actually did have numbers in them. I was stumped until I figured out that you can just sum the entire column and then simply subtract the fields you don't want:

Where the first six rows of column B are numbers but not relevant to the data I want summed, and column B contains an indefinite number of rows of information.

I wanted to sum C2:C∞ and used a strange solution:

I placed the formula =SUM(C:C) inside B1, then used merge cells command to merge B1 and C1. Result was like this: 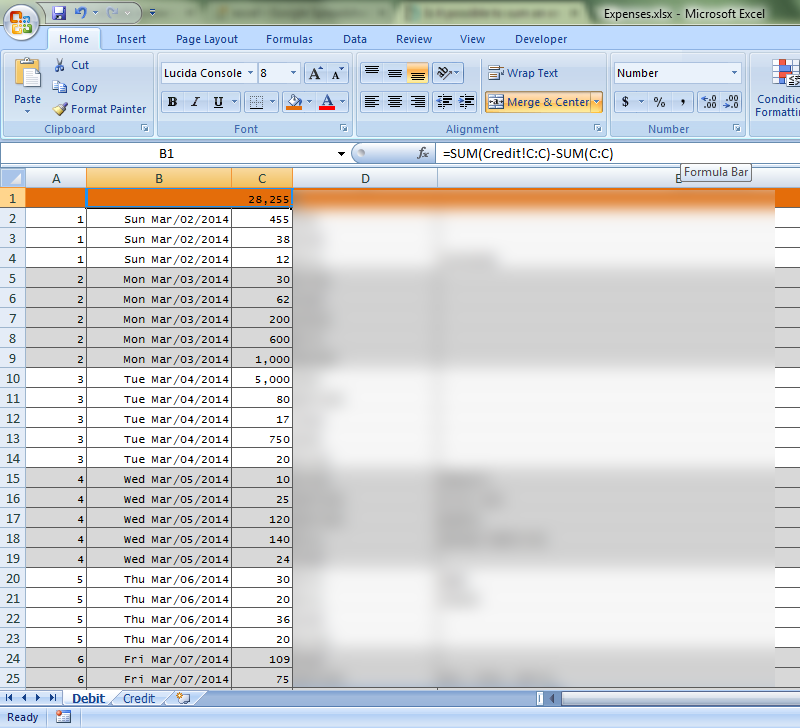 18
Sum contents in column from starting cell on down without setting an explicit last cell index
1
Excel SUM function for whole column?

4
Summing a column in the same column without a circular reference
18
Sum contents in column from starting cell on down without setting an explicit last cell index
1
How to do a sliding window in an excel table?
2
Excel formula sum multiple rows/column once on cell has reached it's max number and continue to sum
0
Excel: Get sum if value of another column is non-blank?
1
Sum values for qualifying entries without double-counting in Excel
0
Excel: Sum rows of numbers between certain values in adjacent column
2
Excel: Sum up a column based on conditions
0
Look for value and sum specific column interval - Excel