Intel speed select is a new feature to adjust different core to operate in different freq to have a better power efficiency.

However, in my understanding, Linux can adjust CPU freq individually, what's new from Intel speed select ?

If your job only consumes part of these cores (ex: high freq CPUs ), then you get better performance, if your job needs all CPU run in max speed, you can't get benefits.

Intel® Speed Select Technology is a collection of features that provide more granular control over CPU performance. Traditionally the processor has certain characteristics that are shared across all the cores on the package, such as a fixed base frequency, a thermal limit, or a power envelope. Intel® Speed Select Technology - Performance Profile (Intel® SST-PP) changes the situation by creating the opportunity to assign specific characteristics to groups of processor cores.

-- SST BF can be emulated -- https://github.com/intel/CommsPowerManagement/blob/master/sst_bf.md

If a suitable BIOS or Linux kernel is not available on the platform, SST-BF may be emulated by setting the min and max frequencies high on some of the cores. Typically this would be 6 or 8 cores at 2.7Ghz, and the remainder of the cores at 2.1GHz on a 20 core CPU.

From the datasheet that you linked the difference for this new mode is an asymmetric clock speed setup.

It has a group of cores which have their maximum speed set higher than the remaining cores so that you can prioritise tasks and processes in a much more deterministic fashion, assigning processes that need more consistently high clock speed to the priority cores.

Without this mode while cores might be able to be dynamically scaled via turbo boost their performance will be somewhat random due to other cores ramping up and down as the system load changes and the CPU scheduler adjusts things. This method gives a more consistent and reliable speed.

Intel® SST-BF allows the CPU to be deployed with an asymmetric core frequency configuration. 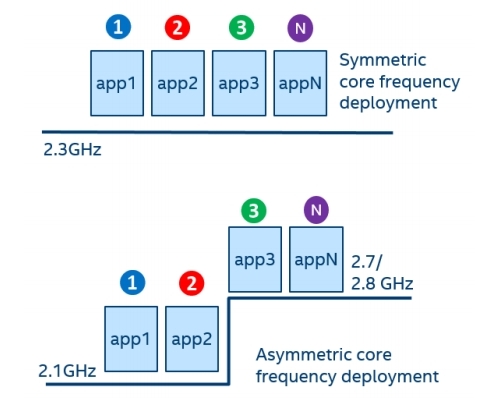 High power tasks can be assigned to the higher clocked cores and still have the lower clocked cores doing effective work while contributing slightly less to the power budget. In this way it is slightly similar to the ARM big.LITTLE architecture in that you have a high-clocked group and a low-clocked group of cores, but in this case they are identical cores.

2
Processor not running at max speed
0
Meter for Intel Turbo frequency
1
How to find different Intel processor's P-states?
0
Understanding the differences between different Intel processors
6
What does the BASE clock speed of an Intel CPU really signify, now that we have Turbo Boost and SpeedStep
5
Cpu running half speed
79
Why do we have CPUs with all the cores at the same speeds and not combinations of different speeds?
0
How does BCLK work in regards to “overclocking” non K Intel CPU's
2
Intel Core i7-8550U, Turbo Boost not working?