Windows Defender found one threat, but won't allow me to take action

My Windows 10 x64 pro is up to date, at build 1809. Every once a while, the defender program will notify me that it has found a threat. But it does not say what exactly is the threat, nor does it allow me to take any action. In addition, the threat history shows empty list. 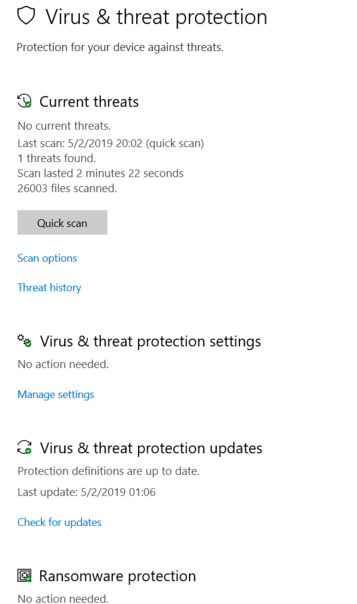 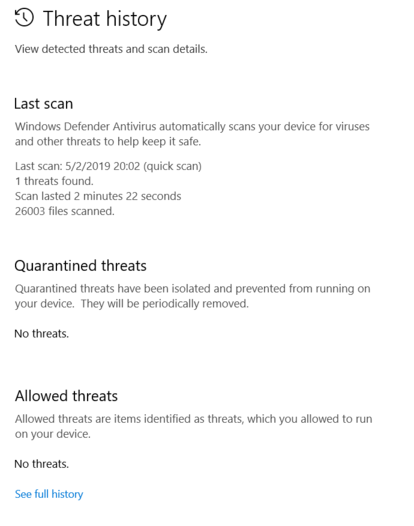 windows-10 security virus windows-defender
share|improve this question
edited May 2 '19 at 13:22

I managed to resolve a similar issue, even I am not sure if this is your case too. This is caused by installing a software called Ali wangwang which is developed by Alibaba. A lot of Chinese users have this issue but they don't have a solution. Even uninstalled this software, the problem persists.

I set up a virtual machine and compared the registries before and after installing Ali Wangwang. The software made a number of modifications to the registry, but I noticed that there are one hash code which also appeared in the logs of windows defender(MPLog). I removed the the key with that hash code and the problem is gone! Computer\HKEY_LOCAL_MACHINE\SOFTWARE\Microsoft\SystemCertificates\ROOT\Certificates\65439929B67973EB192D6FF243E6767ADF0834E4

This seems to be a certificate issued by Symantec, named Sysmantec Time Stamping Service Signer. I don't understand why this is causing the problem, and I am also not sure if I just "skipped" some scan which is supposed to be conducted? If someone knows about it, please share, thanks!

One thing for sure, there is no registry key like this on another PC or a new setup VM with Windows 10.

Not the answer you're looking for? Browse other questions tagged windows-10 security virus windows-defender or ask your own question.