Now what's odd about this is that I have to save my credentials for three different purposes directly related to DavMail. 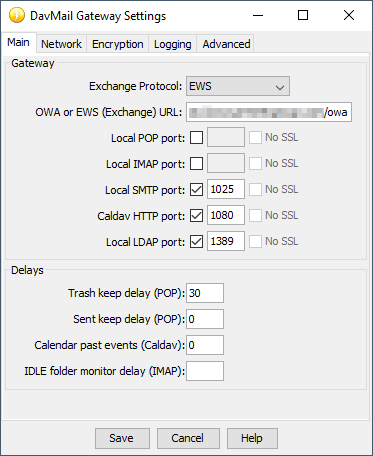 IMAP is fortunately available to access the mailbox without the help of DavMail.

Now Thunderbird manages to save all of the above and I can see them saved in the password manager (Tools -> Options -> Security -> Passwords tab -> Saved Passwords). 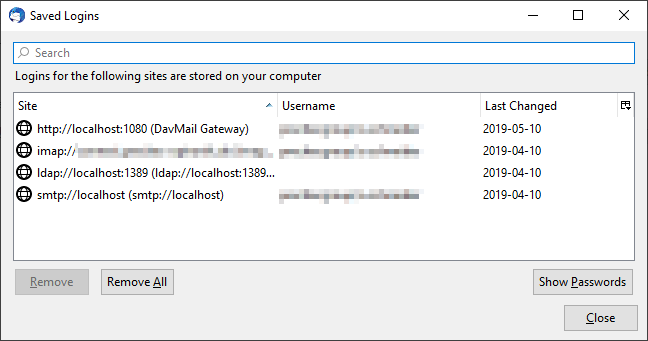 The screenshot already nicely illustrates the issue by way of the Last Changed column. I am being prompted for the password of localhost:1080 all the time, whereas all the others persist and work fine (i.e. the services also work as expected).

Now, initially I thought the reason for this behavior was that I am using Scheduled Tasks to start both DavMail and Thunderbird. Both are individual tasks triggered by a logon of my user account with a 10 second delay for DavMail and a 60 second delay for Thunderbird. In theory that should take care of certain dependencies not being up, although localhost should really always be available - and early on.

However, I can rule out that scenario, because even if I close both DavMail and Thunderbird, then start DavMail, followed by a check that the services it provides run on the given ports (only with netstat, though), and then starting up Thunderbird again gives me the exact same prompt and only ever for localhost:1080.

NB: another observation I made is that when I enter the password at the prompt and forget to set the checkbox as shown, the next time around Thunderbird will prompt not just for the password but will also have forgotten the username (which is given in ad-domain\username notation).

I found a solution to this problem, which I also had on Ubuntu 19.04.

and voila - it works.

Not the answer you're looking for? Browse other questions tagged thunderbird exchange authentication password-management caldav or ask your own question.

4
Why does my Firefox authentication popup only offer one username/password combination?
5
How can I make the Firefox Password Manager more intelligent?
0
How do I change the password for an NNTP server in Thunderbird?
1
How to place Firefox/Thunderbird password manager files on TrueCrypt volume?
2
How to use 2 CalDAV calenders (same provider) in Thunderbird (either one works, but not in parallel)
0
How do I add a site to an existing LastPass password from that site?