This is strange issue I have observed. I installed Active Python 2.7 on Windows 10 (version 1903).

On typing “python” from search, opens the Python 2.7 prompt but when I type from command prompt window, it triggers the Microsoft Store.

Don't know how to fix it and this never happened on previous versions of Windows (RS5, RS4…)

Edit 2: Please suggest the solution to turn this off: either via command prompt or using answer file to get this after unattended installation.

Fixed it by removing it automatically on the settings page. Under Apps and Features, there are an application execution aliases. 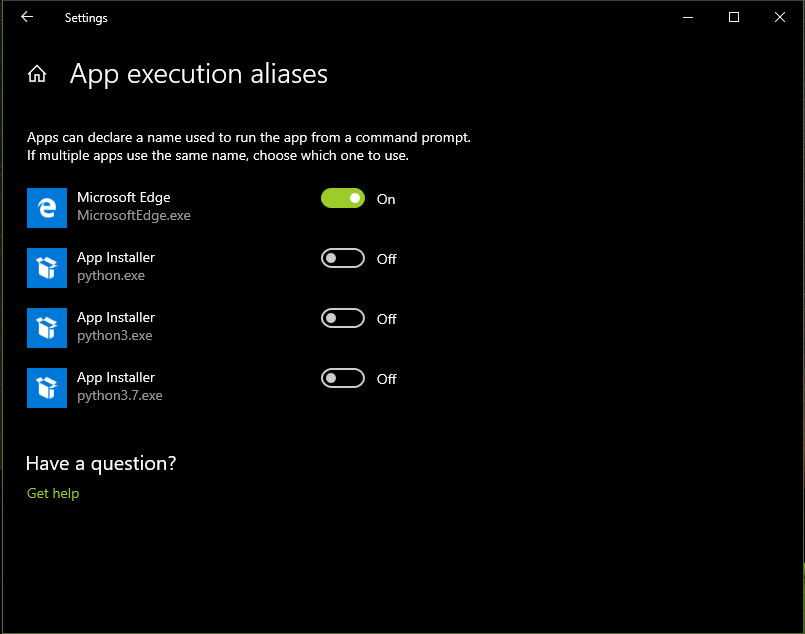 Deleting "C:\Users\Username\AppData\Local\Microsoft\WindowsApps\" from the system environment variable, PATH, prevented the Microsoft Store application from launching when I typed python.exe and python3.exe in a command prompt. 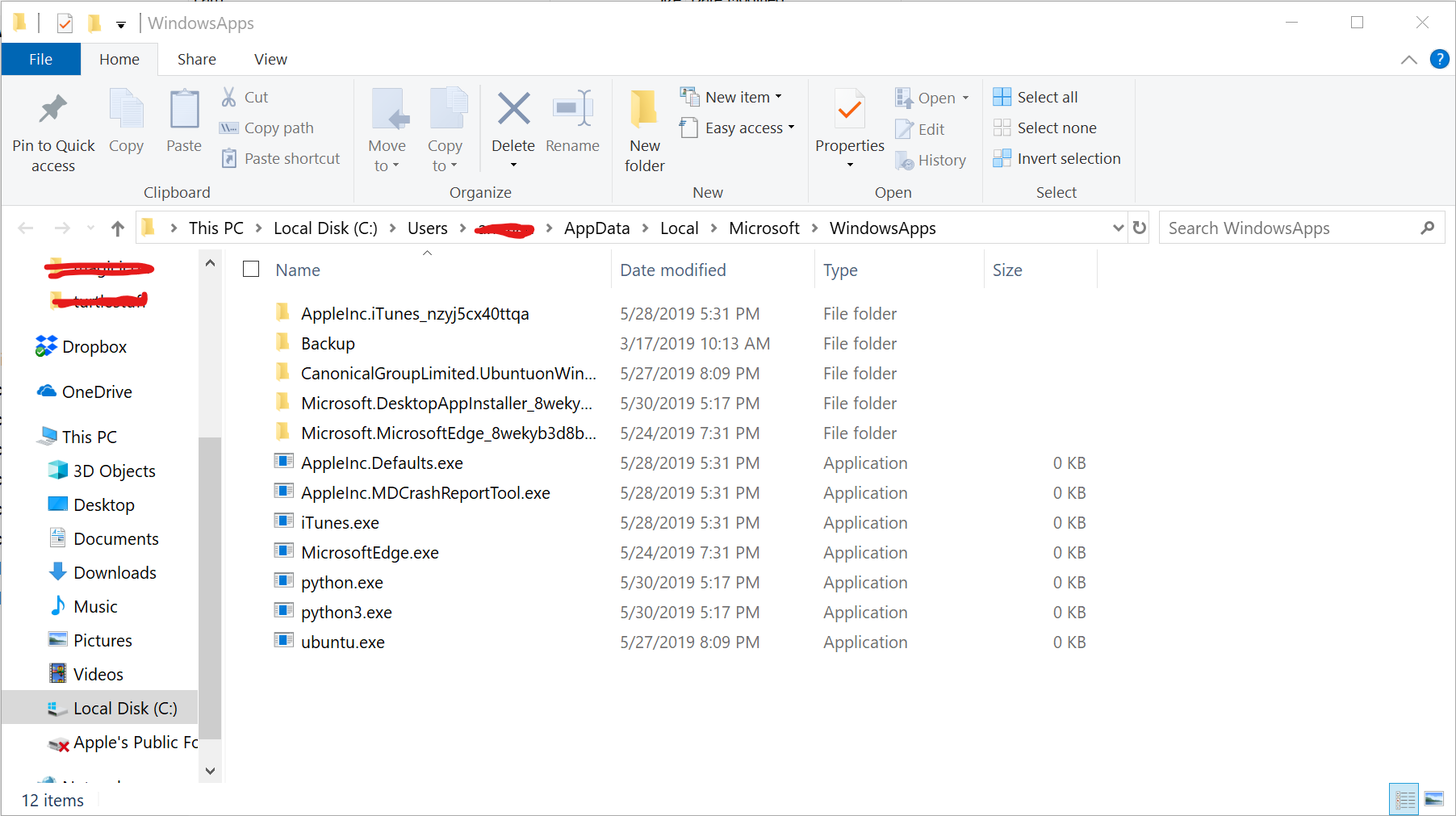 These executables are built for the user's convenience and are not necessary tools for Windows to work.

As @Ramhound mentioned in a previous answer, this is an intentional change as announced in the article: Who put Python in the Windows 10 May 2019 Update?

The article describes the team's intent to make the process easiest for users new to Python:

If you’re already a Python expert with complex needs, you probably know how to install and use it. It’s much more likely that someone will hit this problem the first time they are trying to use Python. Many of the teachers we spoke to confirmed this hypothesis – students encounter this far more often than experienced developers.

So we made things easier.

I could not find a full list of features from 1903 on the microsoft site, but PureInfoTech provides a great comprehensive list of the new features

Not mentioned in the article, it also accompanies some new layout changes and features updates, such as in the Apps & Features in settings:

In settings, select Apps & Features, then you should see a new option 'App execution aliases' which will have python.exe and python3.exe

Turning the switch for each App execution alias either deletes or replaces that alias in the directory: <user dir>\appdata\local\microsoft\windowsapps It's also worth noting that if you have the update and python.exe or any of the aliases don't work for you, you may have to turn them off and on again, which I was able to do when python.exe was not available after the update.

Below worked for me:

On typing python from Search, opens the python 2.7 prompt but when I type from command prompt window, it triggers Microsoft Store.

Don't know how to fix it. This never happened on previous versions of windows (RS5, RS4...)

This is intended behavior on Windows 10 version 1903. There isn’t anything to fix.

While Python continues to remain completely independent from the operating system, every install of Windows will include python and python3 commands that take you directly to the Python store page. We believe that the Microsoft Store package is perfect for users starting out with Python, and given our experience with and participation in the Python community we are pleased to endorse it as the default choice.

I'm posting this in addition to the other answers in case anyone else encounters this frustration to the extent that I did.

I had Python 3 in my PATH before the 1903 update, and the 1903 update still added those two "rogue" python files in my WindowsApps folder. Even after removing that folder from my user PATH (it wasn't in my system PATH), and after rebooting, typing "python" in PowerShell opened the store. The WindowsApps folder was at the end of my PATH variable anyways, so it should not have overridden the working version, but it did. Get-Command python even returned the python.exe in WindowsApps.

The only way I could get it to run the version of Python I had working previously was to delete those python files from the WindowsApps folder; apparently PowerShell implicitly looks in that folder instead of using the PATH variable if those files are present.

I ran into this problem recently. With Visual Studio 2019 installed, I had already installed Python as a workload. I went to CMD and typed python. Up came the Microsoft Store. After wasting too much time looking more into this, it was obvious to me Microsoft Visual Studio team and Python team were not on the same page.

What I eventually ended up with was going back into Visual Studio installer and unchecking the Python workload to uninstall. Then, going into Windows Apps and uninstalling Python and any Python related applications listed.

After noticing that Python was installed on my 1TB NVMe SSD boot drive in the users directory I cringed. The path name was not friendly at all. Not only that, but because I have limited space on that drive and with all the Microsoft Store apps piling up, I dread to think what happens when the drive goes full.

So I decided, this was not good and chose to go to the Python website and download the current version. Then, install in a non-boot drive with plenty of disk space into a friendlier file path (D:\Python). You'll see why this is important when you go pip down a bunch of packages and applications...

You can put your python installation folder before C:\Users\<Username>\AppData\Local\Microsoft\WindowsApps\ in the Path environment variable. Such as 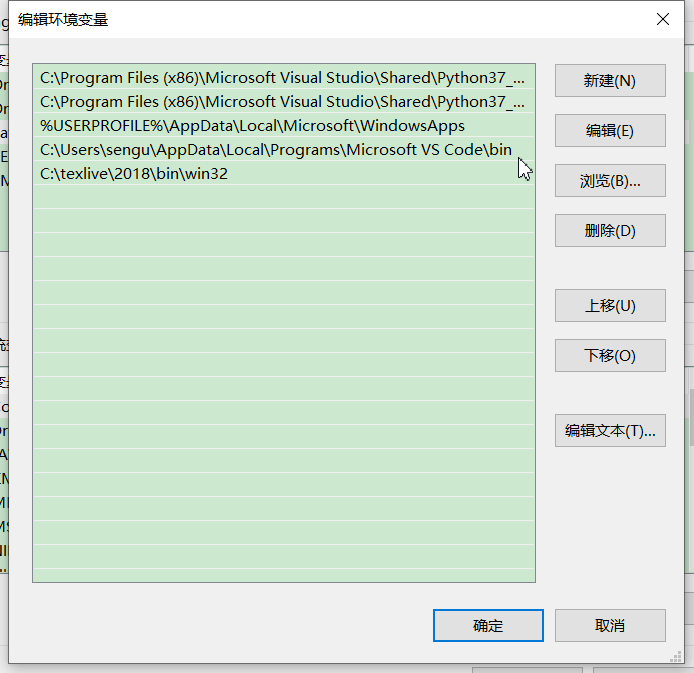 Not the answer you're looking for? Browse other questions tagged windows-10 command-line python cmd.exe unattended or ask your own question.

13
What's the AppData/Local/Microsoft/WindowsApps folder for?
0
How to stop Microsoft Store opening on file not found?
1
Remove Windows 10 Python 'App Execution Alias'
0
Python uninstillation questions: Why is there still a python.exe after uninstalling on Windows?
0
Is a 0 size python.exe present in WindowsApps problematic?
13
How to delete Windows NTFS hard link (mklink /h) while original is in use?
7
How do I alias python3 on Windows?
1
"python" typed in powershell does not work although it is in the PATH
0
Corrupted python.exe file
0
How to add Anacond's python to path and run it inside a given terminal
See more linked questions

1
marking text in Windows 7's command prompt
8
Python in command line runs the wrong version?
1
Why won't Cygwin run windows apps that interact with the shell/command line?
1
How do I show the return code of the previous command in the Windows command line prompt?
1
Run Python Script with Powershell by default instead of Cmd (Windows 10)
1
Installed Python, but cannot run `pip`