I can get to the display setting where I can re-order displays: 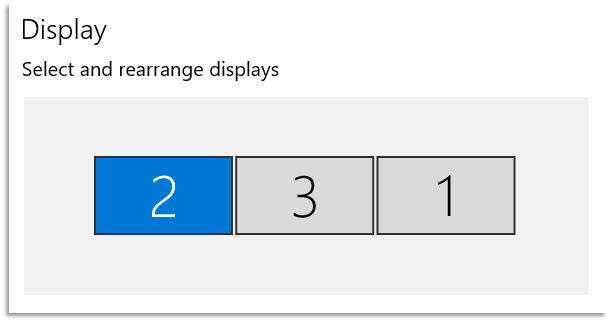 But is it possible to actually re-number them as well?

The reason simply re-ordering doesn't fit my use case, is because other applications, like Skype, will use the original numbers and locations, which leads to some counterintuitive selections

All of these threads just suggest using display settings to shuffle monitors around:

Even if the cables are switched Windows 10 will unfortunately still remember the monitor numbers as it looks like it's using some monitor hardware identifier to attach the identity number. The only way I could find to change the monitor identities was the following.

Shut down the machine, connect only the first monitor to the dock (or the machine) and switch the machine on. The monitor will be identified and added as monitor 1 back into the registry. Proceed to connect what you would like to be monitor 2 (and 3 and so forth) and they should be numbered properly.

This procedure was inspired from this page

The numbering for monitors identity depends on which port of your computer's graphics card the monitor is plugged into. For example, the port that monitor #1 is connected-to will always be #1.

The only solution for changing identities is to swap the monitors, meaning connect them to different ports.

For my Win10 desktop, I used the REGEDIT solution above. After a clean install of Win10, I had a test monitor plugged into plug 2 of my graphics card, since is my HDMI native connection.

The monitor I wanted as #1 AFTER my original testing, needed a Displayport to HDMI converter. When I plugged that one in, it would also be seen as Display 2 in Win10.

Rather than delete the following entries, I just renamed them:

(In my case I renamed to ...ConfigurationOriginal, and ...ConnectivityOriginal just to make it easy to revert if needed.)

I turned off the machine, unplugged everything but what I wanted as Monitor 1, restarted and it booted to Monitor 1.

While in Windows, I had the Display page opened, plugged in Monitor 2, then Monitor 3 and they came up and numbered exactly in the order I wanted.

Now my monitors match the connections in the back of my graphics card, going from one to three, from left to right.

I also looked at the new keys via Regedit, and Windows recreated "Configuration" and "Connectivity" and now has the three monitors I'm using.

Worked the first time, took less time than writing this THANK YOU message to triadiktyo for posting a working solution.

Monitors identified correctly, in the right order, everything works as expected.

Unfortunately, I do not think it is possible to change the monitor identities. You can move the monitors around, and change the primary display. Depending on how the monitors are arranged, it may be possible to set the main monitor and then move the other 2, so they match the arrangement. The main display is the only thing you can change. Here is an article I found dealing with this: https://www.tenforums.com/tutorials/3871-change-main-display-windows-10-a.html I am not so sure, but depending on what you use for graphics, you may be able to go into the control panel for the graphics, (Usually you can right click on the desktop and it will say: "NVIDIA Control Panel" or "Intel Graphics Settings" depending on what you use for graphics processing.

6
How does windows decide which monitor to display a window on and how can I control it?
1
How can I set a dual-display, single-background when my primary display is on the right?
1
Windows 7, Ignore second plugged in monitor/display.
3
How to fix "The display settings could not be saved" message with Oculus Rift
24
Separate custom scaling levels for each display in Windows 10
0
Rotate one monitor using Intel Collage
1
Windows 10 needs monitors on always
0
Win7: change monitor identities