"Graphic card error(nvidia-smi prints "ERR!" on FAN and Usage)" and processes are not killed and gpu not being reset

I have a problem using a GPU in ubuntu server. Nvidia-smi prints

"ERR!!" on FAN and Usage, GPU not being reset, processes are not killed 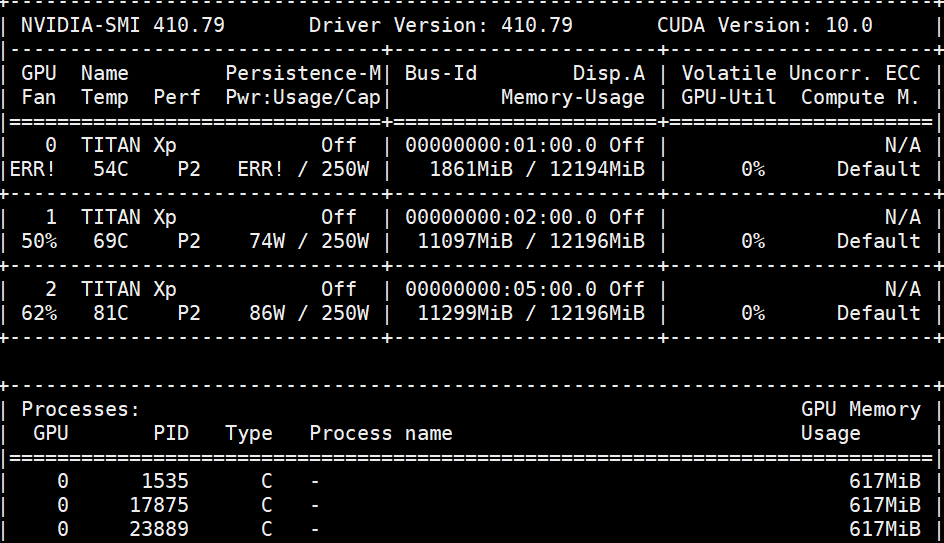 When I googled the problem, I found that I could reset GPU or kill the processes that use that GPU.

After that, there are not any more Zombie processes when I searched.

But those three processes were not still removed.

and I found the problem on Google, and the answer was to kill processes running on that GPU. First problem again!

(I am not used to using GPU. is it a not a good way to run multiple codes on one same GPU? )

I meet the GPU problems, one of which is as same as yours. It seems that Google has no enough resources for GPU Fan ERR! I has spend my time to figure out the following solutions. Most of time they work out, but depends on the GPU status including CUDA Driver,Hardware FAN and PCle Power Cable(probably).

The easiest way is to reboot your system for returning to the normal status. For instance, I reboot my Ubuntu 18.04 as follows.

2.The Solution in the state of the idle GPU

If your GPU Graphics Memory has not occupied with any Deep Learning application, for instance: no the usage amount such as 2100 MiB / 7981 MiB, you can use the following composite commands to solve the GPU Fan Error.

The commands will work out and GPU will go back to the normal status most of the times.

3.The solution in the state of zombie GPU processes

If your Deep Leaning application is completed(or ended) and the GPU was still occupied with zombie processes(or other reasons), the above-mentioned commands could not work out. In this condition, you can solve the issues by inputting the following commands.

My test scenario for the above commands is described as follows.

A. After the single reboot command such as "sudo reboot" is given, the GPU does not work actually. But it is necessary to clear your system.

B. Following A, the above-mentioned composite commands are given, then the GPU works out.

Not the answer you're looking for? Browse other questions tagged linux graphics-card gpu nvidia-graphics-card process or ask your own question.

2
How to get maximum CUDA performance from laptop GPU
0
Nvidia GTX 760 and 960 fan always loud on Windows 10
0
New RTX 2060 GPU stop working after spark came while plugging in HDMI from PC to TV
0
(Ubuntu 18.04) Tensorflow with GPU Support but the gpu is only capable of compute capability 3.0