Why does Windows 7 always automatically change the input or keyboard language?

I am wondering why Windows 7 always automatically changes my input or keyboard language.

I've a notebook with an integrated QWERTY keyboard English (United States). Traveling, I use that one but, additionally, I've my own as well as a much better keyboard at home which is a QWERTZ keyboard German (Germany). Thus, being at home, I'd like to use my QWERTZ keyboard.

Why doesn't Windows 7 stay with one input language if I changed it manually by pressing ALT + Left Shift? Why doesn't the manual change of the input or keyboard language apply for the whole Windows 7? Why does it only affect the currently opened program?

Since I've two keyboards with two different layouts, I seriously need to have both of the keyboards languages installed.

I tried both of the below settings in order to find a solution for my problem. Currently, I am using the first option, two input languages. 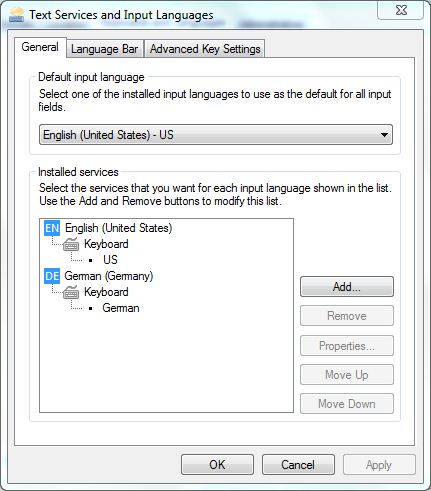 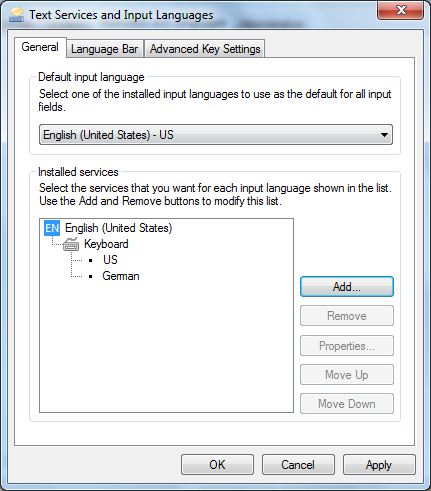 Googling the problem, I came across the following article written by Androgen Belkin: http://www.script-coding.info/AutoHotkey/AhkRussianEng.html

He explains that Russians always have a similar problem with their keyboards concerning the Russian and English language. Thus, he created a script that checks and switches on user input, if necessary, the default input language when Windows starts. The script can be found on the above link at the very bottom and has been written for AutoHotKey, a free keyboard macro program. Luckily, I am a devoted AutoHotKey user myself.

Furthermore, AutoHotKey supports compiling scripts into single executables. I don't want to withhold my script from everybody to whom it is as useful as to me.

When opening a new program, Windows seems to always use the default input language.

The default language can be changed in the General tab of Text Services and Input Languages screen.

I answered this in a separate question, you probably want Keyla.

I found and answer here and it worked for me.

It should show you there that it has changed.

I think here is the solution:(Windows 8)

Essentially all you need to do is Go to Control Panel\Clock -> Language -> Region\Language\Advanced settings and check the Let me set a different input method for each app window checkbox.

Not the answer you're looking for? Browse other questions tagged windows-7 keyboard-layout input-languages or ask your own question.

39
How to switch the KeyboardLayout for all Application at once
11
How, in Windows 10, do I have two keyboards each of which automatically uses a separate input language?