Windows 10 Shut Down dialog: switch default option from 'Switch user' back to 'Shut down'

Since about two weeks, pressing Alt-F4 on the desktop no long offers 'Shut down' as the default action. Instead, it shows 'Switch user' on top: 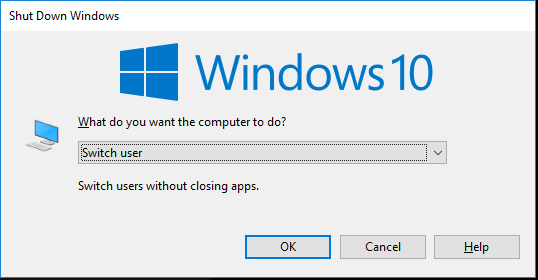 So I can no longer just press Alt-F4 and press return, which is annoying.

Strangely, it also always shows 'Update and restart' in the option dropdown, even when no updates are scheduled: 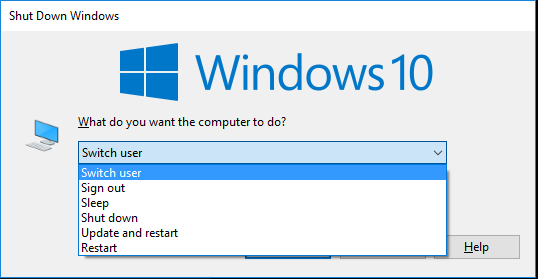 Now that I think about it, I wonder why it doesn't offer 'Hiberate' as an option, because I do have that enabled. So clearly, that dialog somehow got messed up.

I already found this article that shows a registry hack to revert the default action back to 'Shut Down', but it has no effect. I also tried choosing that 'Update and restart' option to see whether it would disappear, but it does not -- and in any case, 'Switch user' is still on top and default.

What might be causing this and how can I fix it?

Browse other questions tagged windows-10 shutdown dialog or ask your own question.

21
How to shut down the computer without the update on Windows 7?
0
Windows 7 does not shut down, only hibernates
2
Windows 8 doesn't shut down
2
Windows 8.1 freezes on EVERY restart OR shut down
66
With Windows 10 how can I shut down without installing updates?
9
Why does Windows 10 “Update and shut down” not complete the update?
3
How to change the default setting of the Shut Down Windows dialog (Alt-F4)?
0
Will available Win10 updates occur when power button is pressed?