Microsoft Word - Is it possible to create two separate lists (one bullet point, one numbered) at the same indent level?

Is this an issue with the new version of Word? I could have sworn it was possible in the past. I tried scouring the internet for solutions but haven't had any luck.

Note: When the indented list items are changed to (a, b, c) Word formats them as (2. a. b. c.) and (4. a. b. c.) as it should. Word knows that they are separate lists, but it will not allow separate formatting?

Is it possible to break the link between the lists and have bullet points for one list and numbers/letters for the other?

What you are looking for is a multilevel list. See this support page which explains exactly how to do it and customize it. It says it applies from office 365 all the way to word 2007.

The following is how to define a new multilevel list: 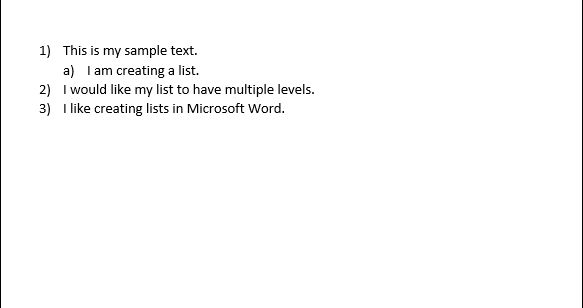 Look into working with styles.

Styles contain all of the formatting for paragraph, characters tab/indent ect. You can apply paragraph styles to a whole document and within that style apply additional styles to just a sentence, list, link ect.

Put the cursor in the list and view the styles panel. Then edit the tab/indent measurements. If you have a list within a list and want say half the indented measurements you will have to repeat the process creating a new style for the sub list.

You can save styles that you made to use on other documents and you can import styles from other documents. If you use the same structure and styles very often you may even create templates with the styles already applied.

Your problem relates to using a multilevel list. A multilevel list pre-defines the style for each level, which is what underlies the problem you're seeing. When you change the style in one section of the outline, it gets applied to all instances of that style. I believe there are two approaches to solving this.

The difference between these two approaches is that in #2, everything remains compliant with the multilevel list definitions, which makes it easier to maintain the document. You define the list structure and then use it where needed. It doesn't involve creating exceptions, and if you need to modify the document, finding all of the exceptions everywhere and changing them consistently. This is the whole concept behind using styles.

There is a lot of detail and images for these settings at Word 2007: Taming multilevel list numbering. That article is a little dated, but the detail should still generally apply to more recent versions.

If it's OK to have the bullets and lower case letters on different tiers, you can easily modify this to show what you want.

Apply the Multilevel List you want to use and then choose Adjust List Indents (right click onto any of your heading numbers) to modify the third tier.

Define the third tier to match the settings of the second tier except with whatever type of bullet point you want instead of a letter heading ('Number style for this level' drop-down). In the document, demote any second tier line to the third tier and it will look like your example above.

This method will work for the entire document you edit and remain consistent throughout. You can also save the list for future use by choosing 'Define New List Style' under the Home/Paragraph/Multilevel List drop-down and giving it a name.

Not the answer you're looking for? Browse other questions tagged microsoft-word office365 microsoft-office-2016 autoindent bullets or ask your own question.

4
How to have two headings at the same “level” in a multilevel list?
24
Microsoft Word - When I hit tab, it no longer indents the bullet-point in a list
2
How to get consistent indenting of multiple levels of bullets in Microsoft Word 2000?
2
Is it possible to set up separate Multilevel lists in Word?
2
How do you create 2 separate Numbered Lists within the same document? (Word 2016)
0
Word 2013: Bullets don't appear when creating bullet list
4
Why is my bullet formatting reset after changing a single bullet in Microsoft Word?