How does the Asus Pen work, technically?

I've received the Asus Pen for use with my Asus computer.

First, note the official Asus page about the pen says the battery supplied is rechargeable, but it isn't. Asus Customer Support has confirmed, the spec has changed, and the webpage is out of date.

HowToGeek has an article about stylus technologies that lists three kinds:

The Wacom one sounded good, so I bought a Wacom Bamboo Ink. Then I found out two things. First, it operates by using bluetooth. Second, it's not compatible with my computer, and Asus has their own pen that is. (Neither Asus nor BestBuy told me that when I bought the computer.) Fortunately, purchased through eBay, it was returnable.

So, I got the Asus Pen, and the instructions for it are useless. The instruction sheet that comes with the pen has the same content as the online FAQ page. It says something about the buttons, how to install the battery, and how to replace the nib. Nothing about how to turn the darn thing on or about how to establish communications with the computer. I figured it can't be just capacitive since it has a battery.

Huh? So, okay, I put the pen up towards the screen, and lo and behold, before it touches, a tiny circle appears on the screen, which moves around as I move the pen without touching the screen. Bluetooth on my computer is turned off, so it's not using that. There must be some kind of electrostatic or electromagnetic communication between the pen and something inside the screen that only requires proximity, not contact. Basically, that circle is a cursor for the pen. If I touch the pen to the screen, I can draw with it, and if I press one of the buttons, I get a right-click menu. If I press the other (erase) button and touch a line that I drew, the whole contiguous line disappears. None of this is explained in the instructions. But anyway, the pen is working, and my question is, how?

As for the HowToGeek article, I see that the Wacom pen I bought operates by bluetooth, so I wonder if the Asus Pen is operating by the unexplained technology that the article called "Wacom."

So, can someone say how the Asus Pen works, or better yet, post a link to a technical article on how it works?

EDIT: The answer from RamHound says the pen is working via bluetooth. Here is the reason I say bluetooth is not on. The following screen image is from "Windows > Settings > Devices": 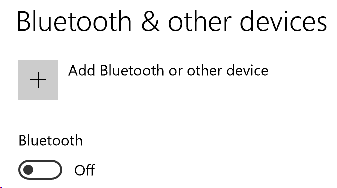 The pen is operating with this setting. That's why I'm pretty sure it's NOT operating via bluetooth. Can I be wrong about that?

So, can someone say how the Asus Pen works,

The pen does indeed work through Bluetooth (the buttons on it are programmed to specific actions), if your Bluetooth was enabled, the buttons like the eraser would work.

There are only two pen technologies Wacom and N-Trig (owned by Microsoft). There are no other active pens on the market.

Based on the 1024 levels of sensitivity the ASUS pen supports the technology behind it is N-Trig. Which means the pen is an ASUS branded N-Trig (active) pen.

There must be some kind of electrostatic or electromagnetic communication between the pen and something inside the screen that only requires proximity, not contact.

The communication is done through the touch screen on your device.

or better yet, post a link to a technical article on how it works?

The instruction sheet that comes with the pen has the same content as the online FAQ page.

It’s supposed to be that easy. Since Microsoft acquired N-Trig the only documentation that exists is either through ASUS or Microsoft (I.e for Surface Pen).

But anyway, the pen is working, and my question is, how?

Willing to bet that BT is actually enabled.

As for the HowToGeek article, I see that the Wacom pen I bought operates by bluetooth, so I wonder if the Asus Pen is operating by the unexplained technology that the article called "Wacom."

Wacom does not have a pen with 1024 levels of sensitivity on the market to my knowledge.

ASUS pen also looks identical to that of the Surface pen.

Not the answer you're looking for? Browse other questions tagged asus-laptop stylus or ask your own question.

1
Resolution is being stupid. Help me?
1
ASUS S400CA BIOS Upgrade-RAM doesn't work anymore
1
How do active stylii work on touchscreen displays?
1
Does the negative end of a battery works better than a capacitive stylus because of electric charge?
1
Why does my Surface Pro 4 write as if the ink was running out?
2
Wacom Intuos pen drawing while hovering?
0
How Does Universal Active Styluses Work?