After that, close and reopen all your RDP sessions on your client computer to restart the Remote Desktop Client (mstsc.exe, aka Microsoft Terminal Services Client) application.

Follow-up: I am not sure, but it looks like fixed in 21H1 (both client and server must run 21H1 or higher). For me I no longer see freezes without the disable UDP workaround. 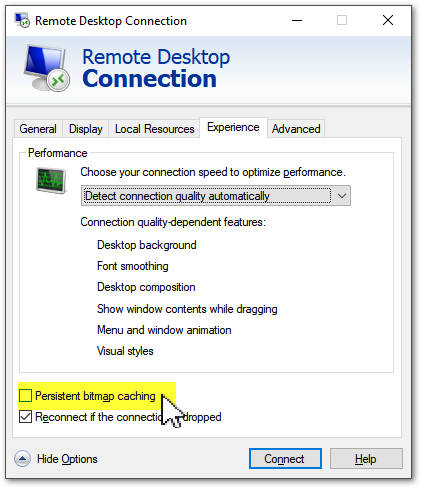 Update: This isn't a complete fix. The freezing happens less often but still happens. I can trigger the freezing semi-"reliably" by copying dozens to hundreds of rows in Excel. Appears to be sensitive to size of the selection (smaller is less likely to freeze). Disabling clipboard under Local Resources doesn't seem to matter.

I ran across an issue with the same symptoms and tried all the UDP gymnastics on this thread to no avail. I set them all back to defaults. Turns out Windows 10 RDP has an issue when one of the host's monitors is vertically oriented while the client does not have a vertical monitor. If the vertical monitor is disabled, RDP works like a champ. v1903

I turned off all local resources I didn't strictly need, such as audio input and output, and video input (webcam), and mine is working better, still on UDP.