I remember hearing of some software that would take a screen print every 15 minutes and store it in a file. They mentioned it can be used to keep track of the amount of time you spent on a project.

I know of SnagIt. http://www.techsmith.com/screen-capture.asp

What are some of the other packages out there?

TimeSnapper runs in the background of your computer, taking screenshots of your desktop every few seconds all week long.

Where did all my time go?TimeSnapper lets you play back your week just like a movie. You can play it at any speed you like, and jump in at any time you like.

When it's time to fill out that dreaded timesheet, TimeSnapper is a savior. No need to tear your hair out trying to remember where all the time went.

You haven't specified operating system so on linux I'd add this to my crontab: 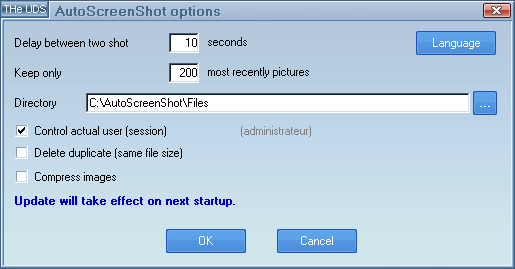 One of the so many software that can do that.

TimeSnapper and Irfanview are nice, but they are missing a key feature: stop capturing when the computer is locked. It's pretty annoying to have thousands of screenshots of "Press Ctrl+Alt+Del to login". Using the free nircmd tool from Task Scheduler can resolve that. You need to create two tasks:

It's not perfect because if you have NirCmd running in the background for other reasons, the "Stop on Unlock" task might kill it instead, but I reckon this won't be the case for the vast majority of users.

REFOG is one that is free, and it has the ability to record anything else

Not the answer you're looking for? Browse other questions tagged screenshot screen-capture or ask your own question.

1
To just press a key and save a screen snapshot to the hard drive, we must use 3rd party software?
2
Print Screen key going to black and white
15
How does the Print Screen key work?
0
Program that saves image to desktop when pressing prntscrn
1
Why does print screen not work for full screen applications in windows 8.1?
1
How to take screenshots of a part of the screen that I've selected, every few seconds (Windows or Linux)
1
Snipping Tool saves screen shots to random temp folder - how is this useful and how can it be changed?