I have a hard disk that I scanned with TechTool and it reports one bad block. As far as I can tell, TechTool only scans and reports a failure. It doesn't fix anything.

Back in the day, Norton Disk Doctor did the job of scanning and flagging (remapping) bad blocks on the Mac. Today we have various tools for fixing up HFS+ directory errors (Disk Utility, fsck, DiskWarrior, TechTool), but I don't know of any tool that will do a surface scan and fix the bad blocks too.

What software is available for this?

If I know the address of the bad block, is there a low-level terminal utility for marking it?

I don't know of any tool that will do a surface scan and fix the bad blocks too.

What type of a Mac and what type of hard drive are you having problems with?

I doubt you will find any software tools to "fix" bad blocks, at least for recent hardware. I don't know when it started but some time back the ability to remap a bad sector was merged into the firmware of the hard drive.

If you look at the S.M.A.R.T. registers for your drive with a tool like SMARTReporter, you should see an entry with ID number 05 and title "Reallocated Sectors Count". This is the number of bad sector's which the drive has remapped.

Perhaps Disk Warrior's "Bad Block" is referring to something else? (I couldn't guess what that might be though).

SMARTReporter appears to be a rather "quirky" utility. You can in fact query & display the contents of a drive's S.M.A.R.T. registers, you just have to jump through unexpected hoops to do it.

In the SMARTReporter FAQ you can find this tidbit:
Can SMARTReporter tell me exactly which S.M.A.R.T. test is failing?
Yes, starting with version 2.4.5! Right-click the drive in the drive-list in the preferences window and select "Check S.M.A.R.T. attributes".

Another SMARTReporter quirk is that cut'n paste apparently only works in these display windows when you use the menu bar entries. The keyboard shortcuts & mouse "right-click" context window won't do it. On the other hand, SMARTReporter IS free. ;-)

Curiously, SMART Utility calls the drive "Failing" when all other utilities show it as "Verified". It shows 1 Pending Bad Sectors. So, how do you change a "pending" bad sector to a "removed" or "reallocated" one?

My understanding is that you would not do it. The drive's firmware is supposed to do it automagically on its own. Note what it says in the table in the Wikipedia S.M.A.R.T. article.

So if the above is true then apparently the Pending Sector Count needs to be interpreted cautiously. The sector read error most likely occured during the disk scan you did earlier with TechTool. (BTW, do you mean TechTool Deluxe 3.1.3?) Since TechTool probably didn't try to write the sector, it was not (yet) reallocated.

Can that be done without a reformat?

I think a "reformat" would only accomplish something if the format wrote to every sector on the drive. I do not know whether a standard (non-secure) erase with Disk Utility ... which is what I believe you mean by a reformat in the context of a MAC ... would accomplish this.

If you did this it would be a very time consuming task. I recently did something like this with a 500GB laptop drive and it took a tad under 2 1/2 hours to complete. Of course, you'd have to add in the time to (hopefully) restore your system from your (hopefully trustworthy) backup.

It is not clear to me that there is a need for you to attempt to actively force this to be "corrected". Supposedly the drive's firmware should handle this on it's own the next time there is an attempt to write to bad sector. Also, it seems likely to me that the offending sector is not currently being used as part of any file. TechTool just "stumbled across" it while scanning all sectors of your drive.

But if you wanted to attempt to force a correction then I guess you'd have to do something which would force a write to that sector. It doesn't seem worth the effort though. I would just continue to back up your files and keep an eye on your drive in case it starts to degrade further.

If you're seeing bad blocks when you run a filesystem integrity check, the hard drive has most likely already exceeded the number of blocks it can remap, and has exhausted its "spare" sectors. You should backup your data immediately (if you haven't already) and replace the drive before the problem gets worse and you lose your data.

If the SMART diagnostics are reporting no reallocated sectors (or if the VALUE column for "Reallocated Sector Count" is still well below THRESHOLD), there is an easy way to perform a surface scan and remap the bad blocks at the same time. (Note: make sure to backup your data first!)

The easiest way to force the drive to do its own bad block remapping is to boot from an Ubuntu Live CD, then open a terminal and run this command:

This will do a non-destructive random read-write test on the first drive, remapping bad sectors along the way.

If you have more than one hard drive, you can replace /dev/sda with /dev/sdX, where X is lowercase letter. You can get a list of all hard disks (/dev/sdX devices) by typing this command:

Since you're using Mac OS X, which is based on BSD, you might also want to read up on badsect and bad144, which are the built-in BSD command-line utilities for dealing with bad blocks.

My experience with SpinRite from grc.com has been very positive. I've managed to recover at least 4 disks that have failed every other attempt to repair them. The only downside is that it requires a BIOS-based machine, meaning it won't work on modern EFI-based Macs. The good thing is that just about any other p.o.c. PC will run it, from floppy, CD, or flash drive. I've not found anything else that comes close in terms of actually inspecting the contents of individual sectors and recovering the data in what every other utility discards as a bad block.

The OS X builtin command fsck_hfs has an option -S that apparently will scan and rectify bad blocks on a hard disk on OS X.

-S Cause fsck_hfs to scan the entire device looking for I/O errors. It will attempt to map the blocks with errors to names, similar to the -B option.

It seems to be doing that when run on a a disk without bad blocks but I've yet to check/document what it does when there are bad blocks.

Warning: fsck_apfs cannot do this; while it also has a -S option, it does NOT cause a scan; it does something else entirely.

It's bit of an old question, but still valid. What worked for me is the following:

This identifies the bad blocks and marks them as such so the won't be used again. As mentioned earlier, errors will only show up when trying to WRITE to it. By writing 0's, you do just that.

I can imagine this can be very time-consuming, especially if there are many errors and thus many files to replace. If that's the case, consider replacing the drive, it'll get worse...

I've heard good things about SpinRite from GRC, but never tried it myself.

It sounds like most drives will only reallocate a bad block on a write, so that's how all processes 'fix' bad blocks. If you're willing to reformat, lots of people talk about doing a low-level format that writes zeros (Disk Utility will do this).

The only tool on the Mac that I found that will do this is "Speed Tools". When it finds a bad block it will write a zero to the block (even if it's in a file... the thinking is that it's already bad).

Attention first to the comment by @chronos … think: dataloss. In an edge case, a fix may make recovery of data impossible.

Amongst the utilities that I have used on Macs, one is outstanding for unmistakable alerts such as this: 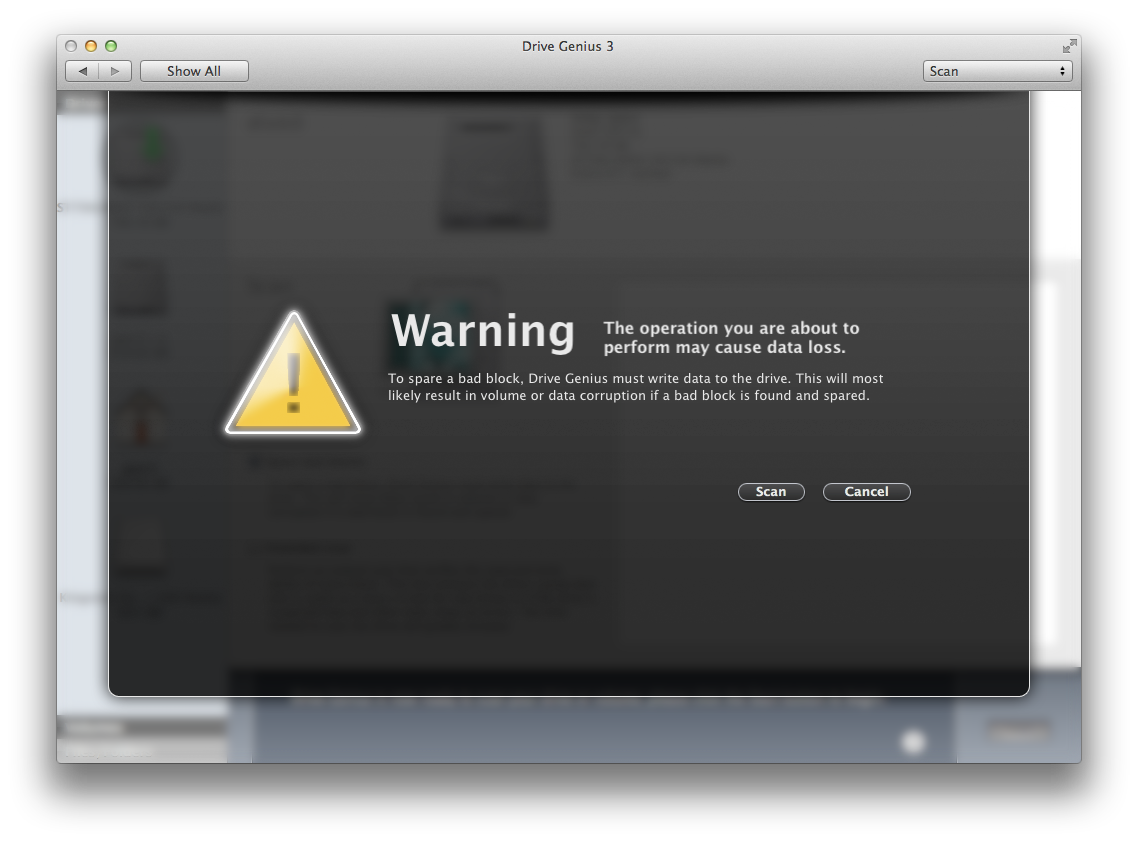 The operation you are about to perform may cause data loss.

To spare a bad block … write data to the drive. This will most likely result in volume or data corruption if a bad block is found and spared.

You can learn about such things before purchasing the product – refreshingly honest.

(To appreciate the risk of dataloss, see for example the SpinRite documentation linked from the Why care? part of my answer under How to check whether there is bad sector on a USB harddisk on OS X?)

For its unmistakable warnings, for pre-purchase satisfaction and more, this answer is my vote of confidence in:

20
How to check whether there is bad sector on an external USB hard disk on OS X?
4
External Hard Drive bad sectors recover/mark utility in linux
3
Fixing bad sectors on Apple Snow Leopard

6
Finding the file that is on a bad block on a HFS+ volume (debugfs for HFS+)
0
Hiren's Boot CD - HDD Diagnostics - EDIT S.M.A.R.T. info
0
Is it possible to mark or segregate bad blocks on HDD?
3
Can BSOD cause bad sectors on a hard drive?
0
How to know if bad block is logical or physical?
1
Detecting bad blocks/ sectors on modern (spinning) drives and script to monitor SMART info