I have a 10/100Base-T ethernet cable with PoE IEEE802.3at/af installed in my concrete walls. Unfortunately only 7 out of 8 wires are alive. Wire #6 (green) was broken during construction works and there is no way to replace the cable.

Still, I would like to connect an IP camera to this cable if that's possible.

I crimped RJ-45 connectors on both ends so that dead wire became #8 (ground). I expected that 1 ground wire could be enough to make PoE work. My naive approach didn't work. PoE requires two pairs of wires for + and - (related question https://electronics.stackexchange.com/questions/386715/why-does-poe-use-duplicate-wires-for-power).

I wonder if I can solder another wire to white #7 (ground) and crimp the cable again so that it will look like:

I found several PoE cable DIY videos and they just solder + and - wires from a power adapter to white-blue/blue (+) and white-brown/brown (-) wires of an ethernet cable. To me, that looks similar to what I want to do.

Will such scheme damage my video recorder or camera? Will it work or it's a way to make a short circuit?

Diagram of PoE injector device which does the same thing 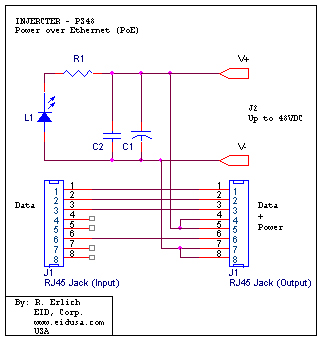 I connected the cable to my desktop PC and tested the network connection.

Looks like swapping 6 and 8 wires works fine and there is no need to swap pairs.

The only question left is + and - part of PoE

A fix can work, but not at full range. The reason is that at full range you will need all wires for power. On shorter range you can only use 2 and it is enough. You then have 2 to reallocate in case of other bad wires, like your 6th. 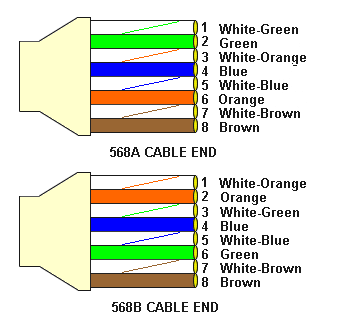 You should fix = replace the cable, simple as that. Anything else is likely to land on your feet sooner or later. While you're at it, run at least one spare cable along the replacement.

As an explicitly not recommended workaround, there are (usually 1000BASE-T compatible) PoE injectors that use Alternative A, the same pairs for power as 10/100 Mbit/s Ethernet data. (Most PoE switches also use Alternative A, also called endspan. PoE devices have to use whatever pairs provide power by definition.) That way, you only need two pairs of the cable in working order.

Since pin 6 is required for 10/100 you'd need to rearrange the pairs. You cannot simple swap pins since the pairs need to stay intact. So, instead of the 3-6 pair you could use 7-8. Make sure you rearrange on both sides in exactly the same way and mark the cable as damaged/makeshift.

You cannot ever ground a PoE wire, not even with Alternative B/midspan. Twisted pair Ethernet is coupled through transducers (magnetics) and the wires are generally potential-free (floating). Grounding a wire that is connected to a PSE can potentially cause several problems, including unexpected PoE shutdowns or transmission problems.

Additionally, do not solder Ethernet wires. The solder blob causes significant signal reflection and crosstalk. Always use crimping. If you must, use a splice box but note that these are non-standard and will make a deployment fail certification - you're beyond that anyway, but make the best of it.

The PoE injector in your diagram should be disposed of immediately. It's passive and not compliant with 802.3af/at/bt. 802.3 PoE uses PD detection and signatures to ensure that power is only applied to compatible devices.

Unless you have a great deal of knowledge about the process, never solder network cables. By the nature of this question, you do not have anywhere close to the required level of knowledge.

I found several PoE cable DIY videos and they just solder + and - wires from a power adapter to white-blue/blue (+) and white-brown/brown (-) wires of an ethernet cable. To me, that looks similar to what I want to do.

People making online videos may have the knowledge required to do so properly. Unfortunately many such videos are done by people like you who "think" they found a great solution and want to share it with the world without knowing why what they are proposing is a bad idea.

Not sure which videos you refer to or if you are referring to the properly (maybe you misunderstood what they were doing or I misunderstood what you are trying to pass along), but the description you provide would indicate that the videos in question are in the second video category.

I often think of these videos as the "blind leading the blind" and following their example is simply bad. Ask an expert/knowledgeable professional in the field and respect their advice.

Will such scheme damage my video recorder or camera? Will it work or it's a way to make a short circuit?

Could it be damaged? Sure. Could it short circuit? Possibly, if not likely. In any case, simply don't do it.

I crimped RJ-45 connectors on both ends so that dead wire became #8 (ground). I expected that 1 ground wire could be enough to make PoE work. My naive approach didn't work.

There is no "ground" wire in a network cable. That isn't how things work. The pairs are used as pairs for a purpose. Feel free to look into balanced-pair/differential signalling for more detail if you want more background.

Looks like swapping 6 and 8 wires works fine and there is no need to swap pairs.

Looks like you took good advice and promptly ignored it. Sure it works, but now you have split pairs and introduce a significant amount of crosstalk between the circuits (i.e. "pairs"). There are sound electrical reasons for the use of pairs and now you have violated these.

So let me say it again. Swap your damaged 3-6 pair for either the 4-5 pair or the 7-8 pair. Do not simply swap a single wire. Personally, I would then omit the old 3-6 pair and the unused 4-5/7-8 pair and only use two pair in your termination (so you have one pair terminated to 1-2 and one pair terminated to 3-6). Mark both ends of the cable as non-standard to help avoid misunderstandings/problems in the future.

Assuming your Video recorder is driving the data/PoE to the camera and it is listed as IEEE802.3at/af, then I would assume your camera is as well. Of course, my assumptions could be wrong in which case you should get standards compliant equipment.

The 802.3af amendment defined two modes of operation, mode A (end span power source) and mode B (mid span power source). The two modes of operation primarily differ in the pairs that were used to provide power with mode A using the same pairs as the data and mode B using the unused pairs on a 10/100 Mbps connection. Compliant devices to be powered by PoE must be able to accept either mode.

Since the description you provide indicates your video recorder is acting as a switch, which would be a end span power source and should be using mode A. As such you should now be fine using the two pair cable as described above.

Note: you will not be able to get 1000 Mbps or 802.3bt to work on such a cable and it will need to be replaced if you need to implement either.

That cable is twisted pair

Data wires are not individually swappable. They must be swapped as matched pairs.

I konw you're getting good data throughput, but that's not telling you the whole story. This sort of thing creates niggling gremlins that take insane amounts of time to troubleshoot. Doing it right today is cheap insurance.

For DC power, pairing does not matter.

It's unfortunate when you must deal with legacy broken wires, but sometimes a cable replacement is not practicable/fundable in the short term. Learn the lesson; in the future if you are embedding something in concrete, embed 2 PVC conduits - one for data and the other defensively so people aren't tempted to stuff mains power in the data conduit.

Most cameras support both poe mode a and poe mode b With mode A all you need to work are pins 1236 If the nvr doesnt support mode A get a cheap 5 port Poe switch - plug the camera into that and then plug the switch into the port into the back of the nvr. Bit of advice - don't use the built in switch for the cameras . They are poorly made and they burn out killing the nvr. Buy a used poe Cisco switch ( around 75) - you don't need gigabit since the cameras even 4k are only 8-12 megapixels- or cheaper if you only have a few cameras

Not the answer you're looking for? Browse other questions tagged ethernet power-over-ethernet or ask your own question.

7
How to make a Gigabit Ethernet crossover cable?
3
Ethernet with different color codes?
1
PoE injector to power wifi IP camera
0
What is the speed of 2 wire pairs to a gigabit switch?
2
Looking to wire one CAT6 ethernet cable into TWO keystone jacks
3
Convert RJ11 to ethernet cable?
0
Using a powered ethernet connection as the input to a PoE injector?
0
Ethernet Cable with red and yellow wires
0
Homemade Cat6 ethernet not working when PoE is in use