How to delete music as it's being played

I have huge old collections of music that I'd like to whittle down by listening through and deleting those I don't want to keep. Currently, my process for doing so is this:

As you can see, this is incredibly unproductive when trying to organise large collections because it requires constantly switching between the music player and the filesystem.

Is it possible to use either of these players to delete music from within the player itself, while it's being played, and then simply have it skip to the next track in the playlist/queue?

If it's not at all possible with either one of these players, is there an alternative that will let me do so?

Windows Media Player has an option to allow this. Go to Organize -> Options -> Library and check the option Delete files from computer when deleted from library 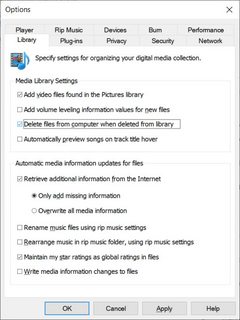 This option requires your music files to be part of Windows Media Player's library which by default means they need to be located in your user's Music folder (%UserProfile%\Music). If your music is stored elsewhere you can either move the files into your music folder, or add their location to WMP's library paths using Organize -> Manage Libraries -> Music.

With the option above enabled, you can now play your music from WMP's library and when you find a song you want to remove, just select it and press Delete. Playback will stop and the file will be deleted (to the recycle bin). To play the next song, simply press Enter. Alternatively, press CTRL+F before deleting the current song to start playing the next song, then press Delete

Note that WMP has a playlists feature that is visible as a side-bar (shown/hidden by the Play tab). This is separate from the library and unaffected by the obtion above. For the above option to work you need to select and delete the song from the library view, not the playlist view.

This method works in both Windows 7 and Windows 10.

Well, good old Winamp has this feature. You can add your whole library, browse it through Winamp, and delete files directly from it.

I think you're doing a lot of unnecessary work by running your windows maximized. Resize your Media Player and Explorer windows so both are visible at the same time and not overlapping. Some versions of Windows have a "window snapping" feature that will let you easily dock one application to the left half of your screen and another to the right side.

When both programs are on-screen at the same time, you can process a folder quickly, without even needing to touch the mouse. In the Explorer window, press Enter to play the currently-selected file in WMP. Switch back to Explorer with Alt+Tab. Delete the song with Delete, or move to the next song with Down Arrow -> Enter. Use the left hand for Alt+Tab and the right hand for Enter, Delete, and Down Arrow. I've done this sort of thing before for sorting through photos, and I very quickly got into a rhythm (yay muscle memory) that let me burn through a large collection in no time. There's still some processing overhead for each file, but you should be able to do all of that while you're listening to the current file and deciding whether to keep it or not.

If it won't let you delete a file that's still playing, you may have to start the next one and then go back and delete it.

EDIT: I no longer recommend this answer. See my other answer involving MusicBee, which combines the functionality of MPC-HC with the user experience of Windows Media Player, and then some.

I found a way to do this with MPC-HC, although I still would have preferred to have used Windows Media Player, which has advantages over MPC-HC such as music visualisations and a much more natural shuffle feature.

Disappointingly, even MPC-HC can only do this by using its playlists feature, which is enabled by opening the Playlists window pane. This is disappointing, but is so far the only way I've found to do this (incidentally, setting up a playlist is also a requirement to shuffle music in MPC-HC).

To delete files from within MPC-HC

Due to the playlist requirement of doing this in MPC-HC, I'm still open to other solutions involving MPC-HC, Windows Media Player or different music players entirely that does not require the use of playlists as a requirement. Visualisations would also be a huge bonus of any such solution.

There's an alternative hack that might work: use the sidebar to rate the songs as 1 star, then at the end, sort by stars in Explorer and delete the items with one star.

Note that you'll need to not have any one-star songs before you begin, or you'll delete them too.

Since kicken's answer to this question only seems to work on Windows 10, making me unable to test it, and since I got tired of trying to make MPC-HC work for this purpose (it does, but it's glitchy, its playlist view is plain ugly, and development on it has also been stalled for a while), I decided to spend the last 24 or so hours looking for and experimenting with an alternative music player.

I quickly realised I was no longer looking for just a music player - whereas previously I'd used my music player almost exclusively to listen to music, it was now overdue for me to move with the times and start using something that had more powerful music organisation abilities.

A much better alternative

I began by looking into foobar2000 and Clementine, based on recommendations from answers to this question and elsewhere, and although I found both okay, both were still lacking in comparison to the solution I tried last.

MusicBee is something I've been looking for for a long time without realising it - a modern music player and manager with an interface and user experience as beautiful as it is powerful. Ironically, I'd already had it installed because I'd checked it when last running Ninite, but I'd never started it up or thought to use it as my regular music player.

The one thing it is missing is a context menu item to add files in a folder to the Library, which I found odd, but clicking the Menu, Add Files to Library, and then navigating to the Playlists tab gives me the view of my files that I need: 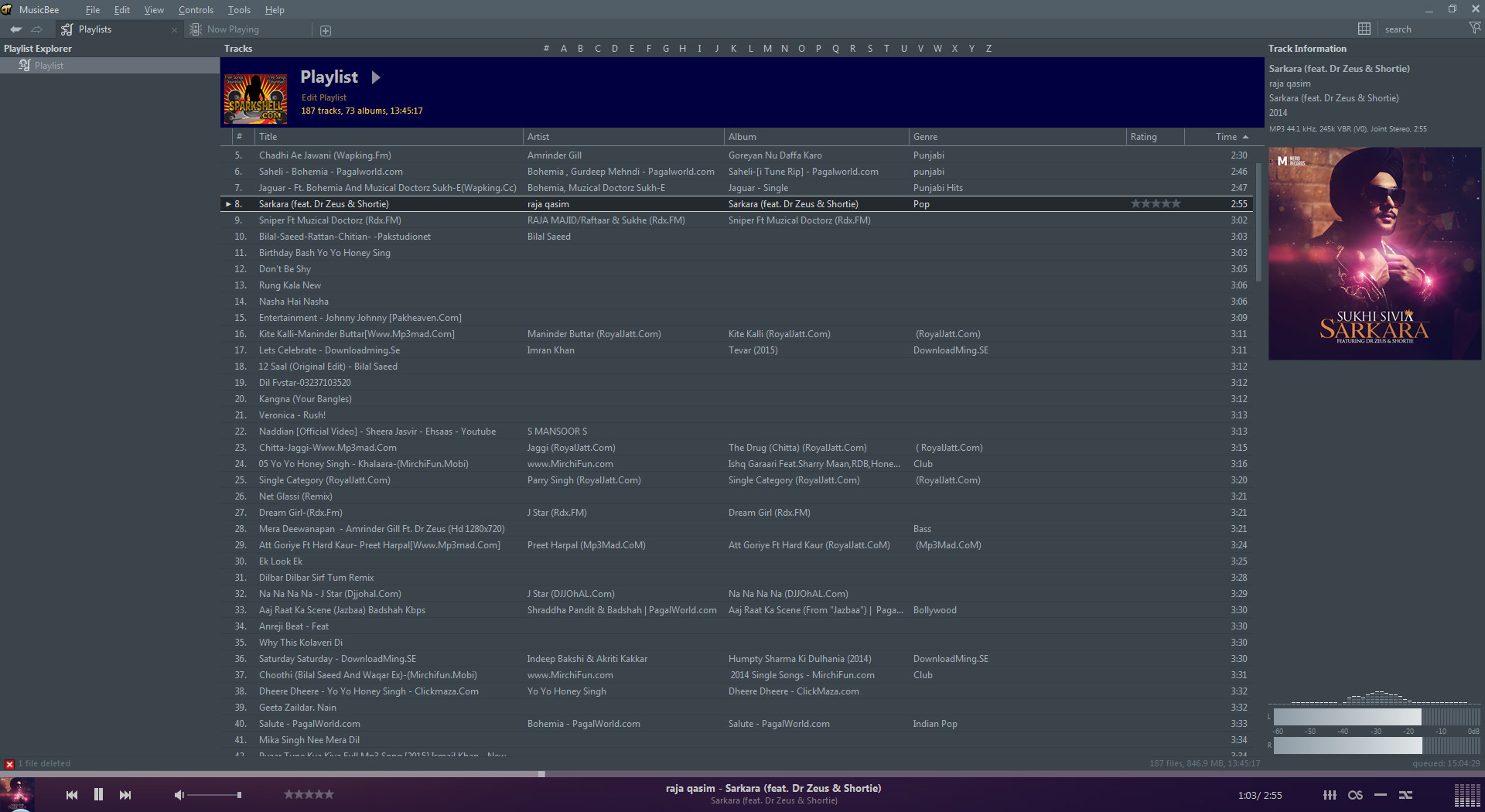 From here, it allows me to play files and delete them as they're playing - both to the Recycle Bin and permanently (with built-in hotkeys for both).

Another thing that sets MusicBee apart from the competitors I tried is just how customisable it is - the Options panel is chock-full of settings to be enabled/ disabled and panels to be added/removed, from changing the program's icon (with four included options): 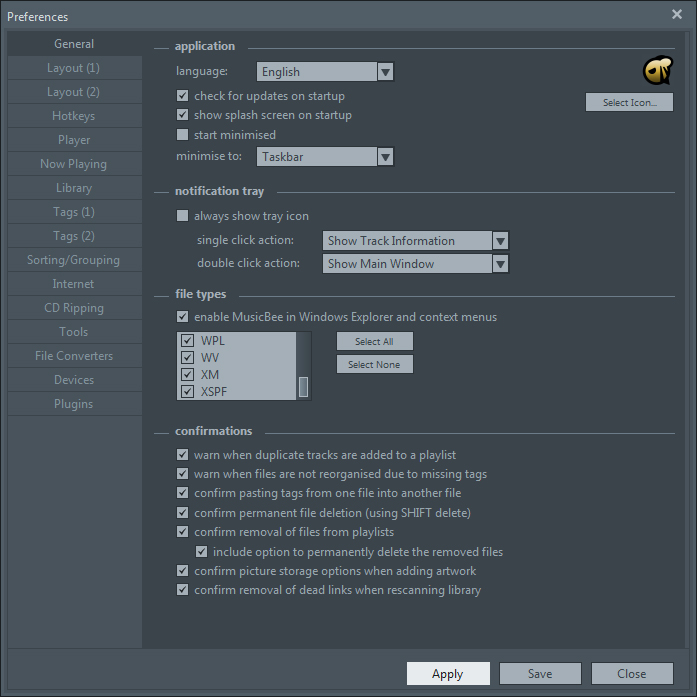 ...to changing virtually every component of the layout: 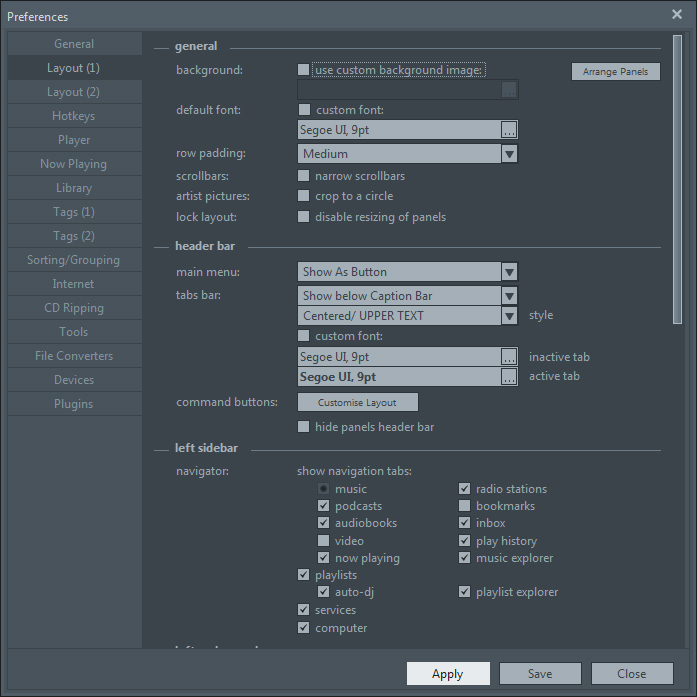 It also comes with visualisations, as well as built-in transcoders and skins (many of them dark, for those who are into that sort of thing), and many other powerful features.

Then there's the Theater mode, which is a big sell for me since I hadn't until today found a full-screen music player view that rivals that of (Windows 7's version of) Windows Media Player: 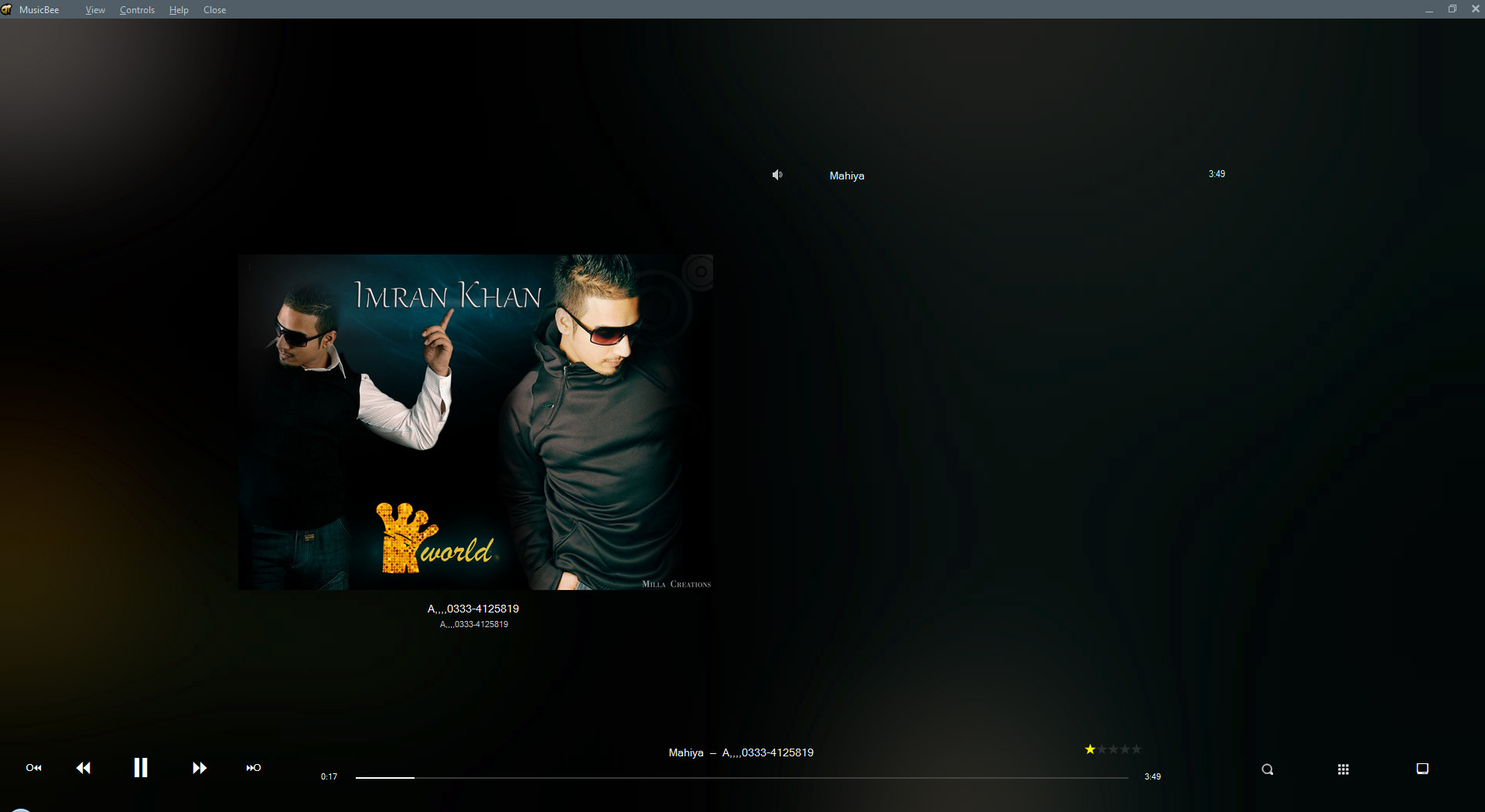 Finally, MusicBee is complete freeware. That's worth mentioning because at this point this answer is starting to sound like a product plug, which I apologise for, but it's very rare that I come across a product that I know will massively transform the way I do things and make me ten times more productive as a result.

PS. Please don't judge me for my music tastes, this is just one of many collections of music that I've inherited and am trying to separate the wheat from

Add the songs to a playlist, save the playlist as m3u, and feed it to rm.

Besides all the great answers that suggest using software such as foobar, you could make a pretty sweet shell script that iterates through the music in a given folder, plays each one, then uses bash's built-in select to give you menu options:

If you don't mind using WinAmp 2, the "File Delete" plugin requires minimum interaction. It basically adds a red 'X' button to the taskbar system tray (next to the clock in windows).

Play all your music in the background and when you hear a song you want to delete, click the red X and it deletes the file and goes to next file in the playlist. No need to bring up a the Winamp window.

Both Winamp and Clementine can delete files while playing. Clementine is now better than Winamp, and is still being updated regularly. Windows Media Player makes an awful music player.

I suggest using Windows File Explorer instead of WMP to do the finding and deleting of files. These would be the steps.

The advantage of this approach is that the original folder will only contain files that have require decisions. You don't have to keep track of anything, and you don't really have to do much searching.

I had the same problem, after some research on this thread. I downloaded MusicBee. I assigned the following hotkeys from the edit preference menu:

Then select both highlight playing from the "now playing" preference menu.

Now I can go through each track whilst playing using the arrows and pressing the delete key when I want to delete. Makes life so much easier and you don't even have to move your hand around on the keyboard or even use the mouse. Hope this helps. To make it even more quick, you can untick the permanent deletion confirmation, so that you don't have to press enter to confirm deletion.

1
My Music Folder Appearing On Desktop
6
Music player for Linux which remembers the playback position
13
How to play a folders worth of music/video in VLC media player
1
Show all File Types in Windows Media Player (WMP)
0
Search on WMPlayer Now Playing list
2
Windows Media Player adds Onedrive folder even after I've removed it
0
How do I sort my music library based on PlayerPro's .m3u files?