Is there a way to convert my router's "PON" interface (for fiber cables, see following picture) to a WAN interface (not LAN)? 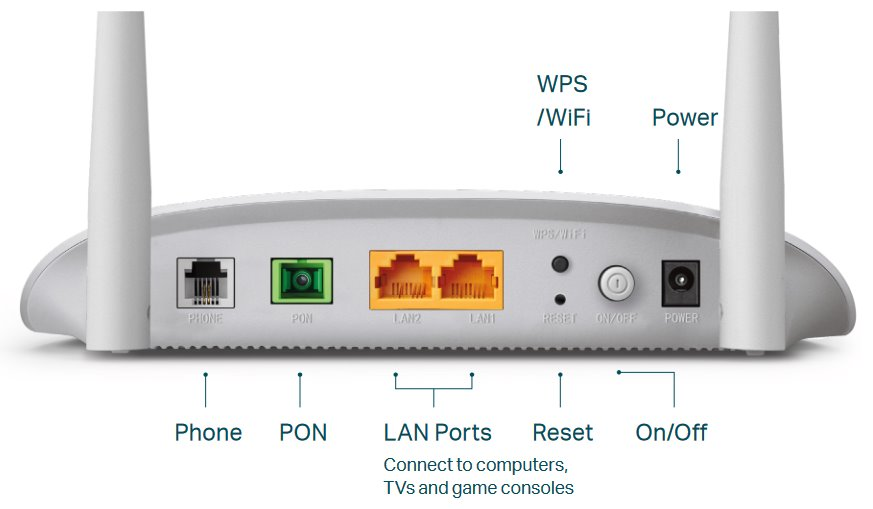 My final goal is to "see" the device as it was connected to the ISP (and visible from the Internet).

I've bought a media converter (TPLINK MC220L) and a SFP (TL-SM311LM), only to find out that I didn't consider that my fiber port is apparently "Simplex" while the TPLINK device supports only "Duplex" connections.

At this point I'm not really sure if I should buy another SFP or there's a different/easier solution that I'm not seeing.

Thank you very much in advance!

Is there a way to convert my router's "PON" interface (for fiber cables, see following picture) to a WAN interface (not LAN)?

It's already a WAN interface; that's literaly what it's there for.

I've bought a media converter (TPLINK MC220L) and a SFP (TL-SM311LM), only to find out that I didn't consider that my fiber port is apparently "Simplex" while the TPLINK device supports only "Duplex" connections.

Not exactly. When the MC220L product page says "Half-Duplex / Full-Duplex mode", that refers to the copper Ethernet port (and is a standard feature for all Ethernet ports, which normally auto-negotiate Full Duplex unless something goes wrong).

The MC220L does not care about whether the optical connection is duplex or 2xsimplex: it's all in the SFP module. It'll take your 2x LC SFP just as well as a 1xSC "Bidirectional" SFP; in fact the former are probably much more common. ("BiDi" 1000BASE-BX SFPs are probably not sold by TP-Link, but can be found at Fiberstore and just about everywhere else.)

Note that with a BiDi module, you have to pay close attention to what wavelength it sends at, vs what wavelength it receives at: e.g. if your router's datasheet says "upstream 1310nm, downstream 1490nm", the other end must have it in reverse.

(Note: This is practically where my knowledge on this topic ends.)

But the bigger problem is that the router's port is made for a completely different protocol, and as far as a I know, there are no SFP modules for what it wants on the other end. (Or rather it is not enough to just have a matching SFP – you also need a device that sends the correct data format.)

There are several different optical connections which go over a single "duplex" SC connector:

Your SFP module (and most BiDi SFPs you'll find) is made for ordinary Ethernet, which uses identical software and hardware on both ends. Your router, however, expects GPON and not Ethernet.

So even if you connect it to an SFP module with the correct physical parameters (1490nm/1310nm, etc.) it won't actually talk to a plain Ethernet device, it needs to be connected to an actual GPON OLT device instead.

Not the answer you're looking for? Browse other questions tagged networking isp fiber optical-cable or ask your own question.

2
Home Fibernetwork setup vs Traceroute results - where is my WAN IP located?
2
Is the external IP of my wireless Router my WAN IP / Public IP address ? if not then what is it?
1
Why am I seeing packets intended for other recipients while behind a router?
0
Getting only 100mb from isp and using 10 gigabit router
0
ONT Showing “Not Connected” When Using Media Converter to Connect the WAN interface to an Ethernet Network