My wife's 10 year old desktop computer failed some months ago, which necessitated the purchase of a more modern motherboard.

The original motherboard had both IDE and SATA ports and the computer has a 1TB Western Digital SATA HDD and two IDE optical drives, and is using Windows 7 'Ultimate' 32 bit OS.

The new motherboard has (6) SATA ports; no IDE port, and not wanting to buy new optical drives, I bought a couple of fairly inexpensive "40 Pin Convertor Portable Data IDE To Serial SATA Connector Adapter Hard Drive" to convert the drives to a SATA interface, and be able to use them. 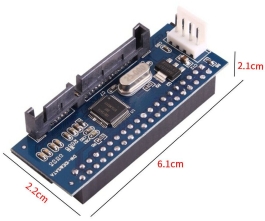 I've finally got around to fitting them this weekend, (they plug into the 40 pin IDE connector at the back of the drive) but they appear to have been spectacularly unsuccessful!

The drives aren't recognised in the BIOS, despite me trying just about everything I have read both here and elsewhere.

I've checked the selection jumpers - they were both on CS (cable select) and have been moved to M (master). No joy.

I have plugged the drives into SATA ports 5 and 6 which can be set as IDE in the BIOS; have 'told' the BIOS they are 'CD-ROM' drives and also tried 'Auto'.

Is this adequate? (If it isn't - well, as all the Molex connectors in the harness are also female, I have a serious problem!!).

Has anyone had any success with this type of adapter?

If so, I would be delighted to know what the secret is!!

et me add that, as expected, data or information on the adapters is zero! (You can see them on eBay at: https://www.ebay.com/itm/40-Pin-Convertor-Portable-Data-IDE-To-Serial-SATA-Connector-Adapter-Hard-Drive/274054074053). Oh, and both optical drives worked - perfectly - as IDE drives, and as they haven't been used or even powered since then, it's extremely unlikely they have both suddenly failed.

I've noticed in the motherboard manual that it suggests that optical SATA drives are best plugged into SATA ports 5 and 6; that they are defined as 'CDROM' in the BIOS and that the ports are set to be IDE and not AHCI.

So, I've tried that - and as before, the BIOS claims that the devices installed on those ports are 'ATAPI incompatible' and show as 'not installed'.

In other words, not a scrap of difference!

I've also tried uninstalling the IDE adapter in the Win Control Panel, and allowing it to - hopefully - 'find' devices.

You probably won't be surprised to learn it doesn't.

I won't give up yet - I'm still hoping that someone can advise whether the SATA power connector is sufficient, or whether I have to plug power in via the Berg connector (and hence get/make some male - male Molex connectors).

But it's increasingly looking like these adapters are a proverbial lemon!!

I won't give up yet - I'm still hoping that someone can advise whether the SATA power connector is sufficient, or whether I have to plug power in via the Berg connector (and hence get/make some male - male Molex connectors).

Plug the Berg connect in to the adapter then plug the molex straight into the optical drive. Plug the Sata power cord into the adapter. Voila! I was doing same thing you were until I saw this video https://www.youtube.com/watch?v=Lsxd9Ide6qs

My optical drive was set to Cable Select mode. Be sure to switch this to Master (Master worked for me I didn't try Slave).

Not the answer you're looking for? Browse other questions tagged bios sata dvd ide cd or ask your own question.

1
Is it safe to use an IDE to SATA power adapter for an extended period of time?
1
Why does my motherboard not pick up PATA HDD using a SATA adaptor?
0
IDE to SATA converter not working
3
Motherboard HDDPWR1 connector
2
How to Add Additional SATA Power Connectors?
1
SATA devices not recognized by BIOS
0
Which Connecter Is The Correct One
1
IDE to SATA converter not working. Incompatible or faulty?
0
Sata drives not recognized in BIOS after motherboard change