IrfanView replaced my Settings' and Your Phone's icon

I have nearly brand new Windows 10 1903. A day after installing it from scratch, I have installed Irfan View as well. Another day later I have realised that it has (?) replaced my Settings' icon: 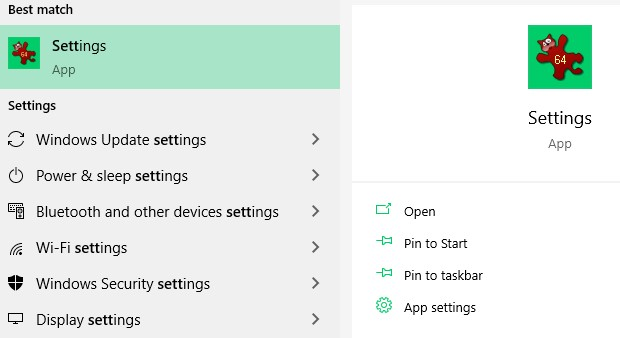 Things that I tried so far:

The last one has actually killed me. I was more than sure that completely removing the program that caused (probably) icon to be replaced (and then performing another icon cache purge) will resolve the issue. Yet, it didn't. IrfanView is gone from my system, replaced Settings' icon remains.

A really weird thing (?) happened when performing step 3. After clicking Reset Windows 10 has reset the default app for photos to... IrfanView. Had to manually "reset" it to Paint (the original Photos app is uninstalled).

What can I do to get rid of it and get Settings' original icon back?

Edit: The issue is not limited to Settings. I have just noticed that Your Phone component also has Irfan View's icon instead of default one:

Back in April 2020 I had this same problem and after trying many proposed solutions in the the end including all those suggested by the OP I eventualy found that changing the Display Scaling in Settings from the recommended 150% to 125% and then back to 150% fixed it for me. The inspiration for this came from this answer to a similar question Icons not showing in windows 10 search.

However, fast forward to October 2021 and the problem re-occurred and the earlier Display Scaling switching did not fix the problem this time! After some reading I found this solution to a Some Windows 10 UWP icons not displaying on search, or in settings problem and it seems possibly that my new problem was potentially caused by an upgrade from Google Backup and Sync to Google Drive File Stream. In this solution the Display Scaling switching, deletion of all keys under HKEY_CLASSES_ROOT\.png\ShellEx was required as well beforehand (and presumably to prevent new keys being added, the permissions for the ShellEx key are removed for Administrators).

In the suggested solution I skipped one step, and so this is what I actually did:

I.e. I didn't need to reboot or logout for the fix to take effect (and I only have one monitor and so didn't need to power any additional monitors down). I did have to wait about 5-10 seconds after performing a Display Scaling switch as the problem was not fixed when I initially performed a Windows start menu search immediately after the Display Scale switch. Presumably it takes some time taken for the search icons to be regenerated in the background after a Display Scaling switch has been made.

Not the answer you're looking for? Browse other questions tagged windows icons cache windows-10-v1903 irfanview or ask your own question.

38
Icons not showing in windows 10 search
20
Some Windows 10 UWP icons not displaying on search, or in settings
0
Icons in windows Start Menu / Search are gone and replaced with another app