COUNTIFS - How do I match text with < and > characters

My countif is getting confused with the "<" in the text, and I guess its taking the literal meaning of it.. any way out of it? 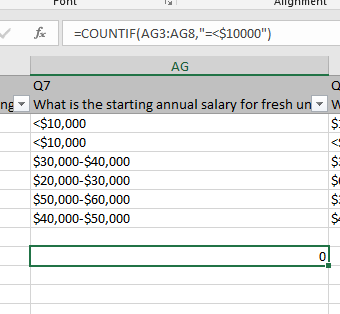 Trying to use certain functions like COUNTIF to compare against a literal value starting with an inequality symbol is a problem because of how the function tries to use the target string.

You have some mismatches between the formula in the question and the one in the screenshot that contribute to the problem (difference in equal sign and cell values that contain a comma), but I'll just address the solution.

There are a few ways you could deal with the inequality symbol, like:

Either would require prefacing the target with an equal sign, which is actually sufficient by itself to be the solution. You were almost there; the formula in the screenshot would have worked without the typo.

Using an explicit equal sign works when a text string starts with an inequality symbol. So your formula in the screenshot, but correcting the typo:

0
Excel - find and remove text, surrounded by varying characters
0
Shortening an Excel formula if possible
2
Sum drop down boxes with text
0
Functions (specifically text functions) within a countif function
0
Using value of cell to search text of another sheet and highlight cell if match is found
0
Comparing two uneven lists for differences
1
How do you count a range of numbers with specific text?
0
countifs with summed rows compared to an average
1
Countifs for data starting with a certain number
0
Simple regex with Excel COUNTIF to match a substring?