Windows 10 equivalent to OSX's ⌘+D to navigate to my desktop, ⌘+Shift+H for Home, ⌘+shift+A for apps etc

In finder on OSX there are shortcuts to special folders like the user's Desktop, the user's Home directory and the Applications directory (from memory it's ⌘D for ~/Desktop, ⌘shiftH for ~/ and ⌘shiftA for /Applications, but it's been a while since I moved to the dark side, so please feel free to edit).

One thing that's always bugged me is that there is no equivalent for Windows. To navigate to my home folder is particularly annoying, I have to go My PC>C:>Users>stib> which is way too many clicks. So is there an addon or hack that mimics the OSX behaviour? Ideally it would work in open file dialogs as well as in Explorer.

EDIT Here's what I tried with AutoHotKey

That works in some dialogs, but not all. For example the dialog that opens with notepad++ looks like this, 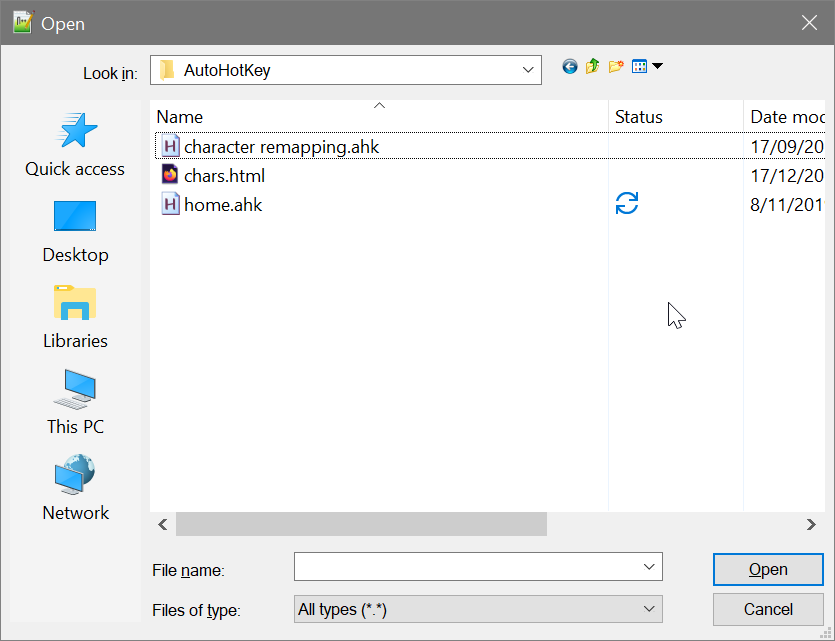 and neither the ctrll nor altd shortcuts would move focus to the address box. So that script would send the word "Documents" to the name box, resulting in it creating or opening a file called Documents in whatever folder it happened to be open in. The workaround is to send the absolute path to the Documents folder, but it's still a bit brittle. If focus is moved away from the dialog for any reason (eg a notification window from another ap opening) the script will send keystrokes to random elements. Not optimal.

The structure of file system one Windows is different from the Mac, so sometimes there is no strict equivalent.

You can use the shortcut ⊞ Win+D to minimize all open windows and see the desktop. Use it again to restore those open windows.

In File Explorer, This PC is technically your home folder. For example, let's say you have a folder named Test on the Desktop. If you go to This PC > Desktop > Test, now check the address bar and you will see C:\Users\stib\Desktop\Test. In Folder Options, you can change what File Explorer opens to. You can choose This PC, or Quick access.

But more accurately, your home folder is actually your name in File Explorer and it is displayed at the same level along with Quick access and This PC.

Not the answer you're looking for? Browse other questions tagged windows-10 macos keyboard-shortcuts cross-platform or ask your own question.

31
OSX Keyboard Shortcuts in Dialogs?
7
Is there some way to disable the dialogs shown when opening an application for the first time?
2
Ctrl-Shift-P opens font dialog in Word 2010 instead of focusing on font size in toolbar
0
Can I securely trash a folder that contains applications without ruining the applications on my HD?
0
How do I set up the “Show Deskop” shotcut key for the R.A.T 9 mouse
1
Difference between the keyboard shortcuts “Windows key” and “Windows key + S”?
1
In Windows 10, how do I change the default view (details, tiles, etc) for the Open and Save As dialog boxes?