I had an operating system corruption problem on a Windows 7 machine. I gave it to a local technician to diagnose and asked, if all was well with the hardware, to reload the OS from my back up. The setup he did on the install didn't match the old one in that when he named the computer and created the user profiles they weren't able to access the OLD UP's that were in the back up. (I'm not sure he could have done it differently)

The old computer name was "MAX", the new one was "Rich". My old user profile was "Rick", the new one is "Rich". The pictures and other data under one old profile were not found. It was on the disc, just not accessible in the profile.

I get the bright idea to combine the 2 profiles for each user and delete the one not wanted. It seemed to work out OK, but I have questions before I delete the old one.

The blue dots are the ones I want to retain. All the rest are old, legacy users. I am unsure of the following:

I have folders under the root that are marked Tammie and Rick respectively. Are these folders linked to, and/or a function of, creation of a user profile? I suspect not as I do not have folders for any of the other users. 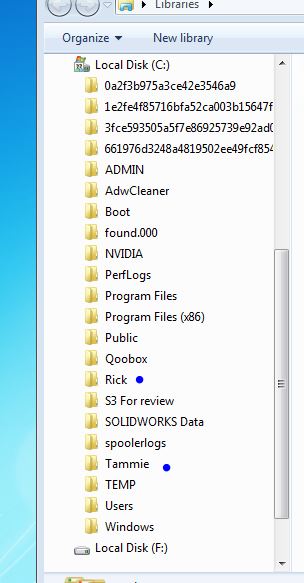 Both the named user folder and these folders have similar tree structures.

Do folders in "User" have different rules than folders in the Root directory? Would one be easier or better suited to combine all the folders and files than another? I'm going to have to move them back anyway after the "house cleaning" right?

I'm almost to the point of trying to create nonsensically named user profiles (for positive ID's sake) for both Rick and Tammie, combine all the files and folders from all associated legacy users folders into their specific, new, folder, go and delete all the unwanted profiles registry deep (I know where to go), then go back and rename the remaining profiles to what I want them to be.

Would there be something lurking in the weeds along this path? I'm not scared of it, but I do recognize I know enough to get in trouble but not enough to see it coming.

You can change the computer name to whatever you want, at any time.

Some of the "NEW" User Profiles (the ones I want to delete) have a lock icon.

The lock icon is only visible when you are logged in under other accounts, indicating that they do not have access to those folders.

Not the answer you're looking for? Browse other questions tagged windows-7 windows user-accounts user-profiles or ask your own question.