How can I reach a single local machine through OpenVPN?

This looks like a trivial question, but I couldn't find the answer yet.

In this picture you have my networks topology: 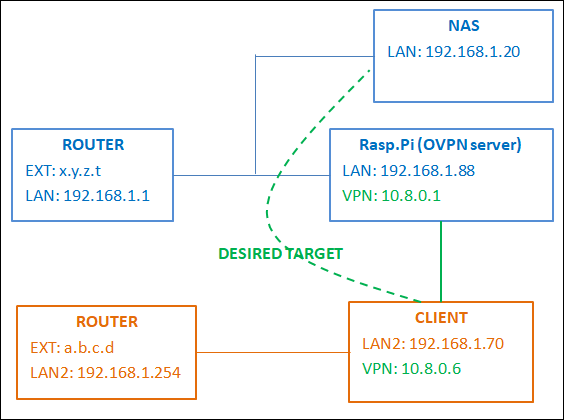 I can connect OpenVPN client to its server. I know I have a subnet conflict but I cannot change the subnets.

I can connect using the Windows client, but I cannot ping or access anyway the NAS. I am sure I am still missing something, but couldn't figure out how I can route the traffic. I have read many topics on the subject, but still no luck.

I should be able to add a routing rule in the router that is over the OpenVPN server network, if needed.

I have two main requirements:

Tom Yan and this article helped me getting a solution to first issue. I believe second issue is still uncovered.

In server configuration I needed to add (uncomment) this line, to ensure routing requests from the OpenVPN client to the NAS:

To enable routing from the NAS back to the OpenVPN client I added this routing rule in the NAS:

adding this line in that (empty) configuration file

And a service network restart ensured the static route to be applied.

After that, I restricted traffic in the Raspberry Pi through iptables. I actually made it permanent installing iptables-persistent and following this guide.

Yes, I need many clients to be able to connect and I guess I should avoid NAT and masquerading for this reason.
routing openvpn
Share
Improve this question
edited Nov 18 '19 at 17:02
Kar.ma
asked Nov 15 '19 at 18:12

You need to add a route for 10.8.0.0/24 (where the gateway would be 192.168.1.88, i.e. Rasp.Pi the OVPN server) to either NAS or ROUTER (assuming ROUTER is the default gateway of NAS in that case, of course), so that NAS/ROUTER would know where to direct the reply traffics.

If you cannot, you will need to do SNAT/MASQUERADE with iptables (or nftables, of course) on Rasp.Pi so that all traffics from the VPN clients would appear to be originated from the server.

The client must not be able to access any machine other than the Raspberry and the NAS itself.

Make sure you limit forwarding traffics with iptables. Once you have enabled IP forwarding on Rasp.Pi (you have to, otherwise the VPN clients won't be able to reach its LAN), a client can add whatever route he/she needs to reach a certain host in the server's LAN, so just not pushing certain route is not going to help you achieve that.

To enable IP forwarding (and make the setting persistent over boots):

To allow only forwarding that you need in this case (eth0 and tun0 are assumed):

To do source NAT for forwarding traffics (so that you don't have to configure return route on NAS / ROUTER) that goes out via eth0:

or, if the IP of eth0 is persistent over time/boots:

P.S. If you want to flush the tables you touched, you can do:

Also note that iptables commands are not persistent over boots, so you will want to save the rules to a file with iptables-save (and configure your system to restore them on boot by some means).

You should really check out the above for how to properly configure the FORWARD chain (in the filter table). Without the DROP policy (or a "default" DROP rule at the end), any ACCEPT rule would be useless. (And your rule wouldn't be enough once you fix the DROP part)

To avoid subnet (more precisely, route) conflict, it's best to push a host route (it's what you need anyway) instead of a subnet route, so you should push "route 192.168.1.20 255.255.255.255" (the subnet mask can actually be omitted) instead, as the chance that a client host would have a host route to a LAN host (other than the default gateway) is much lower (a subnet route is always added on Linux when a non-/32 address is assigned to an interface).

Not the answer you're looking for? Browse other questions tagged routing openvpn or ask your own question.